Dauda discussed a number of topics including his sixth place finish at 2022 Olympia, battling with Big Ramy, and what his plans are for the 2023 Arnold Classic in March. 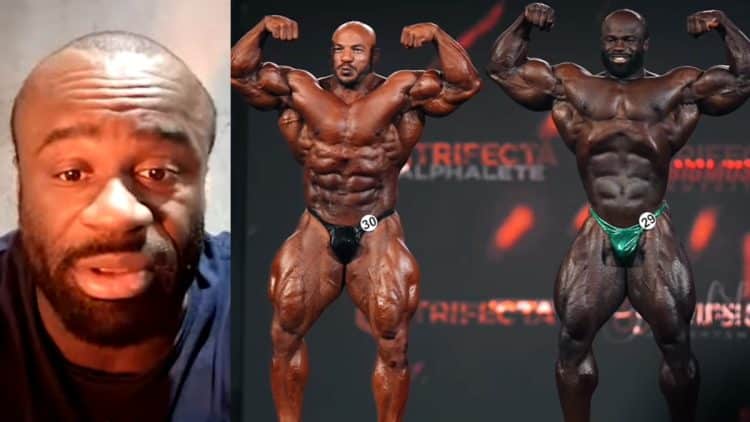 Samson Dauda turned in an exceptional debut performance a few weeks ago at the 2022 Olympia contest, where he finished sixth. In a recent video, ‘The Nigerian Lion’ recapped his first Olympia experience, detailed his battle with former champ Mamdouh ‘Big Ramy’ Elssbiay, and looked ahead at the 2023 Arnold Classic in 10 weeks.

Mass monster Samson Dauda has already made a name for himself in the IFBB Pro League. His fullness, round muscle bellies, and balanced proportions make him a dangerous foe on any bodybuilding stage. In 2021, fans took notice of his muscular frame after placing second behind Nathan De Asha at the Arnold Classic UK and third at the Yamamoto Cup Pro.

He leveraged that success with a runner-up showing at the Romania Muscle Fest Pro — and claimed the 2021 EVLS Prague Pro title in November, which served as his first pro show victory. While this qualified him for 2022 Olympia, Samson picked up a pair of fourth place finishes at the 2022 Arnold Classic and Boston Pro, respectively.

Dauda proved to be a dark horse in his debut at 2022 Olympia. During pre-judging, he stood next to Big Ramy and pushed the former champion throughout the contest. Samson would narrowly miss out on the top five in sixth place. In his latest endeavor, Dauda joined Ron Harris from Muscular Development to recap the performance and to talk about what’s next.

Samson Dauda On First Call-Out/ Big Ramy Battle: ‘It’s Overwhelming When These Big Names Are in Front Of You’

According to Dauda, he was 16 pounds heavier at 2022 Olympia from the Boston Pro last March.

“Yeah, between Boston Pro and now [I gained 16 pounds]. I didn’t know that at the time. I only found out after the show about the weight difference between Boston and here [2022 Olympia],” says Samson Dauda.

Samson said competing with big names was different from what he expected.

“Oh man. Honestly, you know, the thing is, people don’t know. When you’re backstage and you’re at a big show and you know all the big names and all the big stars and you see them face to face — it’s so different. People always say, ‘oh I saw the clips, I saw the pictures.’ Trust me, when they are right in front of you it’s extremely different. It’s so overwhelming.”

Coach Milos Sarcev told Dauda to ‘fight for his place’ against Big Ramy as they were positioned next to each other at the start of prejudging.

“When I did the first call-out with Ramy next to me, trust me, I didn’t have a clue how I was looking next to him because you can’t see yourself. I just know that — Milos told me, ‘look: your number is next to him, don’t back down. Get him. Fight for your place.'”

“It’s overwhelming. You look at the [lineup] and go holy crap, okay, this is the Olympia. I get it. I really get it now. You stand there and I remember standing there and thinking, you know what, ‘if I get second call-out I’m not going to be mad.”

Despite his trepidation, Dauda’s confidence grew once he knew he made it to the first call-out.

“For me, at that point [making first call-out] that was a confirmation of the moment. Like, yeah, I knew I could do this, and I believed without a doubt that I could do this. That was an eye opener. It was for a lot of people, but for me, it was the biggest eye opener. You can dream and work hard but you don’t actually know what happens until it happened.”

After pushing Ramy on stage, Samson shared that it gave him motivation for next year.

“I’ve heard that a lot [that Ramy wasn’t going to beat me]. But the thing is, when you’re so happy about just being there, being in the top six, you don’t sit back and go, ‘well, I’m happy with this but I wish I could have…’ you don’t. You just don’t have that in you. You’re so excited about it. And then what happens is, it gives you that motivation [for the future].”

Dauda: ‘The Plan Was Always to Do the 2023 Arnold Classic Regardless of What Happened at 2022 Olympia’

‘The Nigerian Lion’ had his sights set on the Arnold Classic long before competing at Olympia a few weeks ago.

“Before the Olympia, we were already planning on doing the Arnold. I did it last year and absolutely loved the show, it was awesome. So, when we were about six weeks out from the Olympia, I had already put my application in. I wanted to do the Arnold.

“Regardless of what happened at Olympia, this was always going to be the plan.”

Before ending the discussion, Dauda promised an even better package for 2023 Olympia. He credited his intense off-seasons for such drastic improvements in a short period of time.

“We see what we are able to do in the time we’ve had. We’ve seen year by year how much I can put my head down during the off-season. A few guys might not take the off-season as seriously. They think the off-season nis where you just rest.

I always say the off-season for me is the same as prep, all it means is just more food — nothing changes. The focus is just as intense,” says Dauda. “That’s how we are able to improve year by year and keep going. I want to be better than I am now at next year’s Olympia.”

The last time fans heard from Dauda he reflected on placing sixth in his debut at Olympia. After giving thanks to his team and the IFBB Pro League, Samson plans to use the recent success as fuel for the future.

RELATED: Milos Sarcev On Samson Dauda’s 6th Place Finish at 2022 Olympia: ‘He Should Have Beat Nick Walker for 3rd Place’

In just 10 weeks, fans will have the privilege of seeing Dauda perform in Ohio for the second year in a row.

Hadi Choopan Gets a Hero’s Welcome in Iran After Winning 2022 Mr. Olympia