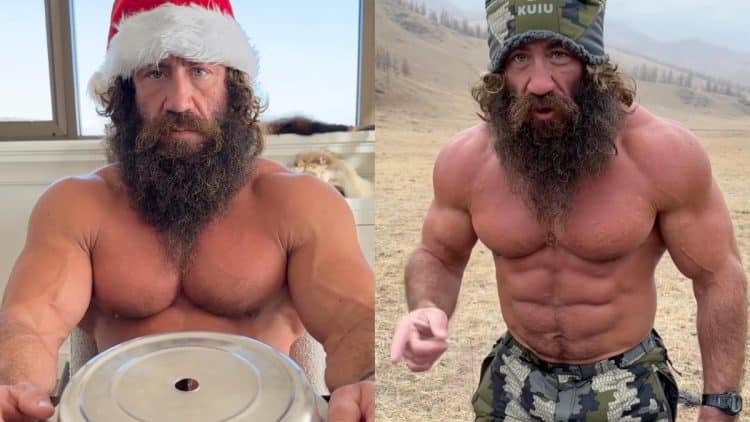 Internet sensation Liver King, real name Bryan Johnson, first made headlines for his insanely jacked physique and unique eating habits. He quickly amassed over 1.7 million followers on Instagram as clips of him eating raw meat did rounds online. However, the house of cards came falling down after he got exposed for his steroid use. He recently got hit with a lawsuit from a New York-based customer who alleged Johnson deceived him and other customers into purchasing his products.

Liver King promotes a natural way of living based on the nine ancestral tenets which includes eating cuts of raw meat and organs like liver, brain, bone marrow, and bull testicles. The 45-year-old credited his jacked physique to eating raw meat and encouraged fans to follow in his footsteps.

Although some were convinced by Johnson’s message, others were not fully sold. UFC color commentator Joe Rogan was an outspoken critic of Johnson and dismissed his character as a gimmick. He made no hesitations in stating that Johnson was on steroids and believes he only put on a show to get famous.

Johnson was asked about his natty status on multiple occasions but he repeatedly denied allegations of steroid use. On Nov. 25, popular performance-enhancing drugs (PED) expert Derek of More Plates More Dates (MPMD) exposed Johnson’s gear use. He shared leaked emails that showed Johnson’s alleged steroid cycle along with his blood work.

While Johnson did not respond immediately, he later uploaded a confession video admitting to lying and misleading a lot of people. He apologized for deceiving his fans about being on the juice and came clean regarding his current use as well.

Christopher Altomare sued Liver King and his companies (Ancestral Supplements LLC and The Fittest Ever LLC) for $25 million on Wednesday. Johnson promoted his brands by “consistently” appearing shirtless to “showcase his muscular physique” and for portraying “himself as the epitome of health,” according to the Manhattan Supreme Court lawsuit.

The New Yorker further claims in the lawsuit that Johnson deceived his customers to follow a ‘dangerous and life-threatening diet’ which resulted in ‘severe’ food-borne illnesses.

“Liver King persuaded millions of consumers to adhere to, or abide by, the Eat Tenet by repeatedly making representations to consumers that his near-perfect physique, and optimal health, were solely attributable to his adoption of the Ancestral Tenets, predominantly the Eat Tenet,” the statement read.

Liver King’s former coach ‘Vigorous Steve’ weighed in on the recent developments. He called out Liver King for trying to make him his secret drug guy and stated that Johnson was covering up one lie with another.

Derek of MPMD shared a similar sentiment earlier this month when he suggested that the Liver King steroid scandal was not over. He was not convinced by the apology video and believes there’s more to this story that has yet to be made public.

Liver King has owned up to the lie since his leaked cycle went viral. He further expressed his willingness to be natty but added that it would take some time to get off gear.

He recently tried to dispel the rumor that he got ab implants by visiting a doctor. Time will tell how he handles the latest $25 million lawsuit.

Terrence Ruffin Withdraws From 2023 Arnold Classic: ‘I Won’t Be Defending My Title; ‘The Goal Is To Grow’