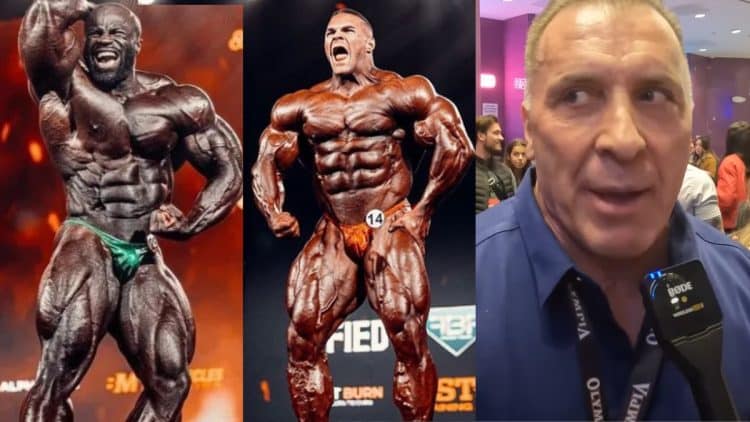 Bodybuilding coach Milos Sarcev is critical of Nick Walker’s third place finish at 2022 Olympia. In a post-show wrap-up, Sarcev shared that Dauda should have placed third instead of Nick Walker.

Over the weekend, the 2022 Mr. Olympia contest concluded with a ton of surprises. Iran’s Hadi Choopan defeated the former two-time champ Mamdouh ‘Big Ramy’ Elssbiay, who was knocked down all the way to fifth place. Former 212 Olympia Derek Lunsford capitalized on the special invitation he was given in Sept. and pushed Choopan during the finals. He ultimately finished second with Walker moving up to third place.

Brandon Curry and Big Ramy finished fourth and fifth. Samson Dauda, a bodybuilder many hailed as a dark horse heading into 2022 Olympia, was sixth in his debut on Saturday. The anticipation to see Dauda perform was high considering he was one of the biggest athletes on stage. Earlier in the season, he revealed he was weighing over 330 pounds.

Before the contest went down, Sarcev was vocal about Nick Walker‘s potential placing. He said Walker would fall out of the top six. Following ‘The Mutant’s’ latest third-place performance, which also garnered him the People’s Champ Award, Sarcev still believes Dauda’s package was better. He joined former 1983 Mr. Olympia Samir Bannout to recap one of the most shocking and exciting Olympia contests ever.

Sarcev congratulated Choopan on becoming a champion and proceeded to break down some of the top finishers from 2022 Olympia.

“I’m super happy for Hadi. For me, Hadi could have two titles already, 2019. It couldn’t have happened to the more deserving guy. He was the best package, the best conditioning, nothing missing. My hats off to him. I’m really happy for him.”

According to Milos, Lunsford could have possibly won, but the ‘softness’ in his chest, shoulders, arms and abs held him back from gold.

“Second [place] Derek [Lunsford] — was a surprise of course. I said in a podcast about a month ago when they asked me, can he possibly win, I said, ‘of course he can win.’ It’s just if they’re going to look for the shape,” says Milos Sarcev. “He still had softness through his chest, shoulders, arms and abs. If you look at anybody who is going to analyze, he’s not the same conditioning from the front and the back.”

Not only does Sarcev believe Dauda should have taken Nick’s spot in third but went as far to suggest Dauda could have beaten Derek Lunsford ‘pose by pose’ for second place as well.

“Nick [Walker], if you ask me, there’s no way that Nick should have beaten Samson [Dauda] in any shape or form. In bodybuilding, you look for the best body, the best shape, the total package, so for me, of course, I would be biased but yeah.

This is how I look at it: Samson could be battling for that third place, actually even second because standing next to Derek and go pose by pose, there’s going to be many reasons he could have won [that comparison].”

Before ending the conversation, Sarcev touched on Ramy finishing fifth and discussed what’s next for Samson Dauda.

“Big Ramy — no one expected he would be pushed down so much. It’s kind of a surprise,” Sarcev said. “Sixth for Samson, we are very very happy. First Olympia to get in the first call-out in the top six. It’s his first Olympia. And a lot of experts that know about bodybuilding see him as future threat because of his combination of everything — size, shape, thickness, width, crazy presentation, so yeah.”

He added that Hunter Labrada came in lacking conditioning similar to 2021 Olympia.

“Hunter Labrada… I’m sure disappointed. He didn’t deliver again. He has all the tools — he just needs to be like his father. His father was never out of condition on stage. Never. I wish he helped him [more].”

Dauda reflected on his recent performance via Instagram yesterday. The mass monster is ‘over the moon’ after finishing sixth and is hopeful about his future in the IFBB Pro League. He plans to use the placement as fuel for competitions on the horizon.

The Men’s Open division underwent huge changes over the weekend. While Sarcev believes Samson deserved to beat Nick Walker for third place, he’s happy with the outcome and optimistic about his client’s future in the sport.

Big Ramy Opens Up on Finishing 5th at 2022 Olympia: ‘When I Know Why I Got This Placing, I Will Fix It’