Dauda is looking absolutely massive in the off-season 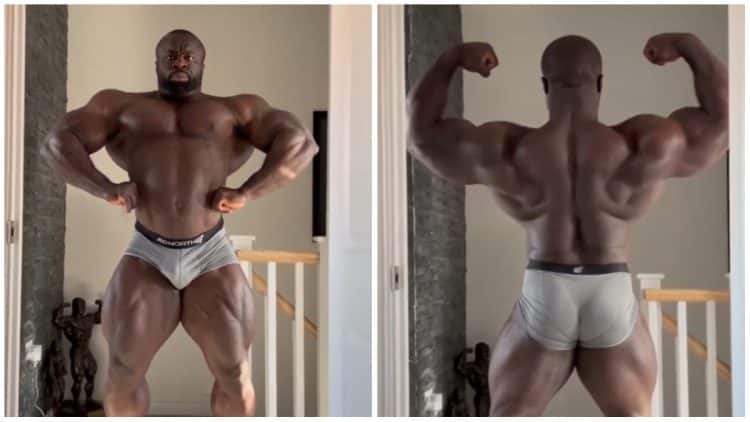 Bodybuilder Samson Dauda revealed that he has bulked up to a humongous 324-pounds in the off-season ahead of 2022 Mr. Olympia.

Samson Dauda made headlines last year as a Men’s Open standout. He competed at two IFBB Pro events. Samson scored second at the 2021 Arnold Classic United Kingdom and then got third place on the podium at the Yamamoto Cup Pro.

Dauda was determined to improve his physique for his next outing at the 2022 Arnold Classic. Following his showing in Ohio, one of the biggest takeaways was his memorable posing routine, which featured a tribute to Kevin Levrone. However, Brandon Curry had other plans and lapped the competition to take home the first prize. Dauda’s second showing this year was at the 2022 IFBB Boston Pro, where he was ranked fourth place. In one of his latest off-season physique updates, Samson revealed his weight is sitting at 320-pounds.

Dauda has an incredible definition in his lower body and giant stature. As his next show approaches at 2022 Olympia, he will be tinkering with his diet and water intake to ensure he brings the best package possible without sacrificing conditioning.

Bodybuilders are known for pushing size as Open class competitors are celebrated for their impressive proportions and sheer muscle mass. Every year, athletes push the envelope but size and mass alone are not enough to guarantee success on stage.

Taking to his Instagram story, Samson Dauda shared an update of him tipping the scales at 324-pounds with his fans.

He followed up by showing off his gargantuan physique in a posing routine.

Samson Dauda is in a good place during this off-season. Once he makes the final touches to his physique, he will be a force to be reckoned with at 2022 Olympia. While having more muscle is generally better, it’s important to maintain aesthetic symmetry and condition.

One of Dauda’s former opponents, 2019 Mr. Olympia Brandon Curry has said he plans to add size to combat Big Ramy at 2022 Olympia, scheduled for December. Should Samson’s retain this weight, he will be incredibly hard to stand next to on stage. Dauda could turn out to be the dark horse with his new and improved look.