No Result
View All Result
Diet Plans
Evidence Based
Evidence Based Research
This article was written by one of our qualified writers, and fact-checked by our experts. The numbers in parentheses (e.g. 1, 2, 3, etc.) throughout the article, are reference links to peer-reviewed studies.
Our team of experts include a board-certified physician, nutritionists, dietitians, certified personal trainers, strength training experts, and exercise specialists.
Read Our Editorial Process 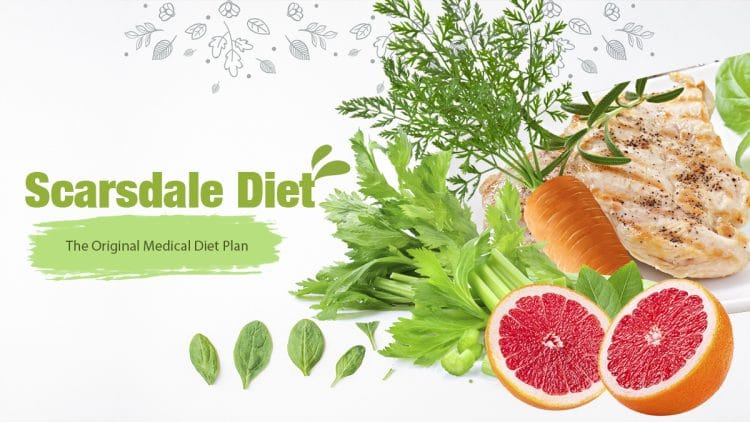 The Scarsdale diet is a diet program that promises dramatic weight loss in a short amount of time. This diet was popular among dieters in the 1970s but has drawn a significant amount of criticism since it was first created.

Severely restricting the number of calories that you consume each day, which is a hallmark of the Scarsdale diet, can have some potential risks that you need to be aware of.

Read on to find out everything you need to know about the Scarsdale diet and if you should give it a try.

The History of the Scarsdale Diet

The Scarsdale diet got its name from the place that it was originated in: Scarsdale, New York. It was originally started by a cardiologist who created a short paper on performing the diet. Dr. Herman Tarnower later wrote a book in 1978 about the diet program that he created after he heard many success stories from those that implemented his diet approach.

The book that Tarnower created was an instant success due to the claims that he made of instant results in losing weight. It promised that followers would be able to lose 20 pounds in under two weeks adhering to the diet.

However, Dr. Tarnower passed away shortly after the book was published which sparked some conspiracy theories around the reason for his death, leading to a continued increase in the popularity of the diet.

Today, the Scarsdale diet is highly criticized due to the drastic caloric restriction and the fact that the diet is only fourteen days long. After the diet is over, you will typically return to your previous eating patterns which will increase the chances of putting the weight back on.

In addition, the Scarsdale diet restricts certain foods that are considered to be healthy by today’s standards such as avocados, beans, and lentils. Because of the extreme criticism from the medical community as a whole, the Scarsdale diet is no longer in print.

Even with its criticisms, the Scarsdale diet has proven to be effective in some scientific studies. For example, a 1982 study found that 20 overweight patients did experience more weight loss than the other participants who did not participate in adhering to the diet program. [1]

While the original book that Dr. Tarnower published isn’t available in print versions, there are some copies that are sold online as well as on some unofficial websites with information on the Scarsdale diet.

Before you get started on the Scarsdale diet, you need to know the macronutrient breakdown of what you will be following. This diet consists of consuming 43% protein, 22.5% fat, and 34.5% in carbohydrates. In addition to avocados, beans, and lentils, you are not allowed to consume white potatoes, sweet potatoes, and rice, among others.

The diet also restricts your amount of calories to 1,000 per day, which is most likely going to be well under what you are currently consuming each day.

In addition to the caloric restrictions, you cannot consume any type of snack except for celery, carrots, and certain types of vegetable soups. Water must also be consumed frequently, at least 4 cups per day, however other liquids like coffee, tea, or diet soda are allowed on this diet.

Adherents are only required to be on this diet for 14 days, after which you are to go back to your normal eating patterns. This makes the Scarsdale diet only useful for short-term weight loss and is not a long-term solution.

Dr. Tarnower also created what is known as the “Keep Slim Program” which is a version of the Scarsdale diet that is not as restrictive.

The Keep Slim Program allows adherents to introduce some of the banned foods on the original Scarsdale diet, such as bread and baked goods. Alcoholic beverages are limited to only one per day.

The Keep Slim Program is designed for adherents to keep the weight that was lost off for good, but Dr. Tarnower advised adherents to go back to the original Scarsdale diet if they notice that their weight is starting to increase.

What Foods Can I Eat On The Scarsdale Diet?

Foods that you are allowed to consume on the Scarsdale diet include:

As long as you adhere to sticking under 1,000 calories, you can consume these foods while following the Scarsdale diet as well as the Keep Slim Program.

What Foods Are Not Allowed?

Foods that are forbidden on the Scarsdale diet include:

As you can see, the Scarsdale diet does have some severe restrictions on the types of food that can be consumed in the 14-day window of practicing the diet. These restrictions support the medical communities criticism of the effectiveness of the diet.

The Effectiveness of The Scarsdale Diet

Since the Scarsdale diet consists of following a diet high in protein with moderate amounts of fat and carbohydrates while severely limiting the number of calories you take in, you will most likely lose weight while following the Scarsdale diet since you are keeping your body in a caloric deficit [2].

Although the weight loss is fast and drastic, it may be short-lived. This is because it is recommended that men get 2,000-3,000 calories each day, and women get 1,600-2,400 calories additionally [4]. Cutting your calories by this much inevitably will allow you to shed some pounds initially.

Losing this type of weight in the two weeks that you practice the Scarsdale diet may give you signs of hope in achieving your weight loss goals. However, it’s been shown that severely restricting your calories as a long-term dieting approach is unsustainable and leads to weight gain once you come off of the dieting program [3].

Downsides of The Scarsdale Diet

The effectiveness of the Scarsdale diet is questionable at best. Some of the major downsides from following the diet include:

Even though the Scarsdale diet is only a 14-day dieting approach, the downsides clearly outweigh any of the short-term benefits that you may see from following this diet approach. The downsides of the Scarsdale diet can lead to chronic illness and risk factors including high blood pressure and increased heart rate [5].

What can you eat on the Scarsdale diet?

While the Scarsdale diet restricts the total amount of calories you can consume, it allows you to eat meat, fish, poultry, eggs, and cheese.

Can you lose weight on the Scarsdale diet?

Since the Scarsdale diet severely restricts the number of calories that you consume over a 14-day period, you will most likely see initial results of weight loss on this diet.

Is the Scarsdale diet healthy?

What snacks can you eat on the Scarsdale diet?

Snacks other than celery, carrots, and certain types of vegetable soup are not allowed on the Scarsdale diet.

The Scarsdale diet is a controversial diet that was popular in the late 1970s. While there is some research that points toward success in weight loss, this diet is a short-term approach to losing a drastic amount of weight. Once you’ve completed your 14 day Scarsdale diet, you are likely to go back to your old eating patterns and put this weight right back on.

Due to the severe calorie restrictions of the Scarsdale diet and lack of recent research supporting its claims, this diet is outdated and can lead to doing more damage to your health than providing the benefits that it claims.

As always, if you have any type of medical condition or are beginning any type of diet program, we recommend consulting with your doctor first.

Paleo vs. Keto: Which Diet Is Best?

To lose weight, you need to create a caloric deficit. Body fat is stored energy, and it’s only by consuming...

What Is Periodic Fasting? Periodic fasting, also known as whole-day fasting, is a diet that involves fasting food for an...

Scott Adkins is one of those rare action stars who actually knows how to fight - and has the body...