Chris Pratt Guardians of the Galaxy workout and complete diet 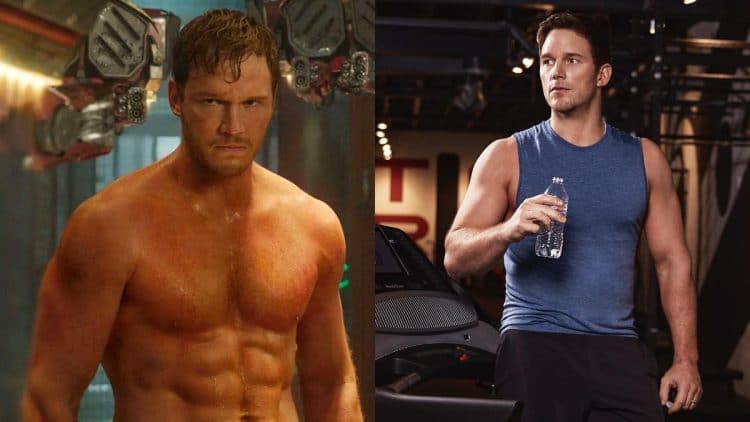 If you’d been told a dozen years ago that the chubby guy who played Andy Dwyer on Parks and Recreation would go onto star as the ripped and muscular Star Lord in Guardians of the Galaxy, you’d probably have been laughed off the couch. But, in one of Hollywood’s most inspiring body transformations, that’s precisely what Chris Pratt has managed to do.

Chris, your stereotypical endomorph, has used his transformation from blubbery to bulky to establish himself as a leading man, with movies like The Tomorrow War, Avengers; Infinity War, and Avengers; Endgame proving that his bankability is solid as a rock.

Fun Fact: On June 8th, 2019, Chris married Katherine Schwarzenegger, the eldest child of Arnold Schwarzenegger and Maria Shriver. With Arnold in his corner, it’s hardly surprising that Chris has managed to build a body worthy of respect – after all, he couldn’t risk being dismissed as a ‘girl-man’ by his own father-in-law!

Chris Pratt was discovered by actress Rae Dawn Chong (remember her from Commando?) while he was serving tables at the Bubba Gump Shrimp Company restaurant in Miami, Florida. Rae is also a director and she put her in her directorial debut Cursed Part 3.

From there Chris went on to appear in a succession of TV shows, starting with Everwood in 2002 and leading to Parks & Recreation 7 years later. The show was a hit and it led to Chris being cast as a baseball player in the movie Moneyball.

Chris was initially told that he was too fat for the part, having piled on 40 pounds during the Parks & Recreation run. He took on the challenge of getting in shape, working out religiously, and controlling his diet. In 3 months, he had lost 30 pounds and won the part.

In his next couple of movies (10 Years and Zero Dark Thirty) he piled back on the weight and then lost it again.

Chris’ breakthrough came in 2014 when he won the coveted part of Peter Quill / Star Lord in Guardians of the Galaxy.

In 2009, Chris married actress Anna Farris. Three years later they had a son named Jack. The couple divorced in 2017. The following year Chris began a relationship with Katherine Schwarzenegger and they were married the following year. Their first child, Lyla Maria, was born in August 2020.

So, what’s up next for Chris? He and Katherine announced that another baby was due in early 2022. He’s also got three new movies coming out in 2022 and early 2023 …

Trivia: Chris was a football player and wrestler in high school.

Chris Pratt grew up following a see food diet – when he saw it, he ate it. That’s how he got to be so porky by the time he scored the role of Andy Dwyer in Parks & Recreation. To get in shape for Guardians of the Galaxy he knew that he’d have to totally transform his mindset about eating.

Pratt’s entire eating regime was overhauled by nutritionist Phil Goglia. He increased Chris’ caloric intake to 4000 per day, which may seem a little surprising seeing the guy had quite a bit of weight to lose. Goglia knew, though, the grueling workout and the elimination of bad carbs would allow him to lose weight while the increased protein intake would go directly to adding muscle mass – which is exactly what happened!

Food for Chris no longer became a reward or a source of pleasure. Instead, he came to view it as fuel for his body. Every time he was about to eat, he asked himself one simple question …

If it wasn’t going to improve his body, he didn’t eat it – no matter how sweet and tempting it happened to be.

Chris went on a standard bodybuilding diet to lose the fat and replace it with solid muscle mass. Here’s an overview of his macronutrient intake …

Needless to say, Chris completely eliminated all of the junk food that had gotten him overweight. That meant no more dairy, fried foods, sugar-filled treats, refined carbs, hash browns, and burgers.

Goglia emphasized water intake, insisting that Chris drink a gallon per day. As well as sipping from a water bottle throughout the day, he’d also drink a full glass of water before every meal. It meant that Chris was constantly in the bathroom, but it also helped him to transform his physique.

Here is a sample day’s eating during Chris’ Guardians of the Galaxy transformation:

As we can see from the above, Goglia had Chris eating numerous times throughout the day. This made it easier for him to get his 4000 calories in, while also providing a consistent stream of amino acids to his muscle cells. Chris spaced his meals approximately three hours apart.

Chris is not a big supplement guy. He prefers to get the bulk of his nutrients from whole food, knowing that they are digested more efficiently in that form. In fact, his entire supplement regime can be summed up in four products:

As far as pre-workouts go, Chris looks for a product that includes the following key ingredients:

When it comes to a post-workout protein source, Chris uses a Whey Isolate that delivers around 30 grams of protein per serve.

The fat burner that helped to give Chris the extra edge included caffeine, green tea, capsaicin, garcinia cambogia, and bitter orange. His BCAAs were made up of the three amino acids in a 2:1:1 ratio of leucine, valine, and isoleucine, with each dose providing 8 grams of BCAAs.

Because Chris’ workouts typically lasted for more than an hour, Duffy had him drinking from an intra-workout solution every 15-20 minutes. This was made up of a blend of 30-50 grams of a carb powder that consisted of glucose and fructose in a 2:1 ratio (twice as much glucose as fructose).

The man who was put in charge of turning Chris Pratt from a tub of lard into a mountain of muscle was celebrity trainer and former Navy Seal, Duffy Gaver. Here are the principles that Duffy had Chris operate under …

To get in shape for Guardians of the Galaxy, Chris trained for five straight months. He put in 4 workouts per week, with three days

Chris would have minimal rest between sets, keeping it down to around 30 seconds. There would be no rest between exercises, with only the time taken to set up for the next exercise providing any respite to the intensity of the workout.

As you can see, this is a big workout. It would take Chris as much as an hour and a half to get through it. He needed to take an intra-workout with  a carb solution of 30-50 grams of glucose: fructose in a 2:1 ratio. This replenished his muscle glycogen levels, so he could finish with the same intensity that he started.

Active recovery involves doing some type of exercise that is different from what you are doing in your workout. Whereas Chris’ four gym workouts were all about lifting heavy weight, his active recovery training emphasized aerobic exercise.

As well as keeping the muscles moving to lessen the effect of delayed onset muscle soreness (DOMS), the active recovery day provided a mid-week mental refresher. Chris’s active recovery changed from week to week. One Wednesday he might spend an hour going one on one on the basketball court with a buddy, the next could take a two-hour bike ride.

Duffy made sure that whatever the exercises that Chris did on his active recovery days, they were low impact and not dangerous. The last thing they needed was for him to break a bone and put his entire training routine on hold for six months!

Training Note: With the superset move from one exercise to the next with no rest. With the One Arm Dumbbell Snatch, do all reps on the right side and then repeat on the left.

Even though there were no scheduled workouts on the weekends, that didn’t mean that Chris was sedentary for the whole 48 hours. He’s a guy who loves the outdoors and the weekends were when he indulged himself. Most Saturdays or Sundays would see him hiking in the woods, swimming at the beach, or kayaking down the rapids. He even managed to compete in a triathlon during his 5-month Guardians of the Galaxy prep period!

There is no doubt that Chris’ life-changing transformation happened in the 5 months after he landed the role of Star Lord in Guardians of the Galaxy. But that was nearly a decade ago. How consistent has his training been since then?

To be honest, it’s been a little bit up and down. But that appears to have been more to do with meeting the needs of his movie roles than a lack of discipline. As an example, he lost 16 pounds for his role in The Tomorrow War.

Overall, he’s been pretty consistent and his physique remains very different than it was in his Parks & Recreation Days. Again, the fact that he lives within the sphere of the greatest bodybuilder of all time, may have something to do with Chris maintaining his workout routine.

Chris Pratt is an excellent example of a guy who’s not naturally muscular or athletic getting in great shape. Chris is, in fact, your classic endomorph. Take a look at a shirtless pic of him prior to Guardians of the Galaxy and you’ll see that stereotypical pear-shaped body, with wide hips, narrow shoulders, and preponderance of stored fat around the middle.

Now take a look at Chris after his transformation. That same wide hip, narrow shoulder structure is there, but he maximized his potential within those limitations to create a physique that looks every part the superhero.

In the process of transforming his physique, Chris Pratt provides an excellent role model for the millions of average Joe’s out there who don’t have great genetics and who, like him, have to get to their physique goals through grit, determination, and good old fashioned hard work.