Arnold Schwarzenegger is "back"... in business after his recent heart operation. 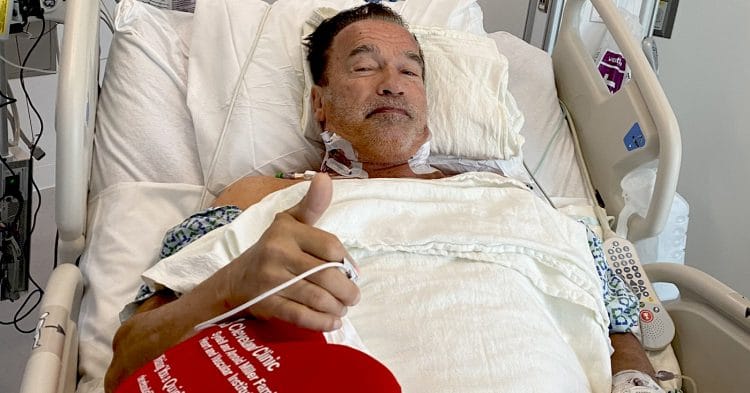 Bodybuilding legend and icon Arnold Schwarzenegger has had his fair share of hospital visits and procedures over the years related to injuries and his heart. Schwarzenegger was born with an abnormal aortic valve in his heart. For those unaware, this valve keeps the blood flowing in the proper direction. So in 1997, he underwent elective surgery to replace the valve with tissue from his pulmonic valve that was also replaced. Then in March 2018, he had emergency open-heart surgery to replace his replacement pulmonic valve.

Well, what was supposed to be a noninvasive procedure turned into a near-death situation for the movie star and former California Governor.

But thankfully, he was able to fully recover and has been going non-stop since whether he’s weight training, strolling through town on his bike, being an active member of the bodybuilding and fitness community, or acting as a safety advocate during the current health crisis.

But just recently, Schwarzenegger made another hospital visit; this time to get a new aortic valve to accompany the new pulmonary valve from his previous surgery of which he explained in a recent Instagram post.

“Thanks to the team at the Cleveland Clinic, I have a new aortic valve to go along with my new pulmonary valve from my last surgery. I feel fantastic and have already been walking the streets of Cleveland enjoying your amazing statues. Thank you to every doc and nurse on my team!“

Not surprisingly though, the 73-year-old bounced back quickly, and decided he was going to enjoy the various statues in Cleveland, Ohio; not far from where his massive event, the Arnold Classic, is held annually in Columbus.

Thanks to the team at the Cleveland Clinic, I have a new aortic valve to go along with my new pulmonary valve from my last surgery. I feel fantastic and have already been walking the streets of Cleveland enjoying your amazing statues. Thank you to every doc and nurse on my team!