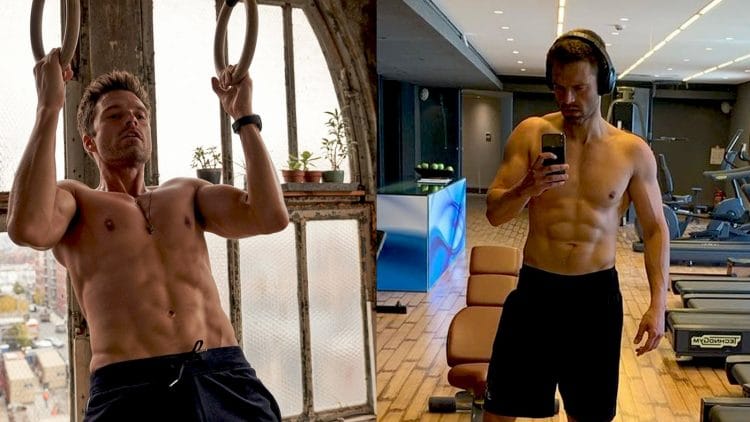 Sebastian Stan is one of the well-known actors in the Marvel Universe due to his role as the winter soldier. Even though he was introduced into the Marvel world a bit later than most of the other superstars, he quickly gained the recognition he well deserves.

Playing Bucky Barnes is not an easy job. Sebastian has to face villians that are twice as big as he is and this requires him to be strong and well built. To do so, Stan has to train extra hard and in this read we shall highlight the Sebastian Stan Winter Soldier diet and workout plan.

Sebastian Stan: The Man With A Bionic Arm

Sebastian Stan was born on August 13, 1982 in Constanta, Romania. In 1984, when he was just two years old, his parents got divorced. When he was eight years old, Stan and his mother moved to Vienna, Austria. They stayed in Vienna for 4 years and then moved to New York City. He attended Rockland Country Day School for his high school education and enrolled at Mason Gross School of Arts after graduating from high school.

Sebastian started acting when he was very young and starred in a number of school productions’. He was so passionate about acting that he spent a full year in England studying at the Shakespeare Globe Theatre located in London.

Stan’s acting career is quite impressive. Just like many Hollywood superstars, he had to take on so many roles before he finally got his big break-through.

Although he was already a big star, he hit the jackpot when he got the opportunity to work with Marvel Cinematic Universe. Most of us know him for his role as Bucky Barnes, the winter soldier, but this would have been different as first he was being considered for the role of Steve Rogers in Captain America: The First Avenger. It was in 2010 when Stan was cast as Bucky Barnes.

Half the battle to brawny biceps is won in the kitchen and this is something the Hollywood superstar knows very well. The Winter Soldier is very specific with his diet and only eats foods that are good for his overall health and beneficial for his bulking process.

Bucky’s diet consists of lean proteins, vegetables and healthy fats. Although most people usually avoid fats when they are bulking up, Stan understands that his intense workout routine requires a high intake of healthy fats as they help with muscle formation and recovery.

Sebastian’s diet requires him to eat around 5 to 8 meals every day. With that said, here is a sample of the Sebastian Stan Winter Soldier diet plan:

As you have seen, Sebastian Stan’s winter soldier diet plan is strict and mostly consists of lean proteins, vegetables and healthy fats. The diet also has some carbs to help provide him with energy as he takes on his intense workout routine.

Seb’s diet avoids processed foods, a lot of salt, and refined sugars. What is even more surprising is the fact that his diet plan does not allow ordering food or eating out, hence all his meals are homemade.

Although Sebastian’s diet plan might look super strict, just like most diet plans, it leaves some wiggle room for cheat days. The Hollywood superstar has one cheat day every week. Cheat days are important in a diet as they help you get out of the monotony of eating only specific foods, help curb cravings and also help to motivate the person to stick to their diet.

After the kitchen battle, the rest of the war is won in the gym. Sebastian’s herculean body is an envy to many. Being as well-built as he is does not come easy and that means he spends a lot of time in the gym. Stan’s workout routine was developed by Don Saladino, a well renowned fitness coach.

The Sebastian Stan Winter Soldier Workout regime is very physical and requires a lot of dedication. Although it is strenuous, it also has one other advantage apart from getting you close to looking like Bucky Barnes. That is the workout program involves a lot of bodyweight exercises and simple-equipment exercises. Bodyweight exercises are movements that use the weight of your body as the resistance.

Simple-equipment exercises are movements that use simple gym tools like dumbbells and kettlebells. This means that this training program is easily accessible to all kinds of people hence there is no reason you shouldn’t be as well built as Bucky by next summer.

With that out of the way, here is the Sebastian Stan Winter Soldier workout plan:

The Sebastian Stan Winter Soldier diet and workout plan has everything you need to get shredded. Although the diet plan is a bit restrictive, it advocates for healthy foods which are good for building muscles. As for the workout plan, the fact that it is so accessible means that anyone can try it.

This is the perfect opportunity to work on your summer body using the Sebastian Stan Winter Soldier workout program as a guide to create your own specific workout regime to help attain your goals.

Mike Rashid is a professional boxer, entrepreneur, fitness personality, and coach/trainer. This is his complete profile, biography, training regime, diet...

After winning the 2021 Arnold Classic and The New York Pro, Nick Walker has elevated his name in bodybuilding unlike...