Let’s compare how the two can help you achieve your gains!

The barbell and dumbbell curl are two variations which should be staples in your arm workout routine if aesthetic biceps are what you’re after (we’d hope so).

They each have their own benefits and drawbacks but that’s the beauty of having multiple options… you don’t have to choose just one (and you definitely shouldn’t).

But it is beneficial to know how each one can help you to maximize your bicep gains and so we decided to do a comprehensive comparison of the two. And we hope you can learn enough to utilize both training tools effectively

This bicep exercise variation is a bilateral (affecting both sides) movement and as a result, you can train using maximum loads since the weight lifted is equally distributed across both biceps (unlike the dumbbell variation which we’ll get to shortly).

And you also don’t need as much balance and stabilization to perform this variation. But another benefit is that you can increase the weight in 2.5 lb increments on each side which you cannot do with a fixed dumbbell.

And not too mention, training with a barbell is a must for strength athletes who compete, so functional carryover is imperative.

This dumbbell curl, on the other hand, is a unilateral (affecting one side) movement which requires more balance and stability to effectively execute since there’s less support from the opposite side.

But an awesome benefit of dumbbell training, in general, is that there are more exercise options overall due to the unrestricted range of movement. And… they’re generally pretty portable too.

So, now that you know the difference between the two, let’s talk about what the research says about the effectiveness of each variation.

Check out these 5 best ways to build better bicep peaks!

But the EZ bar curl was shown to have higher activation of the two muscles previously mentioned, out of the three exercises (only slightly more than the straight bar) because of the semi-prone wrist position.

And both the barbell curl and EZ bar were found to be superior to the dumbbell curl for activating these two muscles.

However, one Ace-sponsored study tested several exercises using 16 participants to find out which ones were the best for activating the biceps through EMG activity.

Well, what university researchers discovered was that the concentration curl was the superior movement, followed by the cable curl, chin-up… and then the barbell curl.

But the likely explanation for this is that the concentration curl is more likely to result in better isolation of the biceps without as much involvement from the front deltoids or any other muscles.

And the same study did find that anterior (front) deltoid involvement was higher in the barbell curl than the incline curl, chin-up, and concentration curl. But another possible reason for the higher EMG activity during the concentration could have likely been from mental concentration as well.

Now, a concentration curl and a standing/sitting dumbbell curl could be considered as not the same exercise.

But if comparing the bilateral movement of a barbell curl or any variation to a unilateral dumbbell curl variation, then this is very beneficial information for a comparison of the two.

Also, these studies have not included all possible training variables and the results are based on general, overall muscle activity, not necessarily taking into account the potential benefits of utilizing various angles and training methods.

So, based on these two studies and limited research which considers all factors, we’re convinced that doing a variety of bicep exercises is your best bet for not only achieving maximum muscle activation but for strength and function as well.

So, that brings us to how we can maximize our training by utilizing different tactics and techniques…

Get the best biceps contraction to stimulate more growth!

How To Maximize The Barbell and Dumbbell Curl For Optimal Gains

When it comes to maximizing the effectiveness of both the barbell and dumbbell curl variation/s, there are some things to avoid and some you want to make sure to include.

Now, because there are options for various wrist positions, angles, and hand placement; we need to cover this aspect of bicep training to ensure we achieve the best possible outcome.

But we do need to have some knowledge of the anatomy of the biceps and associated muscles as well; which will allow us to train according to how they are attached and how they function.

We probably don’t need to tell you where the bicep is located (on the front of the upper arms between the shoulder and forearm if you didn’t know) if you’ve ever taken a basic anatomy lesson.

But the primary function of the biceps brachii (scientific name) is to flex the elbow joint which also pulls the forearm upward and rotates it outward. And it has two heads (long/outer head and short/inner head) which perform the same function.

Now, underneath the bicep is the brachialis which primarily flexes the forearm at the elbow. This muscle gets worked during any variation of a bicep curl.

And the brachioradialis is a muscle located in the forearm which starts at the lateral supracondylar ridge of the humerus, travels up the forearm, and inserts into the distal radius at the radial styloid process.

Ok, let’s get back to discussing some of the various training variables which can affect muscle involvement during a curl variation…

Research shows that wrist position does in fact influence which muscles are primarily activated during a variation of a curl. 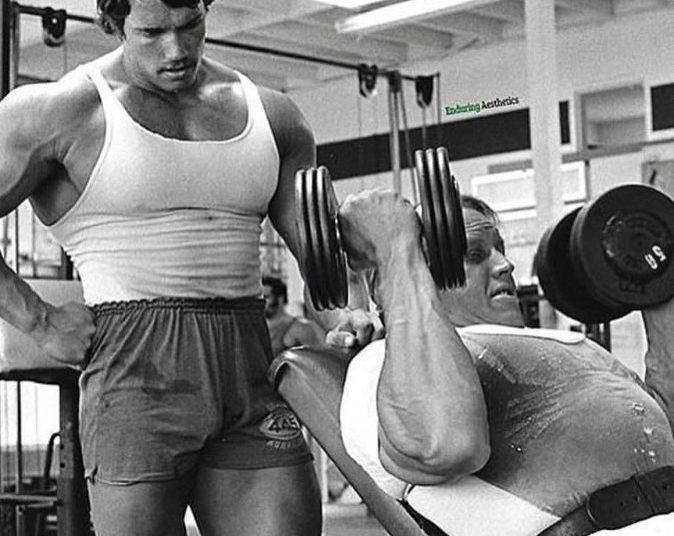 So, what this tells us is that if you want to maximally target the brachioradialis, then use a pronated hand position during any variation of a curl.

But outside of the pronated wrist position targeting the brachioradialis, you cannot isolate either head of the bicep. However, you can emphasize each head using varying hand positions.

So, it’s a good idea to use varying hand positions in order to squeeze out a little more stimulation, whereas using a neutral grip may not fully maximize each head.

And remember when we told you that the bicep is attached at the shoulder joint and joins near the elbow? Well, to maximally train the biceps at both ends, you have to use proper technique conducive to optimal stimulation.

Every bicep curl variation activates the bicep at the elbow joint but since the bicep crosses the shoulder joint, the slight elevation is necessary to maximally emphasize the fibers near the shoulder.

So, let’s talk about effective barbell and dumbbell curl variations and then we’ll give some beneficial exercise tips…

There are many variations of the barbell curl (although not quite as much as with the dumbbell curl) and that’s good news because, like any exercise, it can get monotonous.

So, options always keep your training fresh and exciting.

We’ve talked about the EZ bar curl and you definitely want it in your bicep workout routine. It alleviates a lot of wrist stress while showing high activation of the biceps and brachioradialis.

But the great thing is, you can train very heavy without having to worry about the pain.

This is pretty much the default barbell bicep curl. You can use massive loads to really overload the biceps and it’s a great overall movement. But if it bothers your wrists, refer to the EZ bar variation.

You can also do this one using a single grip which would be more of a unilateral movement like the dumbbell curl. But, we’re going to group it with the barbell exercises.

Cables are an amazing training tool due to the constant tension on the target muscle and freer range of movement. Plus, in the Ace study mentioned previously, it was right up there at the top for bicep activation. (4)

The preacher curl is great because prevents cheating and you can really isolate the bicep muscle. Plus, your upper arm is slightly elevated which involves more of the bicep near the shoulder joint.

So you definitely want to fit this movement somewhere in your regime.

Dumbbells are awesome due to the versatility so there’s no shortage of exercises. But we’ll list a few of the top ones…

Earlier we talked about how this exercise is superior to many other common variations. The key to doing it correctly though is to drop your elbow down so that your Tricep lies against your inner thigh.

This will prevent you from rocking back during the movement. And just focus on a strong mind/muscle connection for maximum benefit.

This variation is undoubtedly the standard for dumbbell bicep exercises. It’s an excellent movement that allows you to train using maximum loads and you really get the unilateral benefits where total body function is concerned.

Avoid cheating and using too much front deltoid and supinate at the top for maximum bicep contraction.

The seated incline curl is a great exercise that really stretches the biceps and it’s a very effective movement which elicits considerable neuromuscular effort when performed through a full range of motion. (5)

If you don’t have access to a standing preacher curl stand, then you can set up a bench to a high incline. And again, you’ll get a great stretch in the biceps and it’s a great variation for purely isolation.

You can really focus on each bicep which is beneficial for developing a mind/muscle connection.

These exercises are great for structuring your bicep routine around at first to keep things simple. They will improve your strength, build muscle, and help you to develop a good mind/muscle connection for a better contraction.

These tips are pretty much the same for both the barbell and dumbbell variations since a curl is a curl. But we’ll explain any differences which need to be acknowledged.

Make sure to warm up with a few lighter progressive sets before you attempt the working sets.

Up for an even more hardcore bicep challenge? Try These 7 exercises or do the full workout!

The barbell and bicep curl is the best free weight options that we have at our disposal for maximizing our fullest bicep potential.

These exercises will pack on the size and strength while offering so many variations and interesting ways to include them in your arm routine.

Both have advantages and drawbacks but so does everything in life. But weight training and fitness, in general, is really about using different tools to ultimately achieve one goal in the end.