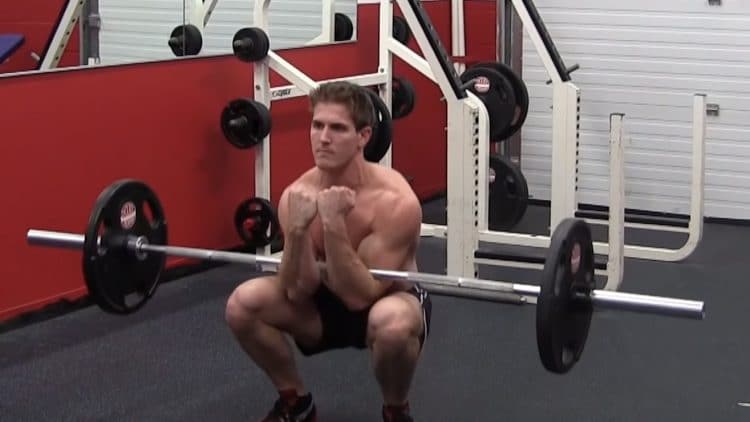 The Zercher Squat isn’t your typical full body exercise and it’s definitely unconventional in nature. But, it’s darn effective and the benefits are worth taking notice of.

Now, the movement itself resembles a front squat but the bar sits in your elbow crease rather than on your front deltoids. But, the Zercher targets arguably more muscle groups and utilizes more stabilizer muscles.

And you can do so many functional movements with The Zercher squat!

What is a Zercher Squat?

With a name like “Zercher,” you’d naturally want to know where the heck the name originated.

Well, supposedly, a St. Louis powerlifter named Ed Zercher did this movement in the 1930s when little equipment was available… and so he had to get creative!

Lifting the barbell with the crease of your elbow was an easy way to perform a movement, although likely a little painful and challenging. And that’s why you’ll rarely see anyone doing the Zercher squat.

The Zercher squat has an impressive resume of muscle and strength-building potential. The quads take the brunt of the weight load and the posterior chain (Backside of the body) is highly engaged during the movement.

But, since the weight is held in the crook of the elbow, the biceps get a heck of a workout too.

By having the barbell lower on the body, you reduce the spine load. Squat variations require you to place the barbell on the traps and/or shoulders and this clearly causes a larger degree of spine compression.

So, the Zercher squat is similar to the Sumo deadlift in that regard.

But, the Zercher setup also optimizes core engagement since the bar is mid-body level.

The Zercher squat is a good example of doing something difficult which yields great results.

Now, the mechanics favor quad development but it’s apparent the lower posterior-chain (Hamstrings and glutes)  muscles receives a lot of stimulation. And just by holding the barbell in your elbow crooks, you’re back is engaged while your traps will be on fire.

The core assists in maintaining an erect posture and the biceps are struggling to hold the barbell in place.

“By holding the barbell in the crooks of your elbows—like you do during the Zercher squat—you’ll engage your traps, abs, and biceps more than a standard back squat” said Men’s Health Fitness Director B.J. Gaddour.

So, the muscle-building benefits are an obvious side effect of the Zercher squat.

Any movement which requires progressive overload with more weight, reps, or sets will build strength.

Adding resistance to the Zercher squat is recommended is recommended as with any other exercise. But, you must do so safely to prevent injury since risks are present.

Increase the weight in small increments to progressively adapt to the movement with good form.

Since you front load the bar in the crook of your elbows, you must thrust your chest up to protect the back and improve your breathing during the movement. And the movement just won’t be as effective unless you’ve an upright posture.

It’s obvious that holding a loaded barbell in the crooks of your elbows would be painful. But, you can wrap a foam pad around the bar to ease the discomfort.

However, a heavy barbell is never going to feel comfortable on your elbow crease.

Traditional squats aren’t as difficult aside from issues which may arise from the lack of mobility.

And maintaining an upright posture is also easier with the regular squat.

The Zercher squat more closely resembles the deadlift and so keeping the back straight and arched is even more important.

Holding a heavy barbell in your arms is not easy. So, naturally, you won’t be able to use the same weight. And so, the Zercher squat requires light to moderate weight because of your positioning.

So, it’s a great exercise to have in your routine but the maximum mass-building potential is better left for the other squat variations.

How To Do The Zercher Squat

You can either load the barbell from the floor or from a rack. Now, as you are aware, the movement is performed by holding the bar with your elbow crooks. But… there is a harness you can purchase which holds the bar for you.

And it also positions the bar higher than the conventional Zercher squat. So, it’s a great option which will ease the difficulty of placing the barbell in your elbow creases.

Now, not everyone will be able to load the exercise from the floor. You need flexibility and mobility in the ankles to do it safely and effectively. So, choose to start from a rack if you cannot lift the bar from the ground.

And so, working on mobility training is ideal for being able to improve your Zercher squat performance.

Although the two may be similar, they aren’t at all the same thing.

And many could argue the Zercher squat places more load on the quads than the front squat. But, the front squat is an excellent exercise and a study showed it to be safer on the lower back and knees than the back squat. (1)

It’s also as effective for strengthening the knee extensors and muscle fiber recruitment, and so we’d assume the Zercher squat is similar in its mechanics. (1)

Zercher Squat vs. Back Squat

And that’s where the Zercher squat may come in handy. Having your arms in front of you makes it a more functional exercise and the range of movement is ideal here as well.

People with longer limbs may also like this variation as well since it decreases spine compression and may force you into a wider stance. A study showed the back squat to place a considerable load on the knee joints. (2)

And although it has its place, the Zercher squat would likely be a better and safer option in many instances. But, proper form is crucial.

Per the instructions provided, you can do the Zercher deadlift by loading the bar from the floor. But, again, you must have excellent mobility to pull it off.

The deadlift is known for working the posterior-chain, but it’s a movement in general, which maximally loads the quads the deeper you go. So, it’s always a good exercise for full development. (3)

The rack pull is a better alternative to the deadlift when mobility is an issue. You’ll simply set the safety bar at knee level and perform the movement as you would a deadlift.

Now, the difference here is that the rack pull does use a little more back since the bottom of the movement is shortened. But, it’s still a great Zercher variation.

Building static strength is a benefit of a Zercher hold/walk. Simply unrack or lift the bar and walk the desired distance. All of the muscles involved will be under a lot of stress but it’s a good conditioning movement.

The Zercher Squat is an Effective Full Body Movement

Yeah… the Zercher squat may not be the most conventional movement but that doesn’t decrease its effectiveness.

And it may not be the most comfortable either but it does have its benefits. The variations are all functional and the size and strength gains are a big plus. Now, does that mean they should substitute the front and back squat? Nope.

A Zercher squat is a tool like every other exercise each has its purpose. So, rotate it in your regime and just appreciate the additional gains you’ll be making!