Pro bodybuilder Seth Feroce discussed the use/abuse of steroids with Greg Doucette, "we just like to push the limit." 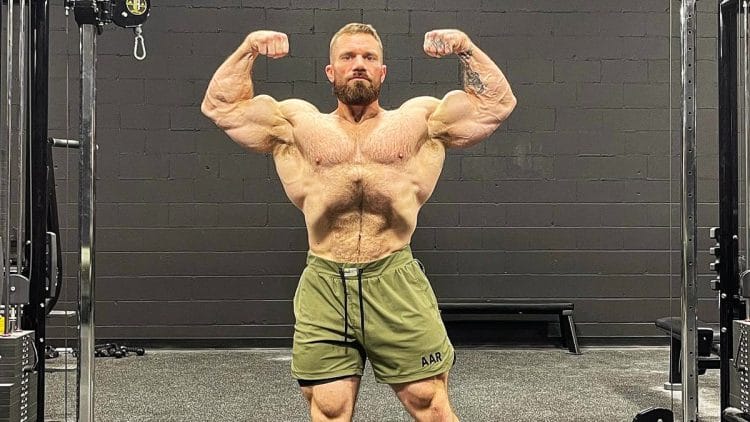 Recognized for his outspoken nature, IFBB Pro bodybuilder Seth Feroce has been in the headlines lately for discussing the dangers of steroids in the sport. In a recent YouTube interview with Greg Doucette, Feroce examined the ramifications of addiction as they relate to steroid abuse.

Seth Feroce competed as a Pro during the 2000s, where he made a name for himself quickly with shocking muscularity and conditioning. Feroce has been out of competition for more than a decade but does his best to keep up to date on important issues affecting the sport. He is vocal about the dangers behind steroid abuse and revealed last month his decision to cut out gear altogether.

A 212 Men’s bodybuilding and Classic Physique competitor, coach Greg Doucette has been around the block too. He competed at his first IFBB Pro show back in 2013. After competing at two shows in 2016, Doucette attempted one more event three years later. He made his debut as a Classic Physique competitor at the 2019 Niagara Falls Pro, where he placed fourth before stepping away from the sport. While building his YouTube channel, Doucette routinely discusses issues affecting the sport. One such issue on the docket is the use/abuse of steroids.

In a recent YouTube video, Doucette and Feroce spoke about the dangers of steroids, equating their use to drug addiction.

“I said that in a video about this possibly starting to potentially look like a little bit of an addiction problem. You love lifting weights. We all love lifting weights. We all chase the pump, or this something that is occurring, your bench is constantly going up. I was doing the 80-pound dumbbells for 12, now I’m doing them for 20. You’re like, ‘this shit works’, yes it does work.

According to Feroce, once someone starts abusing steroids, it’s hard to not enjoy the benefits they offer. In addition, Feroce highlights the dangers of psychological dependency.

“The crazy thing is, all of a sudden you fall in love even more so with a feeling a certain drug can give you because all these different steroids do all different things. That’s why I was attracted to them.

I was like, ‘I get to conduct my own science experiment on myself?’ This is the coolest thing in the world because you know, we are nerds to a certain degree. We are like the smartest dumb people on the planet. I’m like alright, let’s do this cycle. I was like man, that worked.

Feroce believes a mental connection, similar to addiction, surfaces when someone abuses steroids and works out.

“I became so attracted to that, like you said, when you go into the gym and all of a sudden, you’re constantly progressing. All the work you were doing as a natural bodybuilder or a gym rat or whatever, all those dreams that you had about getting a much fuller, rounder biceps, and capping your delts off, and having the traps into the capped delts, into the triceps, into the swooping chest.

All that shit starts to come true. So, for people not to think there’s a mental connection that’s almost uncontrollable, you’re out of your mind.” Seth Feroce told Greg Doucette.

Doucette emphasized how easy it is to become physically and psychologically addicted to steroids.

“It’s so easy to get addicted to it, the dopamine rush, when you start dieting down, and you see the new vein, the muscle, the striation, the increased bench, then all of a sudden I’m taking steroids. And this is going on 10 times faster than normal.

I trained as long as I could natural, so I milked the most out of it. Then I wasn’t making any improvements, and went on the gear, and it’s incredible but like anything, like drugs, when you’re drunk, however high you are, the high ends. After a while, that cycle… it comes to an end.” Greg told Feroce.

Greg and Feroce Identify the Differences Between Use/Abuse of Steroids

Doucette believes there is a fine line between the use and abuse of steroids. He clarified that abuse to him is ‘anything beyond or above what is prescribed by a doctor’.

“This comes up all the time. What’s the difference between abuse of gear and not abuse? And I’m going to do a ‘safe cycle’, but in my opinion there is no safe, there’s safer, there’s better but there’s no safe. But abuse to me, is anything beyond or above what is prescribed by a doctor. So, if you’re taking, oh, ‘I’m only on 300 migs of test’, well if the doctor prescribed you 100 migs, then that’s too much.

I just did a video yesterday, a guy was giving HRT 100 migs a week, 23-year-old, fine. Maybe he needed it, maybe he didn’t, but then he said ‘yeah I want to compete’. He did 400 migs a week. Ruined his body. He had cystic acne, bleeding on the bars, wearing three shirts, sticking to him at night, he’s in bed, the nightmare. The mental part of it, all horrible. 400 migs, most people would be like ‘that’s nothing, that’s safe’. It’s not. 100 migs was his dose, 101 migs is abuse.” Doucette explained.

Feroce maintains that a big part of why athletes get addicted to steroids is because of their desire to push the limits.

Despite a thriving business and a healthy family, Feroce admits that he still thinks about his own steroid insecurities. He added that his past cycles have altered his thinking to the point where he questioned if he was okay.

“My company is doing good. I got a beautiful family. If you don’t think at night time, that i don’t let the day run through my head and go through my own insecurities, you’re crazy. We all have them. When you take steroids, and you elevate your testosterone levels to wild numbers ,you’re going to have some shit going on in your head, that you’re like, ‘why was I thinking that, does everybody else think like that too?

It’s no surprise that Greg and Seth are deep diving into the controversial subject. The sport of bodybuilding has been in a state of mourning following a number of deaths. Former Mr. Olympia Shawn Rhoden died last year. George “Da Bull” Peterson died days before competing at 2021 Mr. Olympia, and most recently, the passing of the late Cedric McMillan has left the community concerned.

One of Feroce’s biggest takeaways from the concerning trend is that mental health is not ‘talked about enough’ in bodybuilding. Feroce and Doucette believe there is an incredibly fine line between use and abuse when it comes to steroids.