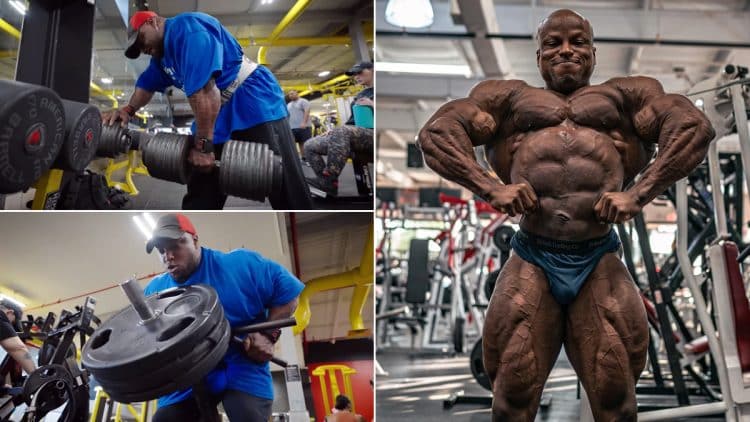 Bodybuilder Shaun Clarida kicked off his 2022 Olympia prep with a solid pull day workout. Clarida is one of the elite 212 division competitors and has won several professional bodybuilding competitions over the course of his career. Winning the Olympia 212 title in 2020 marked the pinnacle of his competitive achievements in the division. However, the 39-year-old later moved up to the Open Pro division and won his divisional debut at the 2021 Legion Sports Fest Pro.

Clarida starts his competition preparation about 20 weeks before Olympia. As a mark of the beginning of his prep, he recently uploaded a back and biceps workout to his YouTube channel. For those of you wondering about the difference in training and diet during off-season and prep for Shaun Clarida, the 39-year-old gave the answer at the beginning of the video. Clarida said:

“I keep my diet pretty much the same all year round. Only changes I make is I’ll start adding a little bit of cardio and being a little bit restrictive with my diet. Training is still the same.”

Assisted pull-ups on the machine

Shaun Clarida started the back workout with assisted pull-ups on the machine. Clarida believes that pull-ups are the ultimate exercise to achieve a wide back. Hence, almost all of his pull day / back workouts start with this movement. It might seem a little uncharacteristic for a professional bodybuilder to perform assisted pull-ups on a machine. However, Clarida chooses this method to take the momentum out of play.

After reaching a certain point in training, people tend to sway away from the correct technique and rely a lot more on things like momentum, overusing biceps or even kick with the legs to move upwards. All these things can potentially lead to diminished results. Therefore Clarida prefers to perform the pull-ups on the machine with a little assistance from weights.

“I’ve always known pull-ups but the one person that I talked to – who really stuck it into my brain that pull-ups in every back workout is important and is the key – was Iris Kyle,” Shaun Clarida said.

Clarida performed a few sets of pull-ups with a minimal 25lbs weight to assist and moved on to the next exercise.

Shaun Clarida next moved on to the classic T-bar rows to work the back further. After the initial warm-up set with one plate, the 39-year-old worked his way up to five plates in the working set. He maintained a ten to twelve reps range for all the sets of this movement.

In between the sets, Shaun Clarida explained the reasons why he does not change his training a lot throughout the year. Clarida said:

“Pulling heavy from start to finish is what maintains that muscle, gives you that full, dense and hard look all the way to the stage. So, that’s something I’ve always done. I’ve never cut my sets, my reps or poundages.”

Shaun Clarida next took to the movement that he watched bodybuilders like Dorian Yates, Flex Wheeler, and others perform while he was growing up – dumbbell rows. While explaining the reasons for putting an emphasis on free weights over machines, Shaun Clarida acknowledged the benefits of machines. However, he added that he uses machines towards the later stages of his prep – mainly to avoid injuries.

“I’m just starting prep. I’m still pretty strong. I’ve got a lot of food in me. I want to still kind of build muscle going into the prep. So I keep that weight heavy and stick to basic compound movements,” Shaun Clarida added.

After starting with slightly lighter dumbbells, Shaun Clarida performed the top set of dumbbell rows with 160lbs dumbbells and moved on to the next exercise.

A majority of movements in Shaun Clarida’s workout involve free weights that require core and lower back stability. As a result, he chose to opt for chest-supported machine rows in order to give his lower back some rest.

Clarida performed this exercise with an overhand grip to work the middle back, rhomboid, and the traps. After getting a few sets in, Shaun Clarida went back to working with free weights for the next movement.

Deadlifts might seem like a preferred option for an elite bodybuilder like Shaun Clarida. However, due to herniations in the lower back, Shaun Clarida no longer performs deadlifts directly from the floor.

“I hate to beat the dead horse. But again, there isn’t a wrong or right way to train. There aren’t ‘must-workout’ things you have to do like deadlifts… There are certain ways to train without causing further injury,” Shaun Clarida said.

However, it is still safe for the former Olympia 212 winner to perform rack pulls as the range of motion is significantly reduced which puts less strain on the lower back. Shaun Clarida performed the first set of rack pulls with a single plate and slowly worked his way up to five plates for the top set with a twelve to fifteen rep range. This movement served as the finisher as Clarida next moved on to do the biceps exercises.

Shaun Clarida’s current workout split consists of a push day, pull day, and legs day. Therefore he does not have a dedicated arms day in his routine.

“I don’t have a direct arm day during the grow season (off-season). I’m still going to keep the same routine. I’ll sprinkle a little bit of biceps (movements) on my back day. Once I hit about ten weeks out or so, that’s when I’ll bring an arm day back in directly…”

The biceps workout on this day consisted of a few simple movements. Shaun Clarida started the biceps workout with single-arm Dumbbell preacher curls with moderate weights and performed a few sets as he slowly increased the weight for subsequent sets. Seated EZ bar curls served as the finisher for the brief biceps workout.

While he has made a transition to the Open division, the 212 division is not a thing of the past for Shaun Clarida. The former divisional king wants to create history by competing in both the 212 and Open Pro divisions at the 2022 Olympia. However, he does not have a clear answer from the organizers regarding whether he will be allowed to do it.  Although there is ambiguity about Clarida’s divisional future, the soon-to-be-father has all the motivation in the world to start the prep.