1983 Mr. Olympia Bannout and John Hansen discuss Bertil Fox's career after the bodybuilder was released from prison for a double murder charge. 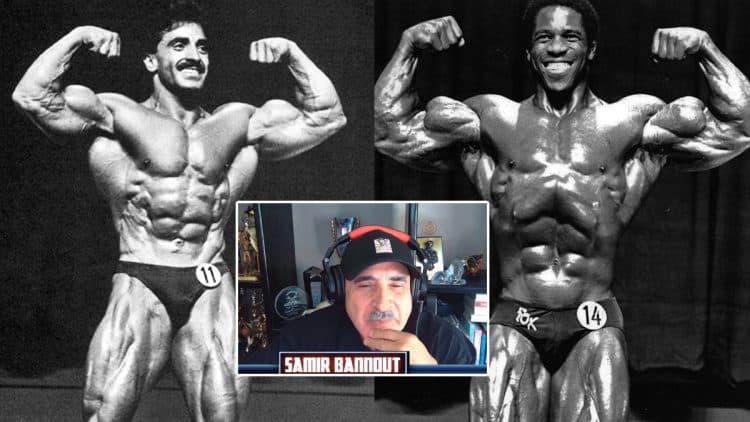 Bodybuilding veteran Samir Bannout reached the top of the sport at 1983 Mr. Olympia and remembered competing against Bertil Fox, who was released from prison last week for a double murder charge stemming from 1998. During a recent episode of the Muscle Maturity Podcast, John Hansen and Samir Bannout discussed Bertil Fox’s career and touched on the events leading to his arrest.

“Bertil Fox is an incredible bodybuilder and one of the strongest I have ever seen,” says Samir Bannout.

Bertil Fox was a Golden Era pro known for his incredible feats of strength. The bodybuilder sported muscle density rarely seen on competitors in the IFBB Pro League. Last week, Fox was released from prison following a 25-year sentence for the alleged murder of his fiancé and her mother. A gun was involved during the incident, but according to Bertil’s son, the firearm wasn’t his fathers.

Samir Bannout, a former Mr. Olympia who competed against Bertil, saw the intensity which Fox brought to each training session. Despite stepping away from the sport in retirement, Samir routinely shares his bodybuilding opinions on the Old School Labs YouTube channel.

Samir Bannout on Bertil Fox: “I Don’t Think He Had Obvious Weaknesses”

During the podcast, Samir and John Hansen reflected on Bertil Fox’s competitive nature and his impressive strength.

“I saw him the 1986 Olympia, I saw him there, but he wasn’t at his best I think. I never saw him when he was young in the 1970s.” John Hansen said. “When Weider first brought him over or when he was first in the IFBB, Weider featured him in Muscle and Fitness. They had pictures of him training with his shirt off and he was doing chest. His pecs were so thick. He was doing dips or something and his chest was out to here. It was crazy.”

After Hansen mentioned Joe Weider featured Bertil in the Muscle and Fitness magazine, Samir Bannout spoke on the bodybuilder’s potential when they were both competing.

“I know Bertil on a personal level. He trained around me and ate at my house on a regular basis. During the trip when he came out here, I know Bertil is an amazing and incredibly great bodybuilder. I think he’s the best to ever come out of England, only [Dorian] Yates squeezed by him.

If Bertil reached his full potential, he would have won the Olympia many times. Trust me on that. Before using, before Insulin, before GH, I saw this guy grabbing 200-pounds and doing flyes. The guy is beyond strong. His muscle density. Oh my God. I don’t think he had obvious weaknesses.” Samir Bannout said.

In 1983, the year Bannout won the Olympia title, he saw Bertil backstage and thought he was worthy of a top three placing.

“His side could be a tad bit better but if you look at his overall physique, I thought he was worthy of a top three at Olympia the year I won. I was there backstage. So, I know what Bertil Fox is capable of. You can never really knock him and talk bullshit about him.”

Bannout on Bertil Fox Double Murder: ‘He Didn’t Like His Wife Seeing Someone Else’

Bannout believes jealousy got the better of Bertil Fox and that he ‘couldn’t handle it’ when he found out about his partner’s infidelity.

“When I heard about the criminal act about him killing his ex-girlfriend/wife, he was in love with her. I think his weakness was he was very very jealous. Bannout shared. His girlfriend is already over and gone, they went their separate ways. If she saw someone else it’s understandable, but he was so in love with her, he couldn’t handle it.

Samir said that Bertil and his wife had been separated for quite some time before he committed the crime. Nevertheless, Bannout appreciated Bertil’s physique as a bodybuilder and believed he had an incredibly high ceiling in the sport.

RELATED: Samir Bannout on Kamal Elgargni and Steroids for Older Bodybuilders: ‘You Don’t Want to Push It at That Age’

Samir competed against Bertil Fox on the Olympia stage and saw him as an extremely talented Golden Era bodybuilder. After discussing his career with John Hansen, Bannout is adamant that Bertil could have won Olympia many times if he never found himself incarcerated.