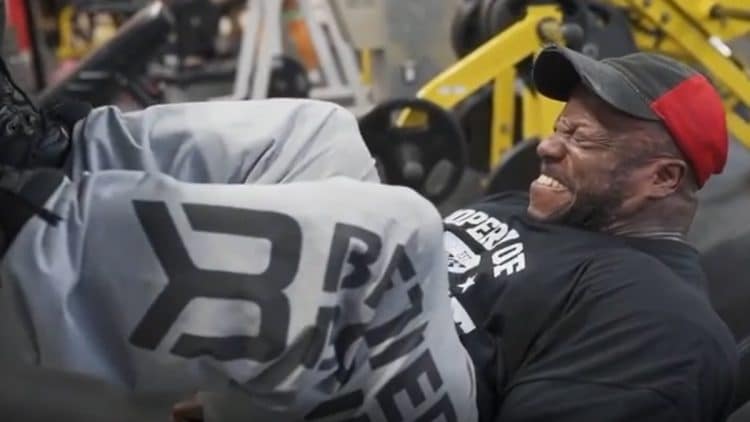 Shaun Clarida has demonstrated consistency throughout his bodybuilding career and is always up for a challenge. In a recent YouTube video, Clarida shared his Quad-focused leg day routine and was humbled by how difficult the training session was.

Shaun established himself as an elite competitor in the 212 division of bodybuilding. He became a 212 Olympia champion in 2020 but recently decided to transform his physique for a debut in Men’s Open. Before he decided to switch divisions, Shaun took his talents to 2021 Mr. Olympia in 212, landing in second behind champion Derek Lunsford.

Clarida has a lifetime invitation to compete at Mr. Olympia in the 212 division. He made his Men’s Open debut last year at the Legion Sports Fest Pro where he won first prize. The victory earned him an invitation to 2022 Mr. Olympia in Men’s Open. Olympia President Jake Wood made it clear that Shaun will have to pick one division to compete in when he makes his way to the biggest show of the year.

In a recent YouTube video, Shaun focuses on leg day with a series of workouts.

“Leg day. Everyone’s favorite day of the week. We got some new toys in the gym which you guys will see shortly. Pretty basic today. Again, today is my main quad focus day. So you’re going to see a lot of movements for quads, one or two for hamstrings. My second hamstring is later in the week as well. Leg day, not much to say, let’s get going.” Shaun Clarida said.

Clarida always likes to start the day with calves. His first set consisted of 10 reps, the second set for 10 reps, and the third set was 8 reps.

“Today is going to be a high-volume day here for legs. Meaning I’m going to do, instead of my basic two or three heavy sets, you know 8-12 (reps), I’m probably going to go for some intensifiers. Some drop sets today. Some cluster sets today, to kind of get more volume into the legs. I’ve been going really, heavy heavy for the 8-12 rep range, one to two sets. Now I’m going to take the sets up to three or four and get more volume and blood flow to the muscle.”

During the seated calf raises, Shaun is focusing on volume and sets of 10.

“Alright with these I’m shooting for 10 reps. First set did three plates for 10, felt pretty good. Second set went up to three and quarter got 10 there as well. Struggled a little bit which is good. Shoot for another 10 reps and that might be it. Again, more volume. Generally, I do one or two working sets, but today with these movements you’ll see me doing anywhere between three and four.”

Before moving to the next exercise, Shaun briefly stretches with standing calf stretches.

Shaun also likes to start off leg days using the hip abductor machine to loosen up the muscle tissue. In between each set, Clarida adds more weight. After the first set of 12 reps, Shaun adds extra weight with a gym pen and completes set two for 10 reps, and his third set with 12 reps.

Clarida utilizes the hamstring/leg curl machine next, with three sets, 10-11 reps each. He uses this workout as a warmup for the leg extension machine.

“Two warm up sets. One feeder and again, three to four sets anywhere from 8-12 reps.”

“Alright so before we move into any compounds like squats or presses, you got to warm your knees up. Going to get some extensions going here, get everything warmed up.”

“I only supposed to do like two or three sets and walk away. I keep increasing the pounds as I go along. This is only 200-lbs right here. I’m finishing 200. Try to get as many as I can hear and tackle on a few partials at the end. Remember when I mentioned earlier, intensifiers, just more ways to extend the set.”

Shaun mentioned that he gets more blood to the muscles with ‘intensifiers’ or cluster sets during his exercise routines.

Next is pendulum squats, which Clarida maintains as one of his favorite movements.

“This is one piece, if you’re a bodybuilding gym, you have to have. This is a great substitute for regular squats.”

“You guys know I’m a big Smith machine squatter. I still love them, but i feel like I can get way, way deeper, much better contraction and stretch on my quads with the pendulum. So now that we have it, I’ll be utilizing it a lot more.”

After Shaun’s first set of 8 reps, he wraps up his knees and admits his ‘range of motion was perfect’. Following the second set (7 reps) and third set (8 reps), Shaun tells his spotter ‘don’t touch it’ as he powers through his fourth and final set of 6 reps.

Clarida hits three sets on the machine lying leg press machine. His first set was for 10 reps, the second set was 8 reps and the third set was 10 reps.

Clarida finishes the exhausting workout routine with weighted lunges. His first set is for 18 reps/steps, the second set was 15 reps/steps, he adds more weight before completing his final set of 30 reps/steps.

“That was leg day. Absolutely annihilated my legs, quads, hamstrings, everything hurts. Got to test out the new pendulums here. As you can see, it humbled me today, but it felt damn good. Like I said I’m going to keep it in my regimen going forward.”

Shaun is continuing his off-season preparations with a chip on his shoulder. It is unclear which division Clarida will compete in at 2022 Mr. Olympia, but if his leg day is any indication, he will enter the show prepared.