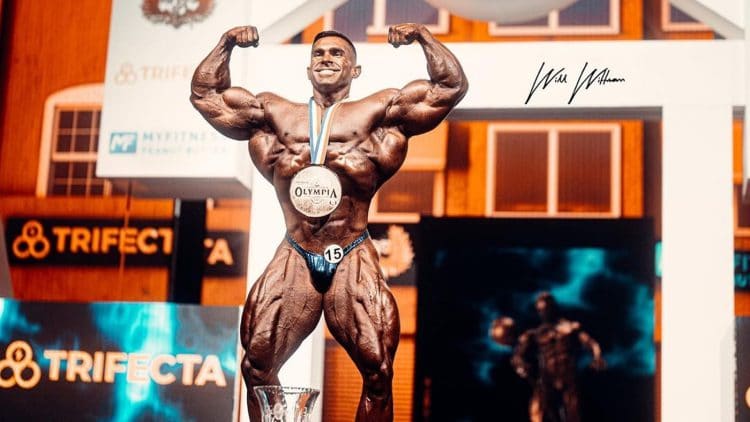 Derek Lunsford is the NEW 212 Olympia Champion. Lunsford was the dark horse going into the 2021 212 Olympia. From the moment Derek stepped on stage, we knew it was going to be very close.

Boy, oh boy. 212 Olympia 2021 showdown was nothing short of a high-stakes, high-intensity football match. It was El Clasico of bodybuilding – if you will. 2021 Olympia 212 contest had us on the edge of our seats until the very last second.

The underdog-turned-212 champion, Shaun Clarida, had a lot on the line.

Before the results were announced, everyone had the same question on their mind. Would Shaun be the next champ (after James “Flex” Lewis) to dominate the 212 division, or would he go the Kamal Elgargni way and be sidelined after winning his maiden 212 Olympia title?

The best thing about the 212 Olympia showdown is that results are announced the same day. You do not end up waking up at midnight contemplating who had the best physique on stage.

There is a con to the same-day results, though. Unlike Mr. Olympia open division, 212 athletes do not get an additional day to manipulate their carbs and water and dial in their physiques.

But none of this mattered to Derek Lunsford. He looked sharp and on the money from the moment he stepped on stage. But it was not a cakewalk either. Shaun Clarida gave him a tough fight for the top spot.

From the get-go, it was clear that Shaun, Kamal, and Derek Lunsford were the front runners for the 2021 212 Olympia throne. All of them were a part of the first and last callout in the pre-judging round.

Derek Lunsford looked bigger than both the other guys. Kamal had more definition in his back and abdomen. Shaun, on the other hand, had the best hams of them all.

Derek’s vacuum pose is a pleasure to watch. He is bringing the golden era aesthetics to the 212 division.

There was a long face-off between Shaun Clarida and Derek Lunsford in the final round. Derek was much dense, wide, and muscular than Shaun. His 212 Olympia 2021 win was much deserving.

Shaun had great muscle separation, definition, and conditioning. Shaun kills it with his favorite most muscular pose. His round and full delts and traps add a 3D look to his 5’3″ frame.

This was a shocker. After the second-place finish in 2020, he slipped to third place even though he showed up with a better physique this year.

Going by his muscle conditioning, shape and balance, it is hard to believe that he is 50-years-old. Kamal arguably brought his best package to the 212 Mr. Olympia 2021 stage.

During the Olympia 2021 presser, Kamal spoke about his muscle separation, lines, and muscle maturity due to his age. Turns out, he was not making that stuff up.

This was Angel’s first Olympia showdown. Frankly, the Spanish bodybuilder was not in peak conditioning for the show. According to the bodybuilding gurus, he was holding too much water and fat that hampered his conditioning.

Epler won two pro shows to qualify for 212 Olympia 2021. Nathan had good shape and structure and possesses immense potential. We would be looking out for him in the upcoming 212 showdowns.

Fitness Volt congratulates Derek Lunsford for his 212 Olympia 2021 win. It has been an incredible season for him, and we look forward to seeing him next year.

Do you agree with the 2021 Olympia 212 results? Who do you think should have won the title? Let us know by tagging us on social media and in the comments below.