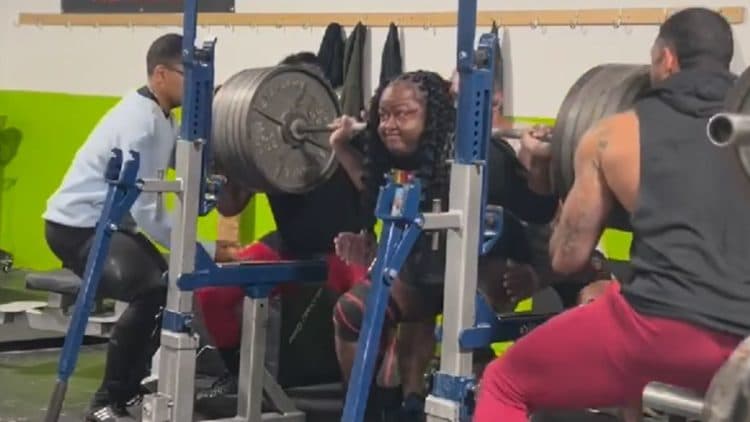 Sherine Marcelle is renowned for being one of the greatest female powerlifters, especially in the squat event. She has performed numerous mind-blowing lifts and feats of strength, including a 315-pound squat for 20 repetitions. However, it seems like Sherine is preparing something incredible, as her lifts from training are almost of world record proportions. On May 19, Sherine posted a 620-pound (281.2-kilogram) squat triple on Instagram. This is her new three-rep PR, but it is also 2.7 pounds (1.2 kilograms) heavier than Sherine’s competition PR.

Sherine Marcelle did not reveal her exact bodyweight at the time of the lift, but she competes in the 90-kilogram (198.4-pound) weight class. Her new squat triple PR was not raw, as she used knee wraps. However, she equally competes in both the raw and raw w/wraps divisions.

It is reasonable to assume that Sherine Marcelle is training to break the U90KG All-Time Squat W/Wraps World Record. She has already attempted to do so with a 644.9-pound (292.5-kilogram) at the 2022 WRPF Ghost Clash, but was ultimately unsuccessful. That being said, it is not clear when Sherine will compete again.

“First day back in wraps since The Ghost Clash. This is a great way to kick it off.”

As Sherine Marcelle is now able to do this weight for multiple repetitions, her competition PR is bound to be improved. She already holds the All-Time Second-Heaviest Squat With Wraps in the 90-kilogram weight class. And Sherine only needs to improve her competition PR by 22.8 pounds (10.4 kilograms) to claim the All-Time World Record. The current heaviest squat in Sherine’s division is 640 pounds (290.3 kilograms), which Crystal Tate set at the 2017 XPC Finals.

Although Sherine Marcelle’s squats with wraps are almost unparalleled, her raw power is also incredible. Sherine’s raw squat competition PR is 540.1 pounds (245 kilograms) and is the Third-Heaviest in the 90-kilogram weight class. It is clear that Sherine Marcelle is very successful, but she has been progressively better since starting the sport in 2016. Since then, she has taken part in 12 sanctioned competitions, and won nine of them.

For the past four years, Sherine Marcelle has not competed that much, but she’s been doing two meets each year consistently for some time now. She has already competed at the 2022 WRPF Ghost Clash this year, so we can expect to see her step onto the platform at least once more. Additionally, she is getting close to breaking the World Records and will be pushing hard to do so sooner rather than later.