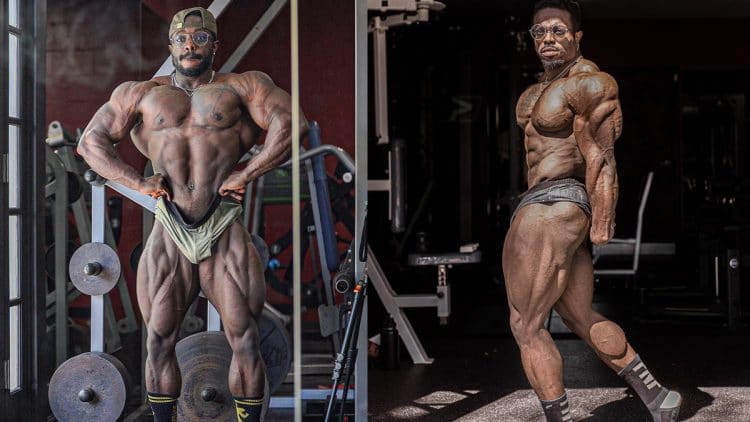 IFBB Classic Physique competitor Terrence Ruffin is fresh off his second straight win at the prestigious Arnold Classic USA competition that went down from March 3-6, 2022 in Columbus, Ohio. “Ruff Diesel” has officially begun his prep for the 2022 Olympia in December where he’ll look to beat out an elite roster of athletes including three-time and reigning champ Chris Bumstead, who he was runner-up to in 2020 and 2021.

On April 19, 2022, Ruffin uploaded a push day update for his 50k YouTube subscribers, where his coach Joe Bennett, aka “Hypertrophy Coach” discussed changes to the elite competitor’s routine.

They set up in front of what appeared to be a laundry area of a house and Bennett took it from there. Bennett explained that this is the first time Ruffin’s physique is balanced from top to bottom. So now the focus is on getting bigger overall and adding ten pounds of muscle to his already massive frame.

Albeit, Bennett did mention wanting to put more size on Ruffin’s arms to possibly even make them a standout body part.

“Because of how big Terrence’s torso muscles, his legs are, his arms are never going to be too big, so we can still just kind of chase those freaky arms.”

Bennett also plans to ramp up leg training for Ruffin which he appeared to get a little too excited about.

While the video showed clips of Terrence Ruffin performing a push workout, Bennett wanted to discuss and make some changes to Ruff Diesel’s push day routine and explained that they’d fine-tune it over the next week or two.

The first exercise shown in the video was the high incline machine chest press. Coach Bennett is not as picky when it comes to prescribing a chest press movement as he feels most variations are similarly effective. Bennett explained that he’d need to be more selective about choosing a good pulldown exercise, for example.

“A lot of different movements work for chest press movements.”

Bennett gave Ruffin the option to keep or rotate out the incline smith press with another exercise. They agreed to stick with the smith press and maybe rotate it with the Prime chest press machine.

Related: Terrence Ruffin Understands Risks of Bodybuilding, Plans to Retire in Next 3 Years

Ruffin and coach Bennett also decided to change the order in which the exercises are performed on push day. So instead of chest, delts, then triceps, Bennett wanted to flip flop the last two muscle groups and prioritize triceps, as they both feel Ruffin’s shoulders are big enough.

Bennett feels it best to take out dips to keep the volume lower at least in the beginning, and possibly add in a compound exercise later on depending how things are looking.

Then when it came time to decide on a fly movement, Ruffin expressed his preference for the pec deck chest fly. Bennett also discussed a few more changes that he’d like to include such as extra volume for smaller muscle groups, and direct forearm work (wrist curls and extensions) on arm days and pull days. Ruff Diesel has ten pounds to work with so they want to add muscle in all the right places.

The video wrapped up with some calf training and posing.

Terrence “Ruff Diesel” Ruffin is leaving nothing to chance during his prep for the 2022 Olympia taking place in Las Vegas, Nevada, from December 16-18. Ruffin and his coach Joe Bennett are devising a winning game plan for the world’s biggest bodybuilding show and seeing as the two-time Arnold Classic champion plans to retire from the sport in the next three years, time is of the essence.