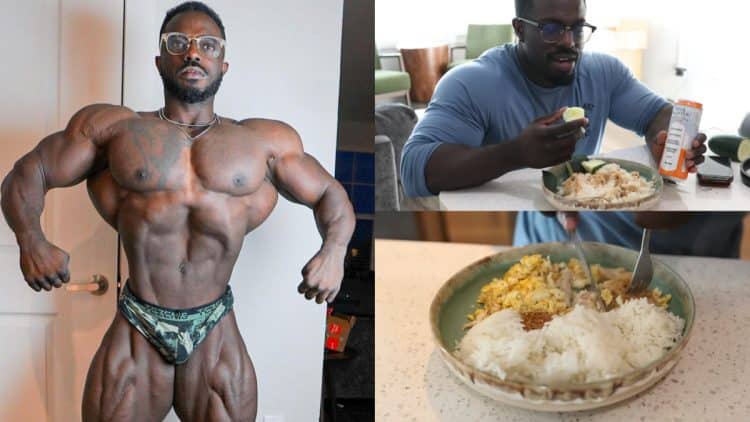 IFBB Pro bodybuilder Terrence Ruffin is gearing up for the upcoming 2022 Olympia, scheduled for Dec. 15-18 at Planet Hollywood Resort & Casino in Las Vegas, Nevada. In a recent video posted to his YouTube, Ruffin shared his full day of eating while in prep for the biggest show in bodybuilding.

Ruffin first gained attention for his insane conditioning and muscle separation in the IFBB Pro League as a Classic Physique standout. He brought a stellar package at the 2020 Arnold Classic and was runner-up to champion Alex Cambronero. Ruffin would place second again just a few months later at the 2020 Olympia.

‘Ruff Diesel’ exacted his revenge by defeating former champion Cambroner to win his maiden Arnold Classic trophy in 2021. He established himself as one of the most consistent performers in the category with another runner-up finish at the 2021 Olympia.

The biggest obstacle in Ruffin’s way at Olympia this year is the reigning three-time Classic Physique O champion, Chris Bumstead. After winning his first Classic Physique Olympia title in 2019, Bumstead has managed to retain the title since, and will look to create history by getting his fourth Olympia win next month.

Ruffin is determined to dethrone Bumstead at the 2022 Olympia. He successfully defended his throne at the 2022 Arnold Classic in March and will enter the contest with legitimate momentum.

Terrence Ruffin shares near-3,000-calorie diet while in prep for the 2022 Olympia

In a recent video posted on his YouTube channel, Terrence Ruffin shared his full day of eating while in preparation for the nearing 2022 Olympia.

Terrence Ruffin also showed off his impeccable posing routine in the video.

In August, Ruffin opened up about his timeline for retirement. While he said he’ll return next year, Ruffin added that he might step away after winning his third Arnold title.

‘Ruff Diesel’ previously gave fans a sneak peek at the massive 4,800-calorie diet he utilized to pack on the pounds in the off-season. He has cut down on his caloric intake by about 2,000 calories and will tweak his water and macronutrient intake further as the contest gets closer.