Winklaar underwent surgery on his left shoulder, which he says will factor into whether he makes a comeback. 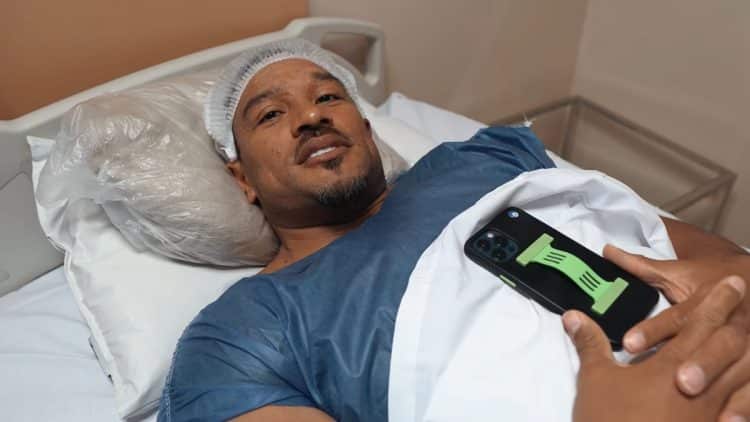 For the past few months, bodybuilding fans have wondered about Roelly Winklaar’s retirement status after noticeably downsizing. Recently, Winklaar underwent left shoulder surgery and said his bodybuilding comeback will depend on his recovery.

Winklaar, a Curaçaoan/ Dutch mass monster, turned heads the moment he started competing in the IFBB. His full chest, huge arms, and 3D musculature made him stand out even on some of the sport’s most competitive stages. Roelly was revered for his activity levels and made a career out of competing often. In fact, Roelly took his talents to the Mr. Olympia event a total of ten times.

In addition to a number of Pro show victories, his best Mr. Olympia performance came in 2018. He pushed seven-time winner Phil Heath and the late Shawn Rhoden on his way to finishing third. His bronze performance also earned him the first-ever People’s Champ award.

Roelly Winklaar last competed at the 2021 Romania Pro, a competition that saw him place ninth. Over time, he’s made no mention one way or another about retirement. However, speculations about him stepping away from the sport grew in Feb. after the bodybuilder showed off a massively downsized physique.

More questions loomed about where his career stood in August when he was spotted training/helping William Bonac for his latest Olympia prep. Now, Winklaar is directly addressing these concerns in his latest YouTube video.

According to Winklaar, his recent weight loss came as a result of not being able to train properly.

Exactly last year, I had to completely stop [training] because of too much pain. I find somebody that can fix it for me in Brazil. I want to thank Arrieta for that and the doctor too who brought me to those solutions,” Roelly Winklaar said.

He added that his chances of coming back to compete will depend on the success of his latest five-hour surgery.

“Everybody asking me why I lost weight, what’s happened, when will I compete again, when will I train again — it’s not allowed. I have too much pain. We will see if it will be better or not.”

“I [went] to the surgery. I waited for the doctor. I’m very healthy but my shoulders don’t work with me. That’s why I needed the surgery. It’s the left shoulder and we’re going to do it [heal successfully]. I’m going to be fine again.”

After the lengthy operation, Winklaar checked in to give fans a health update:

“The surgery [went] perfect. Surgery is done. It was a long surgery, like five hours. To find things that no one was accepting to be there. I want to thank the doctor who helped me out with this. Let me see where it ends,” Roelly Winklaar said.

“I’m done and I go home. It was successful because I don’t have the pain that I had before. I feel great. Just gonna say to the doctor [again] thanks.”

Despite his struggles to train, Winklaar continues to shape up-and-coming talent in the Men’s Open division. His last collaboration saw him pump iron in the company of rising star Andrew Jacked. They pushed each other through a high-volume leg workout. Again, the workout prompted more questions about whether ‘The Beast’ will one day return to his old stomping grounds.

Below you can find a full list of Mr. Olympia finishes by Roelly Winklaar

Having competed against names like Phil Heath and Kai Greene, fans would love nothing more than to see Roelly Winklaar back on stage. In the coming months, Winklaar will assess his comeback chances while healing from the extensive shoulder surgery.