Thor Bjornsson And Martins Licis Have EPIC Training Session Together 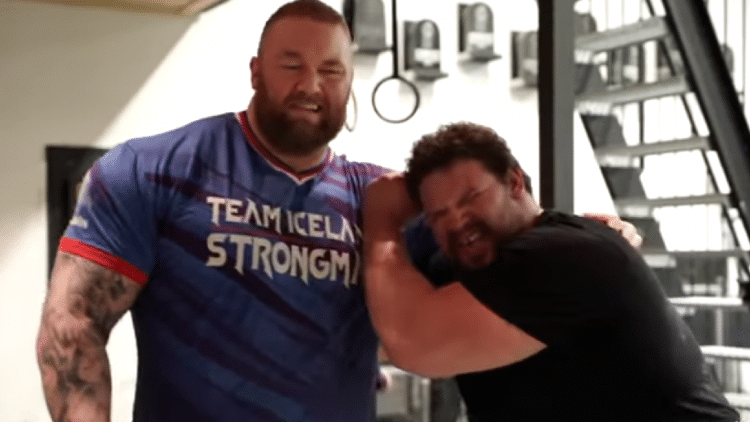 In more ways than one, Thor Bjornsson is truly a mountain of a man. Now a recent video shows him getting some hard work during a gym session with World’s Strongest Man Martins Licis.

Bjornsson is one of the best and most famous strongman competitors in the world. He has had roles on HBO’s Game of Thrones, as well as winning the World’s Strongest Man contest. As a result, he has become one of the most recognizable faces in the sport.

Another person who has begun to gain a more mainstream popularity is Martins Licis. Similar to Bjornsson, he is also a winner of the World’s Strongest Man, taking the throne in last year’s contest. Subsequently, he has become more recognizable to people who are not as familiar with the sport, despite the fact that he was fairly well established to those in the know.

Nevertheless, it was quite the sight to behold when Thor Bjornsson and Martins Licis decided to train together. A video to Thor’s YouTube shows this epic collision of muscle, as the two hit various exercises. On top of that, the Mountain managed to set some new personal records for himself in the process.

To warm up, Bjornsson and Licis start off with kettlebell sandbag throws. They start off with 30kg (66.1lb), which both men hit easily. Then, Martins can be seen shaking his head in disbelief, as Hafthor explains that he is going to attempt to reach a new personal best by throwing a 43kg (94.7lb) bag up. However, after a failed first attempt, he manages to heave it up, and over the balcony in the facility.

Then the two men move to squats, which they do on a new machine Bjornsson had custom made for himself. Here Thor starts off relatively lightly, with 118.2kg (415lb), before moving to 229kg (504.8lb) for two reps then three reps. On the other hand, Licis is not seen doing squats here.

However, both Bjornsson and Licis take part in the final exercise: yoke pushes. Initially, they start with just some light pushing, but the competitors that they are, Thor wanted to make it a contest. Whoever could push farther in one minute would win. After an intense battle of rock paper scissors, it was determined Thor would go first, managing to go the length of his training area about two and a half times. Unfortunately, this would not be enough, as Licis was able to barely surpass him.

This was quite the intense training session between Thor Bjornsson and Martins Licis. It is great to see two of the best strongman competitors in the world working to help each other get better.