This lift is currently an Unofficial World Record, but Danial Zamani has promised to attempt it in competition. 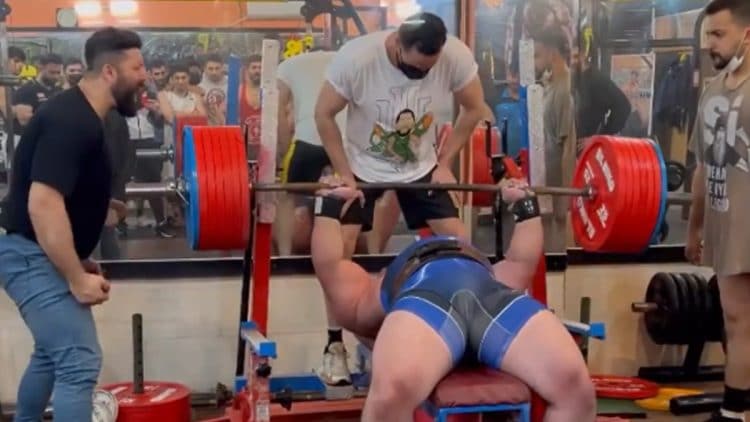 Iranian powerlifter Danial Zamani has just done what he promised a long time ago, and proved that persistence leads to some glorious moments. After unofficially breaking the world record in training, Danial Zamani has further improved, and just became the first person to bench press 800 lbs raw. On February 21st, 2022, Danial shared the video on his Instagram account. This day is definitely historic and will be mentioned many times in the future.

Danial Zamani bench pressed 365 kg (804.7 lbs), using only wrist wraps and a lifting belt, making this lift raw. Once again, Danial did not seem to struggle at all. He looked extremely comfortable under the bar, and did the lift with ridiculous speed, which was beyond impressive. Danial was surrounded by three spotters and quite a few people who were able to watch the lift live.

Danial does not want people to undermine his lift, so he promised to attempt it at an actual competition and make the lift official. He also wants other powerful athletes to be there to prove it even more.

“In close future I am willing to attempt 800 lbs in an official world class competition. I request from all the organizers to bring the opportunity to me with respect to the breaking world record in history consideration, to provide a world class platform inviting the best athletes in the world to prove my number.”

With this lift, Danial destroyed the current official World Record of 355 kg (782.6 lbs). It was set by Julius Maddox at the Hybrid Showdown III on February 20th, 2021.

Julius Maddox has also previously attempted the 800 lbs Bench Press two times, but both were unsuccessful. The first attempt failed because of a weight misload, and the second one, Julius just didn’t have the power to execute the lift.

When Could Danial Zamani Make The Record Official?

As Danial Zamani said, he wants a legitimate competition, and organizers who will respect all the work he has put in throughout his lifetime. However, a 365 kg (804.7 lbs) bench is MASSIVE, and doing it again will also be a challenge.

Two weeks ago, Danial posted an Unofficial World Record Bench Press of 360 kg (793 lbs) on his Instagram. In the comments of that video, C.T. Fletcher made a proposal to enable Danial to break the world record and compete against Julius Maddox.

“THATS POWER!! INCREDIBLY STRONG! STILL WOULD LOVE TO GET YOU OVER HERE TO GO HEAD TO HEAD WITH JULIUS AT IRON WARS IN MAY, TO SETTLE WHO IS THE BENCH KING!!!!”

Zamani and Maddox were already supposed to go head-to-head at the C.T. Fetcher’s Iron Wars V. It was reported that both athletes accepted the offer, but the competition was canceled for unknown reasons.

The 365 kg (800 lbs) bench press meant a lot to Danial Zamani, which can be seen in the video. Danial completed another milestone and pushed the boundaries of what was humanly possible. In addition, this was thought to be impossible for a very long time, so for him to do it is actually incredible.