A woman went viral on TikTok after posting a video where it looked like she was training with no pants on. 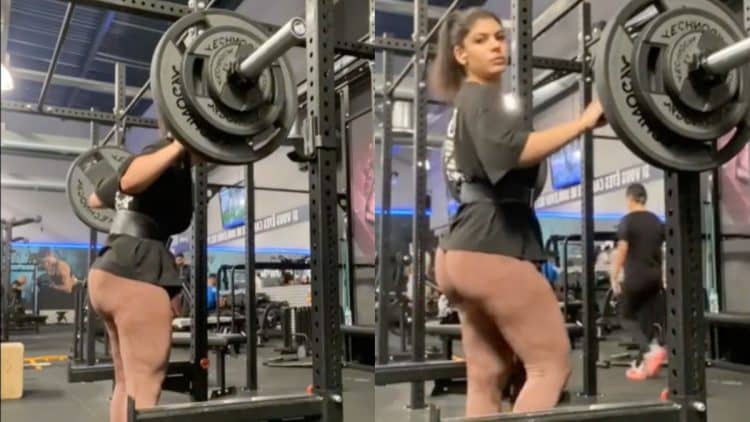 TikTok seems to be the new launching pad for those who are focused on finding fame, and fitness influencers are no exception. In a recent post made on TikTok, user _toupoouu1 shared a clip of her performing squats while donning ‘nude’ leggings that made it look like she wasn’t wearing pants.

Social media giant TikTok has become the place for budding influencers to find their following. There have been many fitness-related videos that have gone viral. In May, a female gym goer took to the platform to mock other people training at the same gym. The Kentucky native recorded others around her without their consent and taunted them as they worked out.

In another more serious case, another female TikToker had her gym membership revoked by a staff member, whom she labeled a ‘pervert’ for allegedly staring at her. Ultimately, she got charged by police with trespassing after her false claims.

While some may be amused by the current hostility present at gyms, fitness advocate Joey Swoll has made a name for himself by pushing back on the ‘toxic gym culture‘ that gets promoted on the platform. He argued against recording anyone without their permission and encouraged the other hostile lady to think about the consequences of her actions in the future.

In a recent clip uploaded on TikTok, user _toupoouu1 can be seen performing squats in the squat rack while wearing skin-color ‘nude’ gym leggings that made it seem like she was partially naked.

Reactions from people came flooding in online after watching the video, which has since garnered over 16 million views so far.

“I still don’t think it’s pants,” one user wrote in the comments.

“I said ‘oh she’s CONFIDENT confident,’” another chimed in.

“Something doesn’t seem right,” wrote another.

“I GASPED,” exclaimed someone else.

“WHY WOULD YOU CHOSE THAT COLOR,” criticized another user.

“Girl. Get another color of tights,” advised someone else.

“I thought she had no pants on,” a user wrote.

“I was shocked!” said another.

“Oh my god you scared me,” reacted a poster.

In another post, the woman clarified that she loves wearing nude leggings.

“I love nude colors, brown, you’ll have to get used to it bro so look [at] the squat.”

Sometimes, TikTok interactions end up being positive. In July, a female fitness influencer made headlines for her insane deadlift strength. Alice Elizabeth performed a massive lift of 264.5 pounds (120 kilograms) for six reps, leaving nearby male onlookers stunned at the strength they witnessed.

In another hilarious story, Montreal college student Zach Charlesworth surprisingly found himself competing at a bodybuilding show after being told that he would be swimming with his friends. To Charlesworth’s credit, he didn’t back down and competed against the professional bodybuilders despite a less-than-stage-ready physique.

The TikTok platform continues to grow with the fitness sector following suit. Despite the funny interactions, it appears ‘nude’ tone leggings are here to stay, judging by the TikToker’s recent comments.