As part of his offseason training, Stoltman shared a high-rep shoulder workout. 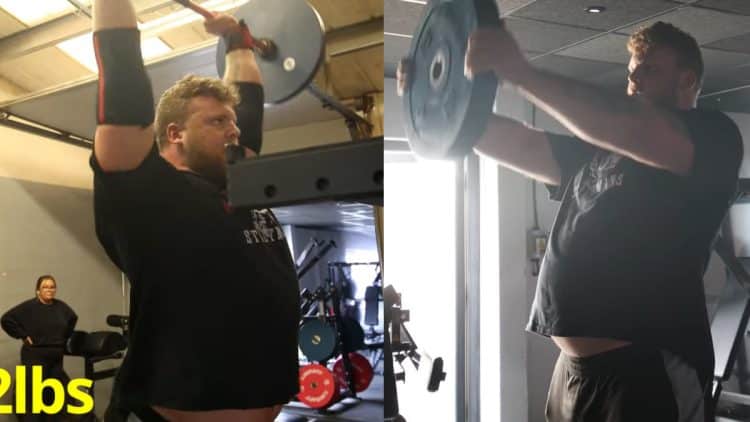 Tom Stoltman has had incredibly busy 2021 and 2022 seasons behind him, during which he claimed and then defended the title of World’s Strongest Man. After recently revealing that he won’t compete at the 2022 Rogue Invitational, Tom took time to reflect and regain his equilibrium. Since Tom is considered one of the world’s top athletes, he is unable to stop training entirely. Instead, his offseason consists of “lighter” workouts that the normal human still considers very difficult.

While keeping his strength level up, it is also important for Tom Stoltman to keep his size. Consequently, the exercise sessions he performs are an ideal combination of both. Luckily, Tom is open about his regime, so his workouts serve as a way to help others in achieving their goals. On September 12th, 2022, Stoltman Brothers’ YouTube channel shared a shoulder workout designed to increase hypertrophy in the shoulders. Take a look:

Tom Stoltman usually trains with his older brother, Luke, who’s notorious for winning the 2021 Europe’s Strongest Man. However, Luke was attending a wedding in a different town. So, Tom performed the workout alone and documented it brilliantly.

The first exercise of Tom Stoltman’s workout was the standing overhead press. This is the go-to exercise for many people, but Tom gave some safety tips. He advised people to wear knee sleeves and wrist wraps, because the position puts a lot of pressure on the joints. Tom also does not like to stretch out his muscles too much prior to training with heavier weights.

“I think what we are doing in the off-season is so much harder as well, we do a lot of rep stuff. I keep a lot of volume when I am doing pressing, because that is how I keep strength and build muscle.”

Tom Stoltman then loaded the chest press machine and performed three sets of eight repetitions. It is not clear what the exact weight was, but it was clear by the facial expressions that it was relatively heavy for him.

As part of his shoulder work, Stoltman strengthened his rotator cuff. The next exercise for Tom Stoltman was a combination of the upright dumbbell row and a standing dumbbell press. After he was finished with this, Tom moved on to three sets of 15 reps on the front plate raise. His final shoulder exercises were banded face pulls. To spice things up, Tom added a few triceps extensions.

“Obviously I am not conditioned to compete, but I am getting more conditioned with my shoulders and stuff. It’s a lot of high-rep stuff, a lot of lactic acid build-up.”

Tom Stoltman has some big plans for the future, with the first one being the 2023 World’s Strongest Man. Following that, it is very likely that he will move onto the 505-kilogram (1,113.3-pound) deadlift challenge. However, as far as this year goes, Tom will not take part in anything too serious.