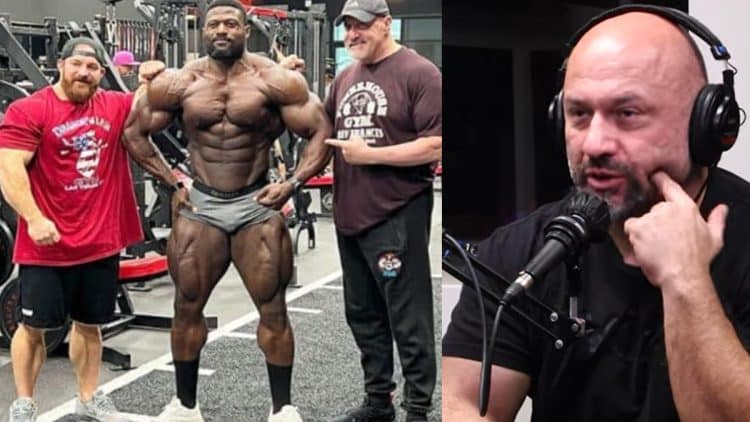 With the 2022 season of bodybuilding underway, coach Hany Rambod is sharing his thoughts on an upcoming contest involving one of the hottest rookies of the year, Andrew Jacked. In a recent video, Rambod confirmed Jacked will compete at the 2022 Arnold UK contest and gave his thoughts on who will be his biggest threats at the upcoming show.

Rambod is widely respected for his intense yet methodical training methods. He has trained a slew of top-tier athletes, like seven-time Mr. Olympia Phil Heath, and bodybuilding legend Jay Cutler. Rambod also coaches a number of active competitors, some of which include reigning 212 Olympia champion Derek Lunsford and Hadi Choopan.

This year’s bodybuilding season saw Andrew Jacked emerge as a serious threat in the Open class. He earned his Pro card back in March at the 2022 Amateur Arnold Classic contest. From there, he continued training with Flex Wheeler and took his talents to the Texas Pro. He won the contest with an aesthetic package, and defeated runner-up Martin Fitzwater.

A few weeks ago, Andrew Jacked revealed that his original plan of competing at the 2022 Arnold UK contest was in jeopardy due to Visa issues. After hearing of the news, Fitzwater suggested he was ‘bi**ng out’ of the contest.

In addition to Andrew and Fitzwater, another Open standout in James Hollingshead will also be at the Arnold UK event. With the showdown in just a few weeks, bodybuilding coach Hany Rambod shared his thoughts on a few of the frontrunners competing.

Hany Rambod Confirms Jacked Will Compete at 2022 Arnold UK: ‘George Mentioned He Is In’

Rambod opened the conversation by announcing that Andrew Jacked will compete at the 2022 Arnold UK contest despite suspicions that he was out due to Visa issues. He clarified that Andrew’s nutrition coach George Farah mentioned it.

“[The 2022 Arnold Classic UK] the next big show since the Texas Pro and one thing it has in common: Andrew Jacked. So, Andrew Jacked is in. We got confirmation — someone saw that George mentioned that he is in because there’s been a lot of talk about him being in, him being out.

I talked to several people — George did comment that he is in. So as of right now, he’s in. Those of you who think that he’s out and think he’s not going to be a part of the equation, he’s back in,” says Hany Rambod.

According to Rambod, Jacked has the momentum but believes the physiques competing at the Arnold UK are so different that it’s like comparing ‘apples and oranges to a degree.’

“The momentum he has… I think the person that is going to try to give him the most amount of trouble is [James] Hollingshead. You have James Hollingshead, who is regrouping, putting his physique back together. He looks massive. We’re going to have two different types of physiques going after this title.

I think the names that come to mind are Andrew Jacked because of the momentum we talked about, and then we have Hollingshead, who’s going to try to bring in some good conditioning with this crazy size. I think that you’re going to have apples and oranges to a degree but it’s going to be great to see him next to some other types of athletes,” says Rambod.

Rambod sees Martin Fitzwater pushing Andrew on stage again because of his conditioning. He added that Martin has worked on trying to bring a tighter package to his next show.

“Another athlete that’s going to try to take another run at him is the guy who placed second — Martin. Martin Fitzwater is going to be in this show as well. He took second in Texas and I know that he’s going to work on his tan, work on his conditioning to try to bring it in even tighter.”

Given the differences in competitors, Rambod believes the show might come down to aesthetics versus size.

Rambod believes Fitzwater’s back makes him a dangerous opponent. He added that mass monster Patrick Johnson could also surprise some people as well.

“From behind… I think that’s where Martin shines. And again, if Patrick Johnson or James really dial it in with that added size, it could be a really different story. We just haven’t seen him next to some of those guys. Those are going to be some new people that we would like to see those comparisons.”

Given the unique circumstances that Jacked is in, Rambod compared his season to the year Big Ramy won his first Olympia title in 2020.

“It’s [Andrew’s 2022 season] kind of what happened with Ramy for the first one [2020 Mr. Olympia] right. Because he was supposed to do a show, he got Covid, couldn’t do it. Then, he ended up going in, getting an invite, and ended up winning Olympia. But all those things, the continuous dieting.

I think earlier in the year, I think he was not even in the top two at I believe the Arnold, earlier that year. The year he won. It was one of those things where he kept dieting, dieting, dieting and he ended up getting dialed in just because of time. But if you are a person who tends to peak… not so good,” shared Rambod.

When asked if he’s the real deal and capable of doing well at Olympia, Hany kept it simple:

Rambod isn’t the only veteran of the sport who believes Jacked has a high ceiling in the sport. Bodybuilding coach Milos Sarcev recently named Jacked as an ‘immediate contender’ for the next Olympia title. The 1983 Mr. Olympia winner Samir Bannout also suggested that Jacked has the tools to make the first call out and top four at the contest on his first try.

After a heated contest at the 2022 Texas Pro, Martin Fitzwater and Andrew Jacked will run it back in Europe. With the addition of James Hollingshead and a number of other threats, Rambod believes Andrew Jacked is in store for a tough contest.