Ramy posted another physique update after fans accused him of shooting site enhancement oils into his delts. 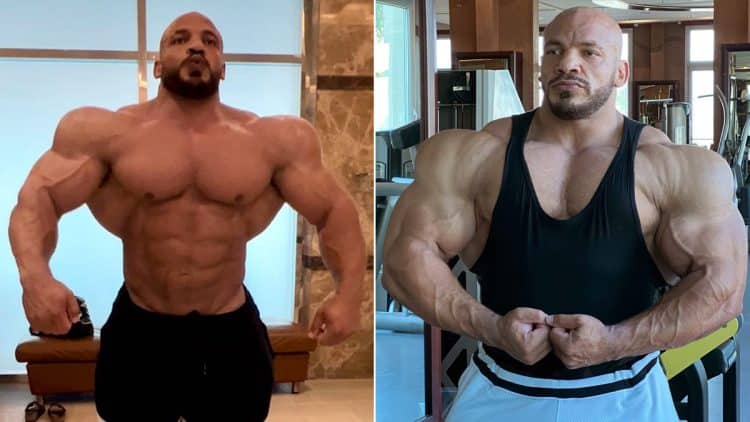 Mamdouh ‘Big Ramy’ Elssbiay has been under scrutiny recently after a physique update resulted in fans accusing him of injecting his delts with site enhancement oils like Synthol. The reigning champion dispelled those rumors with an impressive physique update made on Sunday, September 11, 2022.

It’s been a chaotic season for the two-time reigning Mr. Olympia winner Big Ramy. Despite the dominance he’s shown at the top of the sport, many have questioned his commitment to bodybuilding after missing a guest posing obligation at the 2022 Pittsburgh Pro. Eventually, he issued an apology for his absence but those worries about his commitment were brought into question again for wanting to retire at 38.

Dan Solomon, the Olympia President, was determined to get a better idea of where Ramy’s head was at, heading into a critical stage of the current bodybuilding season. After a candid discussion, Solomon said Ramy was finalizing his strategy and determined to produce a third Olympia title.

According to Ramy’s coach, Dennis James, the champion’s season is going according to plan. Ramy understands that many of the top bodybuilders in his division are working hard and he plans to bring a wow factor when he steps on stage to defend his title this winter.

Unlike previous years, Ramy has been more forthcoming with physique updates for his fans. Last month, the Egyptian native sent a warning shot to the rest of his competition after showing off a lean ripped physique at 337 pounds. Though, it appears one of his latest progress photos has many fans questioning whether or not the reigning Mr. Olympia is shooting site enhancement oils like Synthol into his delts/shoulders.

In an update made a week ago, Big Ramy showed off his current build while hitting a front-relaxed pose. While some were drawn to his tapered waist and full chest, other fans were quick to point out that his shoulders looked suspiciously inflamed with no striations.

In preparation for this year’s Olympia contest, Ramy is once again teaming up with Dennis James. After flying to Dubai to train the defending champion, he was astonished by the progress Ramy has made so far out from the contest. He added that one concern they are looking at is that Ramy’s traps (trapezius muscle) aren’t firing properly.

Following a number of commenters suggesting Ramy used Synthol in his delts/shoulders, the reigning champion issued yet another physique update on Sunday (September 11, 2022).

Unlike the first update, fans believe this picture looks less suspicious because of the flatter and less pointy appearance of his shoulders.

Ramy isn’t the only elite Open class competitor that’s been accused of shooting Synthol into his shoulders. Top Olympia finisher Hadi Choopan has been criticized for possible Synthol use in his medial delts. While there is no concrete evidence that this is true, Choopan’s former managers Hadi and Mahdi Parsafar have both claimed he shoots his delts with site enhancement oil.

In addition, bodybuilder/coach Milos Sarcev has talked about his experiences using Synthol. He said using Synthol in his arms was his greatest regret during his time competing in the sport.

Despite the allegations, seven-time Mr. Olympia Phil Heath believes Hadi Choopan has a solid shot at winning Olympia this year if Ramy leaves the ‘door open’ as he did last year.

RELATED: Nick Walker on Competing Against Big Ramy at 2022 Mr. Olympia: “If He Comes in Shredded, He’s Probably Going to Win Again”

While judges may mark a bodybuilder down for egregious Synthol use at shows, there is no concrete evidence that supports Choopan or Ramy used such compounds. With the contest in less than 15 weeks, it’s going to take a herculean effort to knock Ramy off his throne.