Tom Stoltman on his 2022 WSM victory: 'I think I am going to be the greatest ever…" 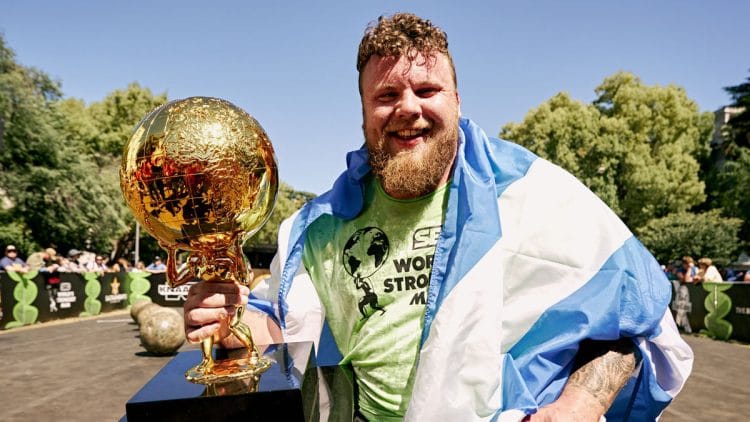 We are witnessing history in the making, and Tom Stoltman is the main protagonist of this story. After becoming the first Scottish athlete to win the WSM last year, Tom came back and defended his title this year. He did so by winning the 2022 World’s Strongest Man contest, which took place from May 24-29, in Sacramento, CA.

During the 2022 World’s Strongest Man competition, Tom Stoltman had to dig deep, leave nothing to chance, and win the title. Following Tom’s incredible performance, it became clear that there was no way he would accept anything other than first-place. However, to become the champion once again, Tom had to outperform three previous WSM champions. The end result proves that Tom did so with ease, as Martins Licis was 10.5 points behind him in second-place.

In light of his tremendous success, Tom Stoltman sat down with Fitness Volt to answer some questions. He talked about his feelings, future aspirations, and more.

Speaking in an exclusive interview with Fitness Volt after defending his title, Tom Stoltman expressed his happiness and compared it to last year’s win.

“This year meant a lot more because I wanted to come back and prove that it wasn’t just a fluke. I wanted to win it back-to-back and make more history. But also having my family here. My wife hasn’t been at WSM for two years. My coach hasn’t been here. The second one made it more special having all of them here.”

Going into the final two events of the 2022 WSM, Tom Stoltman was sitting in second-place, just behind Oleksii Novikov, who was very dominant up until that point. Tom explains what went through his head at those moments and how he felt.

“I knew how tough it was, but I knew that I prepped very well for this competition. And when you don’t make mistakes in World’s Strongest Man, you usually get rewarded. Took Novikov until the last two events to make those mistakes, but it rewarded me.

I was very confident (in winning the 2022 WSM). The events in the final, I just wanted to make sure I was top three in all of them. When Novikov went 3.5 points in front, I was not doing anything wrong. It was just people getting between us. My wife and coach said, ‘Just keep doing what you are doing.'”

Many people rightfully believe that Tom Stoltman will become one of, if not the greatest, Strongman of all time. So we asked Tom about his thoughts on that.

“Now, especially Strongman in Britain, I think I am going to be the greatest ever…

If you looked back 10 years ago and said to me that I would win World’s Strongest Man twice, I would have just laughed in their faces.

But to stand here as a two time champion, back-to-back, 27-years-old, I don’t want to look too much into the future… To be the greatest of all time would be something special.”

Tom Stoltman has had some incredible performances in almost all the events of the 2022 World’s Strongest Man. Most notably, he overhead pressed 240 kilograms (529 pounds) in the Flintstone Barbell. Tom also placed third in the Bus Pull event, which was almost as surprising for him, considering that he has always placed bottom two in these types of events.

“We had four WSM Champions in the final, so I knew this World’s Strongest Man was gonna be very hard and there were not gonna be many mistakes. In that Flintstone lift, I knew there were a lot of people that could lift some big numbers, but I just had to be consistent with it.

I was very confident with that lift… I just believed in my abilities, and when you believe in yourself, anything is possible. As long as your mind believes, your body will do.

It (Bus Pull) gassed me out, but my recovery and conditioning this year is so much better than last year. Of course, the Bus Pull was the hardest one, I think it was for everyone.”

Tom Stoltman did not place outside of the top three in any of the events in the 2022 World’s Strongest Man finals. His consistency seemed unparalleled, and his performance in this competition could arguably be one of the greatest ever. So Tom attributes his victory to his new and improved mindset.

“Being consistent for me was key, but I think just having a calm mindset. Last year I came with a different approach of kinda more angry and with more adrenaline.

But this year I have my wife and my coach do everything for me, so I was just calm and knew what I was capable of doing.”

Tom Stoltman intends to take part in some more competitions this year, most likely the 2022 Shaw Classic. However, the World’s Strongest Man contest is still his main priority, as he gets very excited to train for it. Tom also dedicated the win from the 2022 World’s Strongest Man to his late mother and, of course, his wife, who was finally able to celebrate his win in-person with him.