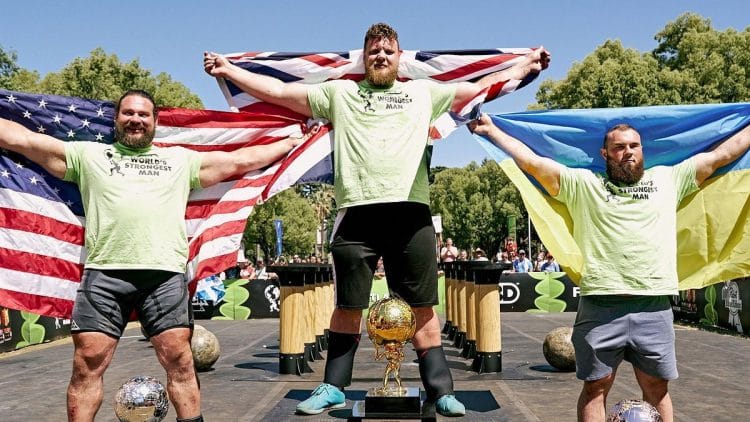 The 2022 World’s Strongest Man contest took place from May 24-29, in Sacramento, CA, and it was one of the most exciting events in recent memory. The field featured four previous champs, but only one of them added another title to their resume. Having outperformed 29 other competitors, Tom Stoltman claimed the title of 2022 World’s Strongest Man. This is Tom’s second consecutive WSM victory, as he successfully defended his title from last year.

From the start it was obvious that the 2022 World’s Strongest Man would be spectacular. It followed up on the expectations, as Tom Stoltman beat the 4x WSM winner, Brian Shaw, alongside Martins Licis (2019 WSM winner) and Oleksii Novikov (2020 WSM winner). We also got to see Oleksii Novikov set a new Flintstone Barbell World Record, but Tom’s victory is the most important takeaway from the 2022 WSM.

Tom Stoltman persevered through five tough days of competition without committing a single mistake that might have cost him victory. His consistency ended up being key for him, as no one else was able to maintain solid performances throughout all six finals events. As a result, Tom Stoltman became the World’s Strongest Man of 2022 and earned his bragging rights. Stoltman became just the tenth strongman in history to win multiple WSM Championships.

Tom Stoltman’s win in the 2022 World’s Strongest Man competition was no easy feat. Oleksii Novikov initially dominated the finals and it seemed like Tom wouldn’t even get a chance to overtake him. However, Novikov had a major slip up on the penultimate WSM event, as he finished in seventh place of the Power stairs and only claimed four points. Tom won nine points in the same event and took the lead going into the Atlas Stones. Obviously, Tom Stoltman was not going to lose in the atlas stones, so he did not give Novikov a chance to beat him in the overall leaderboards.

However, Tom Stoltman won his qualifying group with extreme ease. He was the sole winner on the first two days, having won all four events. As he was already qualified for the finals, Tom just took one point on the fifth and final event of the qualifiers. This turned out to be a very smart move, as Tom did not waste any unnecessary energy and looked very fresh in the 2022 World’s Strongest Man finals.

Apart from winning the WSM for the last two years, Tom Stoltman had some more notable performances, as he also won the 2021 & 2022 Britain’s Strongest Man.