Oleksii Novikov sets a new World Record and sits at first-place of the 2022 WSM finals on day one. 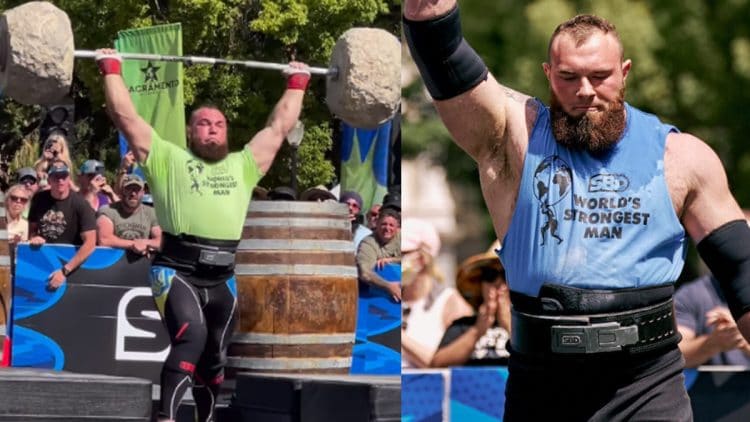 Oleksii Novikov has been one of the most dominant Strongman athletes over the past few years, but this year he seems to be on another level. Moving past all of his recent achievements, like winning 2022 Europe’s Strongest Man, Oleksii Novikov is now chasing his second World’s Strongest Man title, as he also won it in 2020. He comfortably qualified for the finals of the 2022 WSM, and is now also leading in the finals after three events. Oleksii Novikov broke the Flintstone Barbell World Record, which earned him massive points in the overall standings.

The Flintstone Barbell is one of the most classic and old-school events of Strongman. It is basically an overhead press, but throughout history, the majority of competitors’ techniques were behind-the-neck presses. However, we got to see some diversity in the 2022 World’s Strongest Man, as some were also doing a split jerk and standard shoulder presses. The last time we saw the Flintstone Barbell event on the WSM stage was in 1995.

The idea of breaking the Flintstone Barbell World Record was not originally in Oleksii Novikov’s mind. However, he got involved in an epic battle with Tom Stoltman, so they kept increasing the weight. It was very important for Oleksii to beat Stoltman in order to get one more point, and extend his lead. They both ended up going progressively heavier, which saw Oleksii Novikov press 246 kilograms (542.3 pounds), and Tom Stoltman not attempting the same weight. Gary Taylor held the previous World Record of 210 kilograms (463 pounds) since 1995.

Oleksii Novikov’s technique set him apart from the other nine competitors. He could now arguably be considered as one of the greatest overhead pressers of all time, as he has mastered lifting both with a dumbbell and a barbell. Oleksii also holds the 100-kg (220-lb) Dumbbell Overhead Press For Reps World Record. He claimed the record at the 2020 World’s Ultimate Strongman Feats of Strength.

Oleksii Novikov kicked off the race for 2022 World’s Strongest Man in style. He won both events in his group on day one of the qualifiers and followed up with solid performances across the next three events. He did just enough to make it to the finals without wasting too much energy.

Oleksii Novikov started the finals of the 2022 World’s Strongest Man, almost the same as qualifiers. He won two events (Deadlift & Flintstone Barbell) and placed third in the KNAACK Giant’s Medley. Novikov’s deadlift performance was fantastic, and it seemed like there was no scenario in which he would lose that event. Oleksii deadlifted a car weighing 360 kilograms (794 pounds) for 15 repetitions in just 60 seconds.

Novikov moves on to the second day of the 2022 World’s Strongest Man finals, which is today. Three events await him in the upcoming hours and there is no doubt that he will give his all to claim the most prestigious title once again.

Almost everyone knows that Oleksii Novikov is coming from Ukraine, which has been under Russian invasion for the past few months. It is incredible to imagine that Novikov is fighting hard to represent Ukraine in the best way possible despite not being able to train like usual.

In addition to representing Ukraine in competitions, Oleksii Novikov has made some big moves in order to raise some money for the Ukrainian people. Furthermore, after Oleksii placed second in the 2022 Arnold Strongman Classic, his prize money was raised to $80,000 with the aim of helping Ukraine.