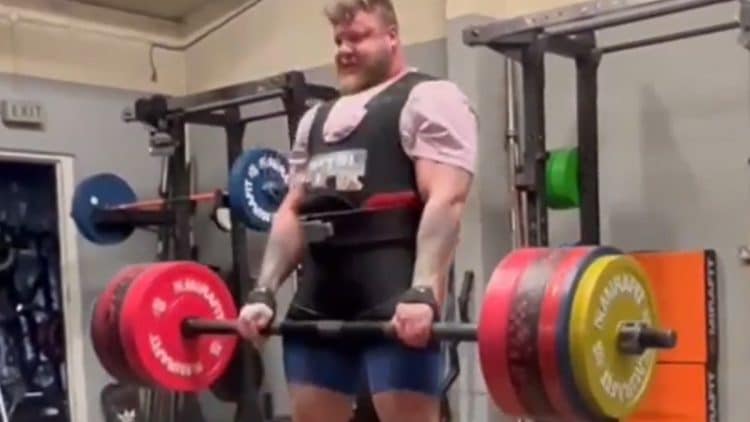 The 2021 World’s Strongest Man, Tom Stoltman, looks prepared for the new season of strongman. His first competition of the year will be the 2022 Britain’s Strongest Man (BSM), scheduled for February 26th at Utilita Arena in Sheffield, England. With just 10 days left until the competition, Tom is finishing up his preparation and has done his last deadlift set of the cycle. He managed to deadlift 340 kg (749.6 lbs) for ten huge repetitions.

To make it more impressive, Tom used an axle barbell instead of the normal one. He also did the 10 reps in less than 60 seconds. Tom stringed together nine repetitions without rest, but had to take a few seconds before the last rep. He was using a lifting belt, straps, and a deadlift suit, which are all allowed in strongman.

The second event of 2022 Britain’s Strongest Man will be the axle deadlift for reps. The weight that will be used is 360 kg (793.7 lbs), meaning Tom was pulling just 20 kg less than that. It is hard to see anyone beating Tom at the 2022 BSM, as the events really suit him. His biggest rival is probably his brother, Luke Stoltman, 2021 Europe’s Strongest Man.

After he is finished with the BSM, Tom will move on to one of the most prestigious competitions in strongman, the 2022 Arnold Strongman Classic (ASC). Judging by his training videos, he is ready for that too, as he posted a 360 kg (793.7 lbs) squat from training a few days ago, and one event will be a max squat.

Tom is the heavy favorite for both the BSM and ASC this year, as he has had a successful career filled with victories and podium finishes. At 27-years-old, Tom is one of the youngest elite strongman competitors, and he has already claimed the most prestigious title in the sport by winning the 2021 World’s Strongest Man.

Some of Tom’s greatest placings in competitions:

Tom has a bunch of other top 5 finishes, but these are the most notable. Tom also holds the Atlas Stone World Record, having lifted a 286 kg (630 lbs) stone over the bar.

If Tom starts the season off with a win in Britain’s Strongest Man, it could give him an enormous boost for the rest of the season. Judging by his lifts from training, especially the deadlift, Tom is in very good shape right now and seems satisfied with the progress he has made.