Try these exercises and you won’t be disappointed!

You know those popular, basic mass-building bicep exercises that you, we and most other gym-goers incorporate into our arm workouts pretty much every session which helps us sleep a little more peacefully at night?… Sure you do.

Now don’t get us wrong… the basic barbell/dumbbell curls and hammer curls work darn good and there’s a reason why we prefer to use them in alternating fashion every time we hit arms. But sometimes, it’s beneficial for us to change things up a bit… to do something different… unique even.

And utilizing a variety of movements can stimulate different fibers while challenging your muscles beyond what they’re used too; which can result in new development.

So, we put together a list of 7 unique bicep exercises you should definitely try for yourself and we’re sure you’ll like them. That is, of course, if you’re not already doing one or more of them.

But before we get into these awesome exercises, let’s talk about the anatomy of the bicep muscle.

The biceps brachii is, for the most part, a two-headed muscle located on the front of the upper arms which consists of a short (inner) head and a long (outer) head. The muscles are attached to both the shoulder joint (scapula) and the forearm (radius and ulna). (1)

And its function is to both supinate and bend the forearm while also flexing the arms at the shoulder joint. (1)

Now, there is another muscle located on the outer part and beneath the biceps called the brachialis. And the function of this muscle is to bend the elbow.

But, what does the brachialis have to do with bicep exercises? Well, if you want maximum width and size to this area of your upper arms, then you better be doing exercises to bring out its full potential.

Another muscle which gets targeted as a result of assisting in every bicep movement is the brachioradialis. This muscle is located on the knuckle side of the forearm (attached to the humerus and distal radius) and it enables flexion of the elbow joint while also contributing to supination and pronation of the forearm.

And how does learning about bicep anatomy help us maximize gains? Well, you can maximize muscle stimulation by understanding how the muscles attach and how they function. Certain exercises, angles, and hand positions can emphasize a certain muscle/head more effectively.

Now, let’s get into the bicep exercises…

The first five bicep exercises are courtesy of Jeff Cavaliere (Athlean X) MSPT, CSCS, who is an absolute mastermind when it comes to implementing effective training techniques. In the video, he talks about the anatomy of the biceps and explains that intensity is key for maximum stimulation since the biceps are a part of a hinge joint and options are limited.

And you can also perform bicep exercises using a specific/limited range of motion to improve the strength curve in a certain area of the bicep muscle.

Now, these exercises are meant to be a part of a complete bicep workout which you can do in successive fashion but feel free to do them in combination with any other bicep exercises of your choice. Just make sure to incorporate different angles and movements to maximize full development.

Check out the video and we have descriptions below…

The purpose of the cheat curl is to provide maximum overload which is essential for hypertrophy and strength progression. So, you’ll use a little more momentum to get the weight up on the concentric (positive) portion of the repetition. (3)

And you’ll perform the cheat curl to failure and then jump straight into the drag curl by lifting the elbows up and back behind your body to curl the weight which will place more of an emphasis on the long head of the muscle. You’ll take the drag curl set to failure as well. Do 3 sets to failure as part of the full workout.

Jeff Cavaliere explains in the video how the chin-up requires all three important actions (supination, elbow flexion, and shoulder action) necessary for stimulating the entire bicep muscle. So, the wrist remains supinated in a fixed position while the elbow flexes during the chin-up, and you get peak contraction with the action at the shoulder.

And you’ll use enough weight on this exercise to where you can reach about 5-6 reps. Then, you’ll strip the weight and burnout by performing chin-ups only through the top half of the repetition to get peak contraction which is an intensity technique. Do 3 sets to failure as part of the full workout.

The banded chin curl is used to get the full supination movement against resistance which the previous two exercises did not allow. So, when you curl the weight upward, you’re able to turn your wrists away from each other to get that peak contraction.

But the reason for using the resistance band is because it makes the exercise more difficult. And allows you to increase strength through the middle portion of the repetition which is often the most challenging during a standard bicep curl. But you’ll also emphasize more of the inner bicep head during the banded bicep curl.

So, you’ll grab two dumbbells which will allow you to get 10-12 reps and each set should be taken to failure for maximum benefit. Do 3 sets to failure.

The incline dumbbell curl is a great exercise which is beneficial for maximizing the initial portion (bottom) of the curl and it’s not that uncommon of an exercise either. But this variation has a slight twist which many people may not take advantage of.

And that is flexing the triceps during the eccentric (negative) portion of the repetition to get a maximum stretch in the biceps, more especially, the long (outer) head. Do 2 sets to failure. 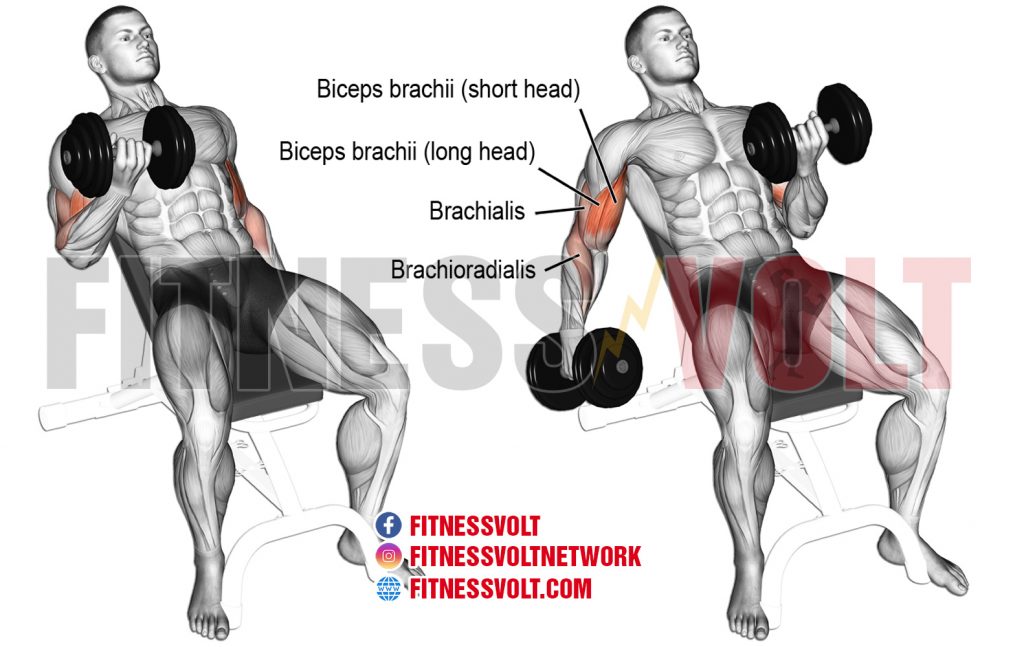 This bicep trifecta is meant to finish off a workout involving the aforementioned exercises but you can fit into your arm workouts however you please. And the benefit of these three exercises is that you target the outer head with the supinated curls, the brachialis with the pronated curls, and the inner head with the “no money” curls.

Use moderately heavy dumbbells and get a good squeeze during each repetition. Do 2 sets of 8 reps per arm for each exercise.

You may or may not see anyone doing Prone Incline Barbell exercise at your gym but it’s an awesome movement that’s definitely unique.

But the great thing about this movement is that it’s really hard to use too much momentum. So, it’s best to use a lighter to moderate weight to ensure you’re getting peak contraction during each repetition.

The exercise involves lying prone (face down) on an incline bench adjust so that it’s not too low. You want to be able to place your feet on the floor to keep your upper body higher up on the bench. Or you can use a decline bench with foam rollers and place your triceps against them to do the curl.

You’ll let the barbell hang and then perform the exercise as you would normally but avoid bringing the elbows up and forward. And use a weight that you can do a minimum of 10-12 reps with.

This exercise is sure to blast your biceps and associated muscles used during the movement.

In one study which compared the effectiveness of several common bicep exercises; the concentration curl reigned supreme for electromyographic (EMG) activity (muscle activity). (4)

And that’s because there’s essentially little to minimal momentum available with this exercise (there shouldn’t be at least) since the arm is pinned against the inner thigh. So, the weight load is highly concentrated on the target bicep muscle.

But… the study was conducted using a supinated (underhand) grip concentration curl. However, if you turn your wrist to a pronated (overhand) position, then the same principles apply. 10-12 reps should be a good number to aim for with this exercise.

Try these 7 exercises next time you train biceps and you might just want to keep them around for good.

Doing the same exercises every workout can get boring after a while but now you have options. Now, some of these exercises are a bit more involved than the standard curl but that’s not necessarily a bad thing.

We’re trying to achieve as much growth as possible and these awesome, unique bicep exercises will no doubt push you past your perceived limitations which is also necessary for getting past those plateaus.

So, turn up the intensity a little and keep the gains coming!

Nick Walker has his eyes set on the 2023 Arnold Classic, taking place from March 2-5 in Columbus, OH. Walker shot to fame...