Here’s a full comparison of these two monster movements, but is one superior?

The bicep curl and hammer curl are staples in most arm training routines.

Each one is performed in the hopes of achieving a slightly different outcome but both actually do work all of the same muscles; however, to a different extent.

But if you want huge arms, then focusing on both is highly recommended. They’re mass and strength –building movements which when done properly, will yield darn good results (Who doesn’t like results)?

So, here’s some great information we think you can use to your benefit. We’ll explain the muscles worked, benefits, exercise instructions, tips, variations, and a workout routine you can do for big guns… 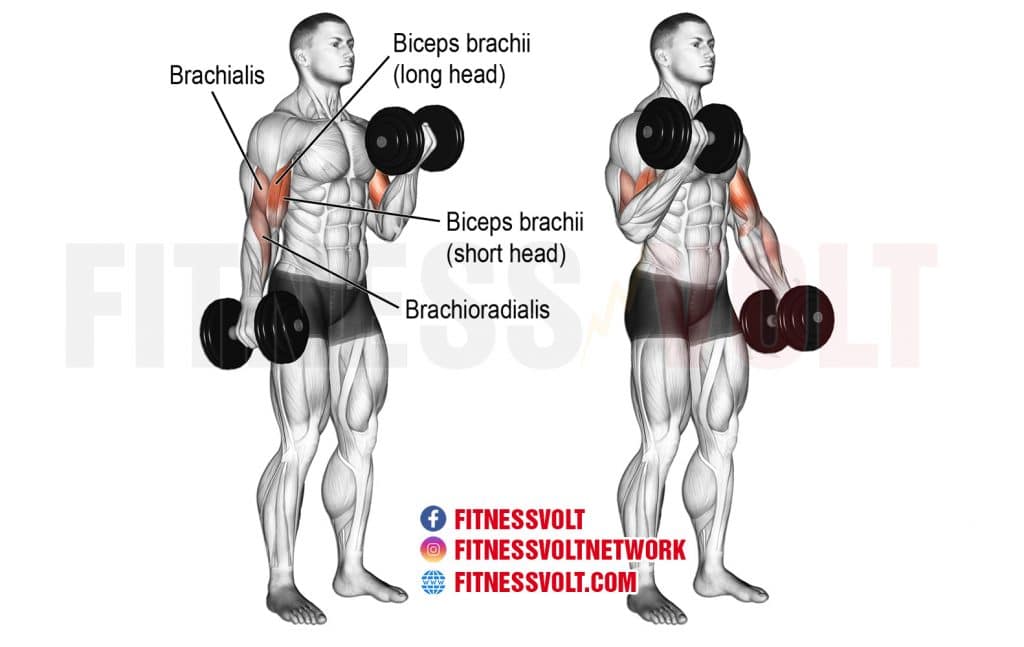 Make no mistake, the bicep and hammer curl work the same muscles since both are necessary for elbow flexion. However, there are some differences you should know about…

The bicep curl targets more of the biceps brachii (Biceps) which consists of a long (Inner) and short (Outer) head.

But the forearms, brachialis (Located on knuckle side of the forearm), and brachioradialis (Located beneath and on the outer part of short bicep head) muscles are definitely engaged during any variation of a supinated (Underhand) curl. (1)

The hammer curl is used for the purpose of targeting the brachialis but the brachioradialis is also worked significantly. One study showed that the bicep muscle has a biomechanical disadvantage when the wrist is in a pronated (Overhand) position. (2, 3) 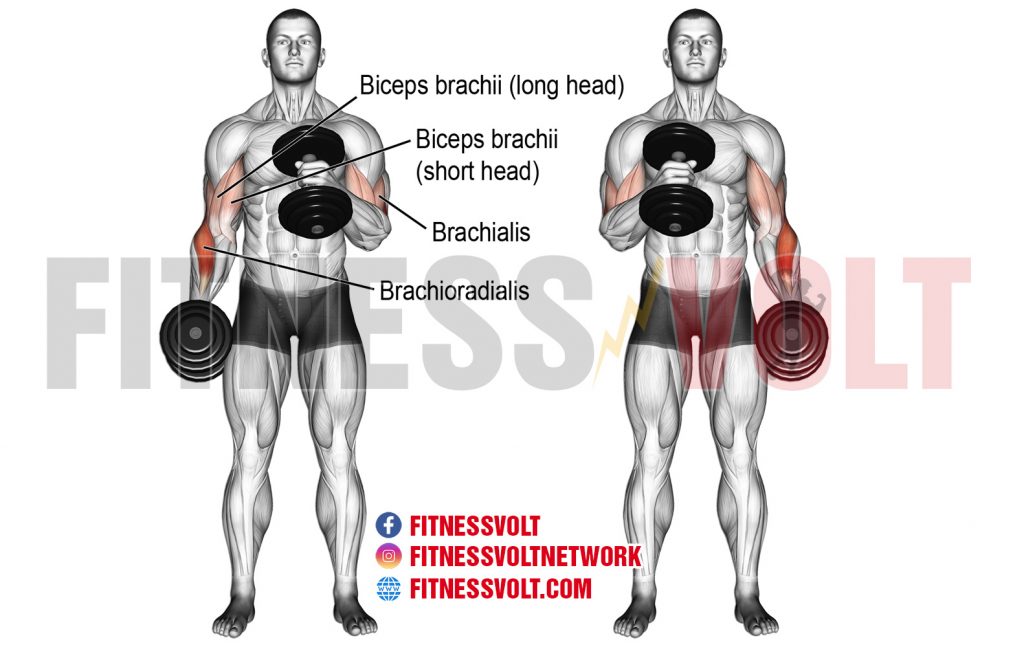 So, in a neutral or hammer wrist position, the brachioradialis contributes more to elbow flexion than the bicep.

Any curl variation will build muscle and strength (That’s just a side effect of weight training). The bicep curl will maximize bicep size while the hammer curl will make your brachialis and brachioradialis muscles larger and stronger as well.

These muscles are also heavily involved in pulling movements (Rows, pull-ups, deadlifts, etc.) and that’s why it’s important to train them directly so they can assist effectively.

A curl variation will also strengthen and stabilize the wrists. But you want this process to occur gradually; which is why progressive overload is key. (4)

This is where you slowly increase the poundages used during training so your muscles can continue to grow from the progressive stress placed on the target muscle/s.

It’s always important to warm up before attempting your working sets. So, do two sets pyramiding up in weight starting from 30% of your one-rep max, and doing another set at 50% of your 1RM.

Then you can continue to pyramid up into heavier weight. You should not feel any type of pain during either of these exercises. So if you do, stop and lighten up the weight or try warming up a little more.

How To Bicep Curl

How To Hammer Curl

There are countless bicep and hammer curl variations that it can get pretty overwhelming. But it’s best to keep things simple and go with the proven and effective movements. 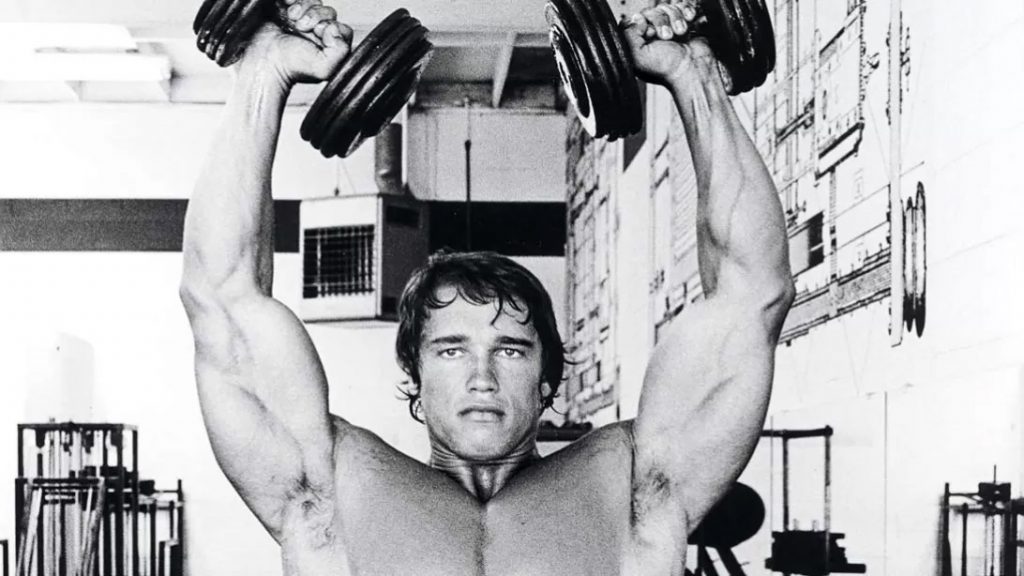 But an important thing to remember is that an exercise has to feel good for you. If you cannot achieve maximum mind/muscle connection then you might want to either think about lowering the resistance or trying other exercises.

We’ll base the variations from the barbell curl as the default bicep exercise and the dumbbell for hammer curl variations. And you don’t need much more than the following exercises as they cover all bases.

The preacher is performed on a slanted bench while seated or standing. This is a great exercise for really isolating the biceps and is a great addition to a bicep routine.

It’s important to not extend your arms all the way down and lockout your elbows because you can suffer a bicep tear this way. And never use really heavyweights either. 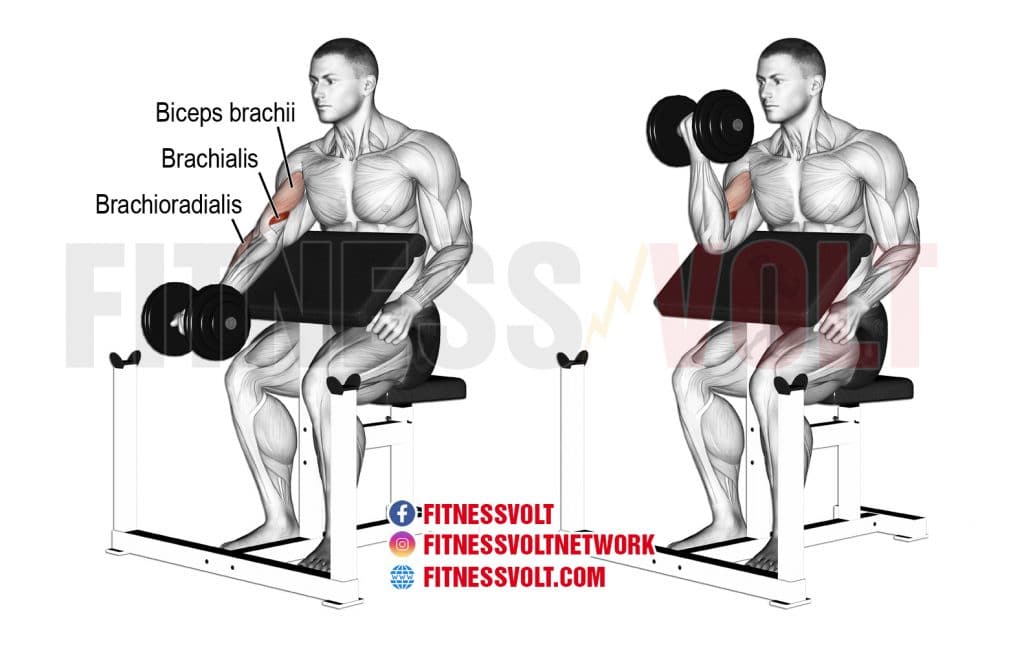 The EZ curl bar is great for lessening wrist strain. It’s an excellent training tool for getting the maximum benefit out of your curls.

Dumbbells are a must in your workout routine because they work stabilizer muscles and you can train one bicep at a time. So, if you have a lagging muscle, then dumbbells can bring it up to par.

Avoid swinging too much when doing a dumbbell curl. You can use a little momentum but that’s as far as you should go.

Cables are a perfect way to train the brachialis and brachioradialis muscles.

You’ll hold the rope with a neutral or hammer grip and simply perform curls as usual to work the forearms and biceps. But again, do not lock out your elbows when your arms are extended during the negative portion of the exercise.

You’ll simply grip the dumbbell with your thumb on the same side as your fingers and curl the dumbbell across your body while keeping your wrist rotated away from your body. And you’ll see just how effective this exercise is for working the brachialis and brachioradialis!

Using machines is a completely acceptable way to train your arm muscles. You can really place an overload on the target muscle; which in turn supports muscle hypertrophy and strength.

Oh… and don’t lockout! (We feel the need to remind you for your safety).

Now, this routine is best for a once-per-week arm workout. But, if you train these muscles twice per week, then you can subtract one set per exercise. Unless you’re more advanced and you know how much volume you can tolerate… but then, what would you need us for?… just kidding, just kidding.

Training biceps is a rather simple process which does not need to be complicated. Heck… they don’t even need much training if you’re training your back effectively since biceps are heavily involved.

But they do need direct work to maximize their development and we hope you found this information very helpful for getting the best results possible.

Variety is a great thing but using proper form and utilizing exercises which work best for you is key!

But is there really one best exercise between the two for building the arms of your dreams?… Nope (Should be pretty obvious by now), they are both very necessary for building head-turning arms!