See what went down behind the scenes at the 2020 World's Strongest Man contest in Bradenton, Fl. 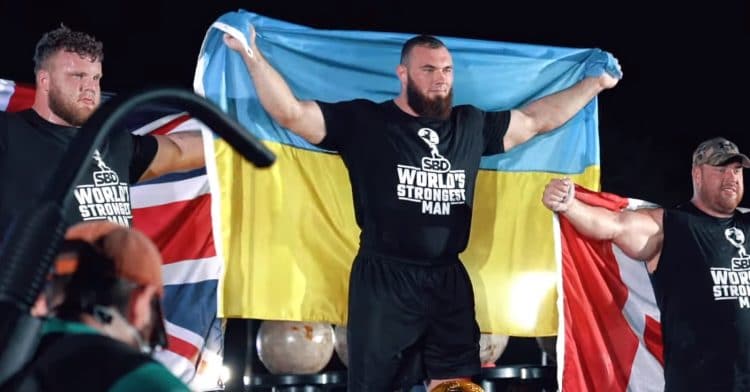 Despite a very underwhelming most of 2020 (for so many reasons), the most anticipated events in strength sports, bodybuilding, and fitness did go on as planned (even if dates and locations were changed).

One of which was the 2020 World’s Strongest Man, which took place in Bradenton, Florida as it did in 2019. Of course, there were no spectators allowed this year but was great nonetheless.

Oleksii Novikov of Ukraine was the winner and also the youngest World’s Strongest Man champion ever at just 24 years of age. Not to mention, he broke a world record in the Silver Dollar/18-inch deadlift.

Of course, the event wasn’t as competitive compared to previous years with many of the top guys out including last year’s winner Martins Licis among others. But a good event nonetheless and we can’t take anything away from Novikov’s historical victory. He put on quite a spectacle and ran away with the title.

Recently, retired Strongman competitor and 2017 World’s Strongest Man Eddie “The Beast” Hall uploaded a video to his YouTube where he shared some unseen footage from the event because it’s always cool to see what goes on behind the scenes.

Hall’s pick was Canada’s JF Caron who placed third overall but all athletes gave their very best this year.

Anyhow, he provided some of the competition footage of the final that started with the Giants Medley. Adam Bishop took that event but then the deadlift was up next and that’s where Novikov smashed the Silver Dollar deadlift record with 1185 lbs/537kg and made it look effortless.

In the video at the 13:39 mark, Hall was saying that Novikov “has got almost the perfect body for deadlifting” because of his shorter torso and long arms.

This one had JF Caron, Jerry Pritchett, and Adam Bishop tied for 2nd with 1122 lbs.

Up next was the keg toss where athletes attempt o throw 8 kegs over a 15-foot high post. Novikov was in the lead at this point and Bishop was right behind him. But the placings changed up a bit from here on until the final result.

This event went to Tom Stoltman who completed the keg toss fastest. Hall thought he could have won the first event but you could see in the beginning that he dropped the anvil.

JF Caron went on to win the next event, the Hercules Hold, where athletes had to hold up two heavy posts using their arms. He managed to last 52.67 seconds while Kevin Faires took second in this event with a time of 49.22 seconds.

At this point, Caron was in first and Novikov was in second. Stoltman had an underwhelming performance with this event though.

4x World’s Strongest Man Brian Shaw was in 6th at this point and it wasn’t looking too good for him to make up ground nearing the last few events.

The 12th event was the log ladder that entailed athletes having to clean and press 5 logs starting from 130kg, then progressing to 140kg, 150kg, 160kg, and finally 182kg.

Stoltman redeemed himself after a lackluster Hercules Hold, pressing all 5 logs in 49.45 seconds ahead of Pritchett and Novikov.

Hall talked about how this was going to be challenging even for the strongest of competitors since they’d be tired and “dehydrated” at this point.

Novikov was in the lead by 4 points after the log ladder even after he placed third. But his performances heading into the Atlas Stones would mean he only needed to place in the top six to win the 2020 World’s Strongest Man contest.

The big bad Atlas Stones were next up and the final event of the competition. This is where nerves are super high, but for Novikov, there was no doubt in his mind that he’d do well enough to win the first place trophy.

Of course, he had to contend with other athletes who were better at this event. But it didn’t matter.

Before the video showed this final event, Eddie Hall brought over last year’s champ Martins Licis and teased him about losing his title although he didn’t compete.

Licis jokingly responded, “I think it’s actually rigged, I think it’s cheating, I’m not conceding my title. I’m going to sue everybody responsible for thinking the title should be passed on to Novikov.”

But in all seriousness, he acknowledged that although he expected Novikov to do well… he wasn’t expecting Novikov to smash the competition as he did. He and Hall were blown away by the young champion’s performance.

But to wrap up, Jerry Pritchett of the US won the Atlas Stones, with Scotland’s Tom Stoltman placing second. Novikov didn’t complete the fifth stone, but again, it was enough.

Afterward, Hall said again that he thought Stoltman may have won the competition if not for him messing up in the first event.

Novikov ended up with 47 points to finish and Stoltman had 43.5 points.

“If he hadn’t tripped up on that first event, I reckon Tom would be World’s Strongest Man right now. It’s these little mistakes that could cost you the title.”

Then it was the winner’s interview with Oleksii Novikov. Hall told the newly crowned champ that he genuinely believes he could go on and beat the record of five wins currently held by Poland’s Mariusz Pudzianowski.

While it’s too early to predict that, Novikov certainly has a very big future in the sport.

Plus, after seeing someone else with the title, Martins told Hall that he plans to come back.

But he wasn’t too upset about it.

“I’m genuinely excited, all my thoughts are racing about how I’m going to get stronger than before.”

Then you have the very young and talented Mateusz Kieliskowski of Poland who is usually a top contender. So it will not be easy for anyone to win multiple titles with all the talent in the sport.

But it will be super exciting and we will be sure to keep you updated on Strongman events.

That’s it for now, and in the meantime, we get to watch Eddie Hall train to punch Hafthor Bjornsson’s head off and vice versa next year.

At the beginning of 2022, Oleksii Novikov shared petitions and tried to help his country and its citizens after they...