Develop the strength, power, and conditioning of a Viking warrior with our latest workout. 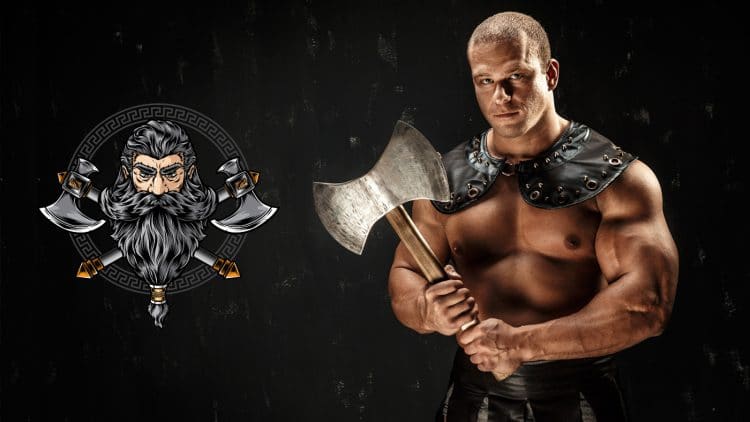 Ancient history is rich with tales of elite warriors. Some of the most famous include the Spartans, Mongols, and the armies of Rome. Without the luxury of modern weapons or transport, these groups conquered vast regions and, in many cases, simply showing up for battle was enough to secure victory. Their reputations were THAT fearsome.

One of the most dominant warrior groups was the Vikings. Intrepid explorers and ferocious fighters, during their 300-year dominance, they made their presence felt throughout Europe, North Africa, the Middle East, and even North America.

So, what did it take to be a Viking?

The first thing to consider is transport – or a lack of it. Coming from Norway, Denmark, and Sweden, Vikings either rowed or marched their way to battle, carrying all the equipment they needed. This meant they had to be cardiovascularly fit and have great muscular endurance. Bear in mind that at the end of their journeys, there was a battle waiting to happen, so they needed to be resilient too.

Then there was the conflict itself. Ancient warfare was hard and brutal, usually involving two massed armies coming together in a colossal clash of weapons and men. There were tactics, and things like ambushes and false retreats were not uncommon, but in many cases, it was simply a matter of the strongest warrior will survive. Ancient warriors often fought from dawn to dusk, with the two armies separating for the night only to resume fighting the following day.

Unlike modern weapons, which are both light and powerful and can kill from a distance, Vikings used axes and swords, and conflicts were settled face-to-face. These “tools of the trade” were heavy, requiring great strength to wield. If a Viking became too tired to raise his ax or shield, they’d be an easy target for an opponent, so endurance was just as important as brute strength.

Living the Viking life meant being fit and strong. However, we’re not talking about the fitness of a marathon runner or the strength of a powerlifter. Instead, the Vikings were more like our modern-day MMA fighters and elite CrossFitters. They were the ultimate fitness all-rounders.

Being a Viking was also a state of mind. They believed in a type of heaven called Valhalla, which could only be entered after “a good death,” preferably in combat. To die of old age was not the Viking way. Instead, they wanted to go out in a blaze of glory!

So, while we can’t promise to turn you into a Viking, we can help you develop the fitness and strength the Vikings needed to be such a dominant fighting force. As for entering Valhalla, you are on your own there, but applying that “do or die” mindset to your workouts will ensure you achieve the best possible results from this program.

Viking life was tough. When not fighting battles, they rowed or marched to their next destination, worked on their farms, or hunted or fished for food. All of these activities demanded a combination of strength, power, and endurance, not to mention mental resilience.

There were no labor-saving devices, and the average Viking was physically active and busy from dawn until dusk. As it says in the Viking era book of Norse poetry, The Havamal, “Wake early if you want another man’s life or land. No lamb for the lazy wolf. No battles are won in bed”.

Mirroring these demands means no split routines for wannabe Vikings. Instead, you’re going to train your body as it works in nature – as one synergistic unit.

Each workout ends with a finisher to test your mettle and develop mental toughness. Viking battles were brutal, blood affairs, often lasting all day. There were no three-minute rounds or time-outs. Once the enemy was engaged, the fight continued until one side was defeated or surrendered. Finishers are designed to push you beyond your limits even after your main workout has finished.

Do each of these workouts once a week on non-consecutive days, e.g., Monday, Wednesday, and Friday, to allow adequate time for rest and recovery. If you’ve got the energy, you could do some additional LISS or HIIT cardio on the days in between. However, make sure you take one day off a week to avoid overtraining.

Before starting any of the following workouts, spend a few minutes preparing your body and warming up. Begin with 5-10 minutes of light cardio to get your blood pumping followed by some mobility and dynamic flexibility exercises for your main joints and muscles. Finally, prep your shoulders with 50-100 reps of band pull-aparts. 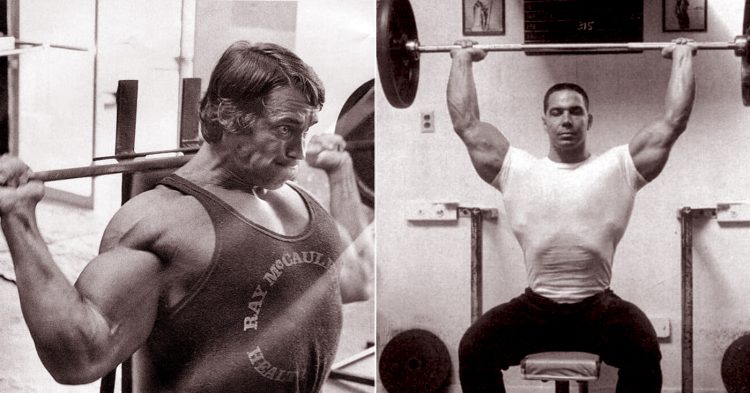 AMRAP – As Many Reps As Possible

Finisher: Vikings weren’t really known for their horsemanship. They did ride, but more often than not, they walked from place to place. Or, rather, they marched carrying all their gear. This finisher simulates walking to or from battle with your ax and shield.

Holding a single 10-15kg dumbbell or kettlebell, hop on a treadmill and walk half a mile. It doesn’t matter how you carry the weight so long as a) you don’t stop walking and b) you don’t put the weight down. You could also do this exercise outdoors if preferred. 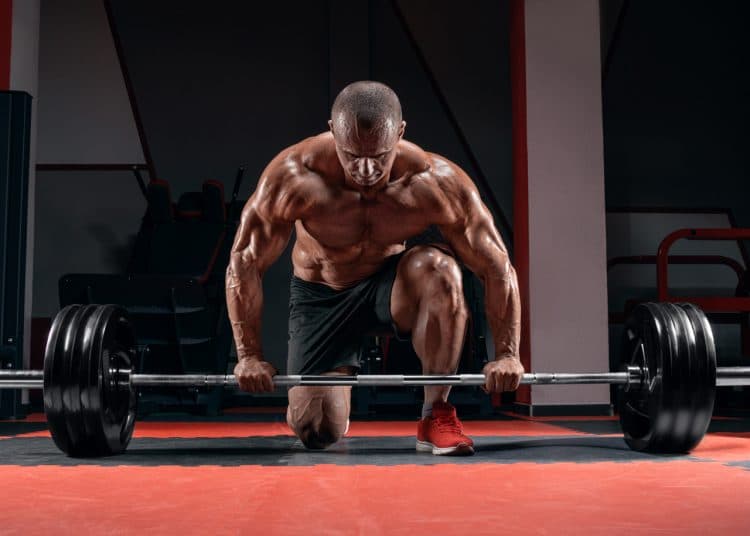 Finisher: Fighting with a sword or ax was a brutal activity. You couldn’t pace yourself or take it easy; even a momentary loss of momentum could mean your end. This finisher is designed to replicate the demands of engaging an enemy, beating them, and then running to your next opponent to do it all over again.

Set up two markers 10 yards apart. Place a medicine ball or slam ball on the floor and stand next to it. Sprint out to the far marker and back (20 yards) and then do 10 medicine ball slams. Drop the ball, sprint out and back again, and do ten more slams. Continue this sequence for three minutes, rest one minute, and then do two more sets.

AMRAP – As Many Reps As Possible

Finisher: Vikings were renowned rowers. This workout, aptly called the Viking Rowing Challenge, will test your willpower as it builds your fitness and endurance. Take a moment after finishing your woodchops, and then do the following intervals:

Row each interval as fast as you can and then rest for the same duration before doing the next one. So, if it takes you 2 minutes 45 seconds to row 750 meters, that’s how long you get to rest before you row 500 meters. As the sprints get shorter, so too do your rest periods.

No rower? No problem. You can also do this workout by running on a treadmill; the duration of each interval should be very similar.

Get even more from your workout with the following hints and tips. 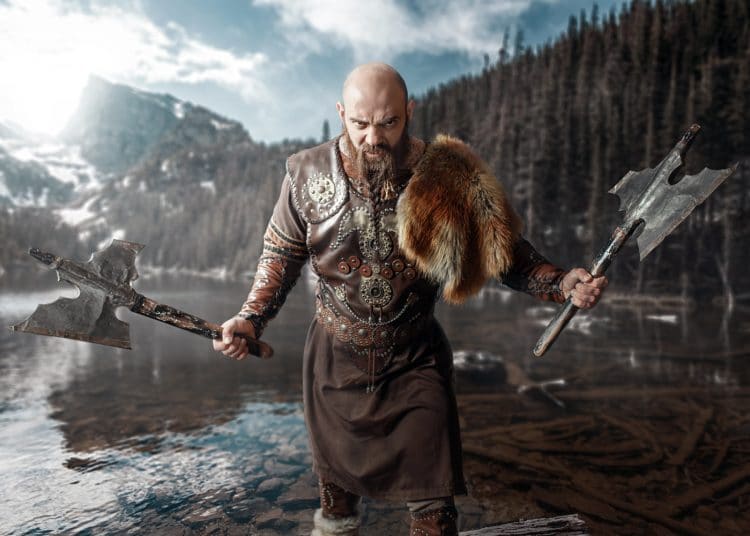 Vikings used an herb called bog myrtle to increase energy, stamina, and aggression. In fact, Vikings under the influence of bog myrtle were often known as berserkers, which gives us the modern phrase “going berserk,” meaning losing your mind with fury. Get yourself ready for your Viking workout with a shot of pre-workout.

You won’t make much progress if you do the same workout over and over again. Challenge your muscles to get stronger and grow by using progressively heavier weights.

Even just five more pounds on the bar will help make you stronger. However, do not sacrifice good form for more weight. Poor form can lead to injury, and you’ll lose more than you gain if you hurt yourself and need to take a break from training.

Feed your muscles, fuel your workouts

Food is fuel. Make sure you keep your body supplied with energy and nutrients by eating a healthy, varied diet that contains plenty of protein, complex carbohydrates, and healthy fats.

Dine like a Viking and take a page from the Paleo diet, avoiding most processed foods and eating more of what you could have hunted or grown.

Intense training takes a lot out of your body, depleting your energy levels and breaking down your muscles. Your body only repairs and builds while you rest, so make sure you get at least 7-9 hours of sleep per night. Vikings were famous revelers, but they also enjoyed relaxing. After all, days spent raiding and fighting were exhausting!

[Related: The Importance of Sleep for Building Muscle and Losing Fat]

While you can change the exercises in this program, make sure you stay true to the spirit of the workouts. For example, while replacing back squats with front squats is perfectly acceptable, doing leg extensions is not.

Choose compound exercises that allow you to lift significant weights. After all, that’s what’s going to give you the strength and power of a Viking.

You’ll probably have noticed that there are no direct arm exercises in the Viking workouts. That’s because both the biceps and triceps are trained indirectly during each pulling and pushing exercise.

If you want to add some direct arm training, put it at the end of the workouts, and do just one biceps and one triceps exercise. Thick bar biceps curls, hammer curls, dips, and close grip bench presses are all excellent choices. Concentration curls and kickbacks are not suitable exercises for Vikings!

Being a Viking was a way of life. Treat your Viking workouts the same way. Commit to this program for the next 6-8 weeks, doing your utmost not to miss any workouts. After that time, you’ll be ready for another training plan, such as our strength sports workout, functional bodybuilding plan, or Myo-reps workout.

The Viking workout is not for the faint of heart. It’s designed to develop all of the fitness components prized by Norse warriors: strength, power, and endurance. It should also help build your determination and steadfastness – that all-important warrior mindset.

If you are ready to push yourself to the limit, this is the workout for you. It won’t be easy, but your commitment and effort will be rewarded.