Revealing how Vin Diesel has maintained his beefed-up physique since the 90s. 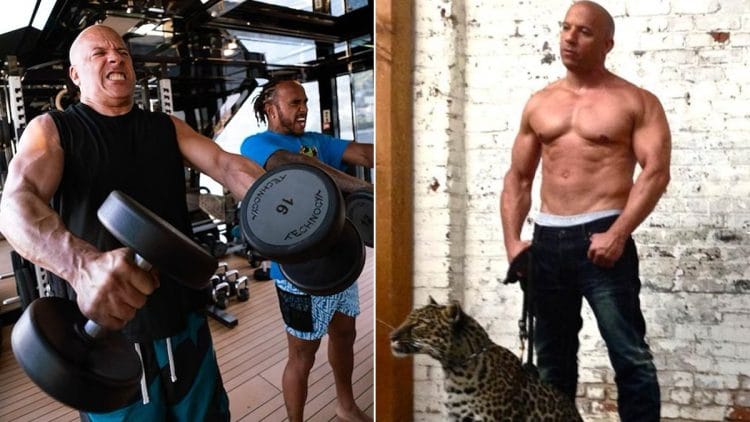 Vin Diesel is one of Hollywood’s highest-grossing actors. He made his acting debut in the 1990 film Awakenings. Diesel got his big break after director Steven Spielberg cast him in the 1998 movie Saving Private Ryan after watching his breakout performance in Multi-Facial (1995), a short film that he wrote, directed, produced, and starred in.

For over a quarter of a century, Diesel has been a mainstay of the action-thriller genre and the status quo is unlikely to change any time soon. The 1967-born actor is in no mood of taking his foot off the gas. He still does his own stunts and sports a jacked physique that can give many amateur bodybuilders a run for their money.

Be it delivering blockbusters or staying in shape throughout his acting career, Diesel has been one of the most consistent A-listers. That sort of consistency doesn’t happen by chance. Diesel is dedicated to his craft and the fitness lifestyle.

Mark Sinclair, also known as Vin Diesel, was born on July 18, 1967, in Alameda, California. He was raised by a single mother and has never met his biological father.

Sinclair got into acting at the age of seven. He appeared in a children’s play called Dinosaur Door. The young actor remained involved with the theater throughout adolescence. He attended New York City’s Hunter College, where he studied creative writing, which led him to begin screenwriting.

Sinclair worked as a bouncer at the Tunnel nightclub in Manhattan, NYC. It was then that he took on the name Vin Diesel, wanting to sound tougher. Vin comes from his mother’s married last name Vincent whereas his friends gave him the name Diesel as he was always very energetic.

Diesel directed a full-length movie titled Strays, which screened at the 1997 Sundance Film Festival. He played a gang leader in the movie.

Diesel is a private individual and doesn’t share much about his personal life. He has been in a relationship with Mexican model Paloma Jiminez since 2007. The couple has three children, Hannah, Vincent, and Pauline, who was named in honor of his late Fast and Furious co-star Paul Walker. He is also the godfather to Walker’s daughter Meadow.

Since he isn’t in his physical prime anymore, Diesel has to work extra hard to maintain his muscular frame. With age, an individual’s metabolism slows down and so does the body’s natural release of testosterone, leading to a slow decline in muscle mass and strength.

“My diet, like my weights regimen I suppose, is very much your typical diet for people who want agility, low body fat, and higher muscle mass.” — Vin Diesel talking about his diet

Here’s a breakdown of a typical days’ eating for Vin Diesel:

Diesel eats a healthy dose of low glycemic index carbs early in the morning. This provides a slow release of energy to fuel him through his day. He also gets a good serving of healthy fats such as chia seeds and almond butter, along with protein.

Protein is the actor’s main focus for lunch. Both tuna and turkey contain low saturated fat and a good dose of omega-3 fatty acids. The addition of vegetables such as sweet potatoes provides the glucose that is needed to replace the glycogen that is used up in the workout.

Diesel allows for more variety with his dinner meals. Here are a couple of his favorite meals:

In addition to these three main meals, Diesel will occasionally snack throughout the day. Snacks, however, are always healthy. They might range from a piece of fruit such as an apple or orange to crackers and cheese or a protein shake.

“When I was younger, I was trying to gain as much weight as possible. Now, I focus on each body part to define it.”

Diesel is a proponent of supersets. He often does six supersets for each body part to ensure high intensity. A superset involves doing two different exercises back to back with no rest between them. The actor then rests for about 90 seconds before doing the next superset.

The workout below is one of Diesel’s favorites. Remember: He constantly switches up his training routine to keep his muscles guessing. If you perform the same exercises over and over again, chances are you will eventually hit a plateau.

“I shock the muscle with two sets of powerlifting and then go into higher-rep sets afterward.”

Diesel does not spend as much time in the gym as he used to in his younger days. Even though he trains five days per week, the use of supersets means that he’s in and out of the gym in less than an hour every day.

“I work out less and enjoy it more these days. It’s a time in my week where I don’t have to juggle things. I can just exercise and be present. You do what you love and it’s not work. That’s my philosophy.”

Vin Diesel is not a big believer in supplements and prefers to get the bulk of his nutrients from whole foods. However, there are a few compounds that he does include to round out his nutrient profile and boost his muscle-building potential.

Here’s what he takes:

Vin Diesel’s consistency over the years coupled with his no-nonsense hard and heavy training philosophy has helped him stay on the top of his game. The A-lister’s transformation program is a great fit for older men — above 40 years old — who want to get in shape.

Remember: If you are a beginner, you should begin your fitness journey by learning how to perform compound exercises correctly. You could stack on the supersets and other advanced training principles as you gain more experience inside the weight room.

The Best Russian Twist Alternatives for a Rock-Hard Core