Get Ripped Like Tom Holland in 'Spider-Man: Far From Home.' 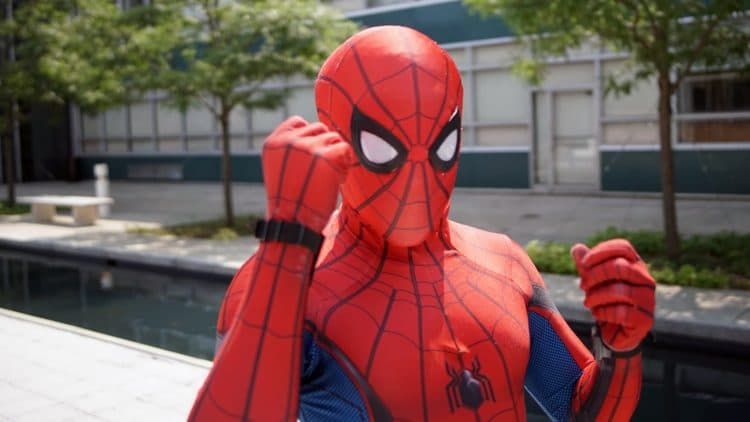 Spider-Man’s webs, wit, strength, speed, agility, and spidey-sense make him one of the most iconic superheroes of all time. I would go as far as to say that Tom Holland is the best-suited actor for the role of Spider-Man.

I am glad you asked.

A superhero who can climb walls and swing from skyscrapers needs to be athletic and muscular. Actors who played the role of Spidey until ‘Captain America: Civil War’ lacked these qualities. Sorry, Tobey Maguire, but being skinny does not cut it anymore.

Tom Holland has a background in dance and gymnastics – a perfect combination for Spider-Man’s character.

In fact, to nail an action scene in ‘Spider-Man: Far From Home’, Holland decided to launch off a trampoline into a backflip and then land in frame with Gyllenhaal to deliver his lines. Tom’s idea surprised even the veteran actor Gyllenhaal.

Who is Tom Holland?

Holland is an English actor who attended the BRIT School for Performing Arts and Technology in London. He was discovered by choreographer Lynne Page, an associate to Peter Darling, choreographer of Billy Elliot and Billy Elliot the Musical while performing at a dance festival.

The Impossible (2012) was Tom Holland’s breakthrough role. He won a string of awards, including the Hollywood Film Festival Spotlight Award and nominations for best newcomer for his role in the film.

When he was 18-years old, Tom auditioned for four films, including Spider-Man. Long story short – he got cast in all of them. Holland is the first non-American Spider-Man, and he beat 7,000 others who auditioned for the role.

Before he started shooting for Spider-Man: Far From Home, he starred in a movie that required him to lose weight. To get back on track, Holland sought London-based trainer George Ashwell’s help.

Contrary to what many people think, Tom Holland did not have a lot of time to prepare for Spider-Man: Far From Home. Ashwell started working with Tom six weeks before they started filming for the Spidey movie.

While Ashwell’s primary job was to ensure that Holland filled out the skin-hugging spidey suit, his job responsibilities expanded when he was told about a scene where Tom needed to look muscular and ripped.

The goal was to have Tom Holland gain one stone (~14lbs) of muscle without any increase in body fat.

To achieve the goal, George Ashwell did something out of the box. Instead of creating a nutrition plan from scratch, Ashwell opted to work with what Holland was previously eating and adjusting it as needed.

While Holland or his trainer have never gone public with the exact daily diet plan they followed for his transformation, we have a pretty decent idea of what it looked like.

Keeping in mind Holland’s shirtless scene, Ashwell made sure each of his meals contained:

It is said that Holland was eating half of this before they started training together.

Dialing down Tom’s diet to the T was a tough task for Ashwell because of three reasons:

Tom spends a lot of time working with the stunt crews so he can step into action whenever possible. It would be safe to say he is going the Tom Cruise way with his approach.

For the six-week physique transformation program, George Ashwell created a regime that had the actor doing a combination of compound movements and functional lifts.

The goal of the six-week Tom Holland Spider-Man transformation program was to ensure:

Funny: Arnold Schwarzenegger Teaches How To Be Flexible W/ Cigar In Mouth

You cannot look or move like Spider-Man just by lifting a bunch of dumbbells. Following a wholesome approach is the only way to an athletic, strong, and shredded physique like Spidey. Tom’s training routine consists of stretching, resistance training, and cardio.

Imagine a bright sunny day in New York City. Spider-Man is out doing Spider-Man things. But then, as he stretches out his arm to shoot a web, his bicep cramps us, and he is too stiff from his previous workout to control his free fall. While this would be a great commercial for the importance of stretching (if they ever decide to make one), it would not go down well with the Marvel fans.

On the other hand, a lack of flexibility and mobility can cause your muscles to shorten and tighten. This results in the weakening of muscles and their inability to extend which, in turn, makes them more prone to injuries.

Stretching before and after a workout is non-negotiable on the Spidey workout program. Here is the stretching routine that will keep you from turning into a blob of meat:

Tip: Perform one round of the stretching circuit before and after resistance training with no rest between exercises.

Stretching is not reserved for budding Spider-Men but should be a part of every lifter’s training regimen (couch potatoes would benefit from it too).

Remember: With this training program, you are trying to look like Spider-Man and not the bodybuilder of the Marvel Universe – Thor or Strongman – Hulk.

In the Spider-Man workout routine, you will be following a five-day-a-week training routine where you will be doing three days of weight and circuit training and two days of cardio and activity training.

On Mondays, Tom Holland does a total of 13 exercises.

During the warm-up, Holland rests for 20 seconds between each set. If three reps are too easy for you, modify the rep tempo and increase your TuT (time under tension). Follow the 4:1:2:2 (four seconds on the way down, one-second hold at the bottom, and two seconds on the way up and contraction point) rep tempo to smoke your target muscle.

The main workout is a two-round circuit where you are allowed 10-25 seconds rest between exercises. Try eliminating the rest period as you progress through the program.

Check-Out: Time Under Tension – Does it Matter or Just a Myth?

In the Spider-Man workout program, you will be performing HIIT (high-intensity interval training) cardio workouts for optimal fat burn. HIIT workouts include any workout that alternates between intense bursts of activity and fixed periods of less-intense activity or even complete rest.

Despite how short a HIIT workout is, studies have shown that it can produce health benefits similar to twice as much as moderate-intensity exercise.

During warm-up, start with a brisk walk and work your way up to a light jog. You then switch to a circuit where you run at an all-out pace for a minute and then slow down for the next two minutes. Repeat this circuit seven times.

Day three of the workout program consists of eight exercises.

On Wednesday, you will be performing three rounds of the circuit. This will test your stamina and endurance.

Do not forget: The goal here is not to lift heavy but to lift with the correct form and establish a mind-muscle connection. If you are not running on fumes by end of your workout, you did not put in your 100%.

Day five of the Tom Holland Spider-Man workout program consists of functional movements and core exercises. Since the fifth-day workout only has a total of four exercises, your goal should be to limit the rest duration to less than 10 seconds between sets.

The last two days of the week are rest days for Tom Holland. Rest days do not mean that you spend your weekends Netflix and chilling. Keep your body moving on the off days. Go out for a hike or a 15-30 minute walk.

George Ashwell is a personal trainer as well as a physical therapist. He understands the importance of recovery after a grueling training session better than anyone.

Ashwell worked with Tom Holland for about 30 minutes on the treatment table after each of their training sessions. Not only did the physiotherapy sessions help Holland prepare for the role, but they also kept him in peak conditioning during filming.

Superman and Batman have one thing in common. Their bulging muscles are pretty apparent while they are undercover as Clark Kent and Bruce Wayne. On the other hand, Peter Parker is your friendly neighborhood Spider-Man who looks like every other teenager on the block.

If you are someone who wants to build insane strength, stamina, and agility while maintaining an athletic body, Tom Holland’s Spider-Man diet and workout program are for you.