"Good Vito" has his sights set on qualifying for the 2023 Olympia after receiving his IFBB Pro card. 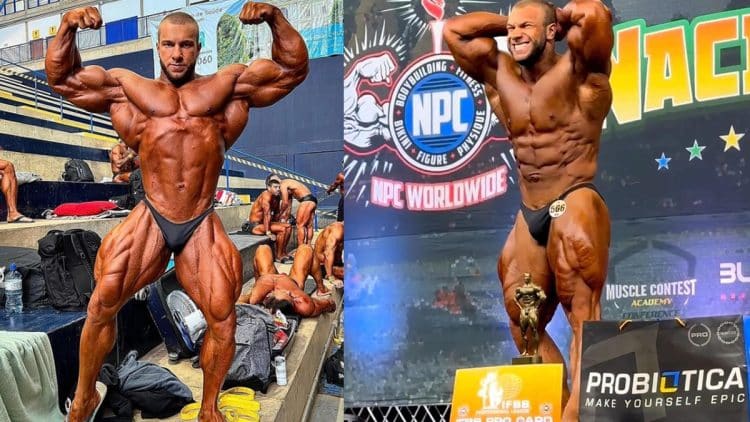 The 2022 Musclecontest International Brazil Nationals took place on Nov. 26-27 and Vitaliy Ugolnikov AKA Good Vito was crowned the newest IFBB Pro bodybuilder. Ugolnikov qualified for the show by successfully competing in the Musclecontest Fit Pira. He absolutely dominated the competition last weekend in the Superheavyweight division and overall earned his IFBB Pro card. Ugolnikov is a Russian bodybuilder that has competed in the IFBB Elite Pro League for the majority of his career. He became a social media sensation because of his exceptionally muscular physique. The wide back and huge legs are easily the best parts of Good Vito’s physique and impart a perfect V-taper and narrow waist look. However, the impeccable detail in the lower body is what makes his physique a high-caliber one.

The 25-year-old spent the entire of 2021 adding muscle mass to his already massive physique and announced a switch to the NPC in Dec. 2021. Moving to Brazil for competing in the regional shows was Ugolnikov’s first step towards becoming an IFBB Pro. Good Vito showed off his massively improved physique eight weeks out of his regional NPC show debut which presented an opportunity to compete in the Nationals and win the IFBB Pro card. The Russian Ace registered a statement win in the superheavyweight division and overall at the Musclecontest Fit Pira earlier this month and punched his ticket to the 2022 Musclecontest International Brazil Nationals.

Vitaliy Ugolnikov competed at the 2022 Musclecontest International Brazil Nationals that took place on the 26th and 27th Nov. In spite of being an amateur bodybuilding competition, the talent on display was nothing short of a professional show. Good Vito looked in phenomenal shape at the pre-judging stage. After winning in the superheavyweight class, the Russian phenom competed against the winners of every weight class for the overall title and the IFBB Pro card.

Unexpectedly, the final showdown was a competitive affair as Gustavo Bico – the winner of a lower weight class – gave Good Vito a run for the money. In spite of the huge size discrepancy, Bico gave the Russian everything he could handle. However, Ugolnikov’s detailed and massive physique prevailed in the end. A Pro card was awarded to him for winning both the superheavyweight and overall divisions.

Good Vito has his eyes set on the 2023 Mr. Olympia qualification

Ugolnikov took to his Instagram handle following the win and expressed his feelings and gratitude for becoming an IFBB Pro bodybuilder. In the caption to his post, the Russian shared his further plan of action and declared that he will attempt to qualify for the 2023 Olympia to achieve the ultimate bodybuilding goal. Courtesy of Vitaliy Ugolnikov’s personal Instagram account, you can see the post here:

“I became a pro athlete. My journey has just begun… I was able to make a new quality of my form, I was determined as possible to win and I did everything right. Next year I will qualify for the Olympia… I became a PRO athlete, kept discipline and did everything right to reach the goal. My journey is just beginning, next year I’m going to qualify for Mr. Olympia. Thank you everyone who supported me…” translated from the caption to Ugolnikov’s Instagram post.

Good Vito’s rise in the IFBB Pro league has been somewhat similar to another Eastern European competitor Michal Krizo. Many experts felt that Krizo’s conditioning looked less than optimal during the 2022 Amateur Olympia Italy, which he needs to improve for his 2022 Olympia debut. Good Vito’s conditioning also looked a bit off during the final showdown at the Musclecontest Nationals. However, 2023 Olympia is one whole year away and he has a lot of time to improve. At this point, it is unclear when he will make his Pro bodybuilding debut. Nevertheless, there are several pro shows that offer the opportunity for Olympia qualification. Furthermore, these competitions provide the athlete with the necessary experience to compete at a high level. It will be interesting to see how Vitaliy Ugolnikov fares against the top crop.