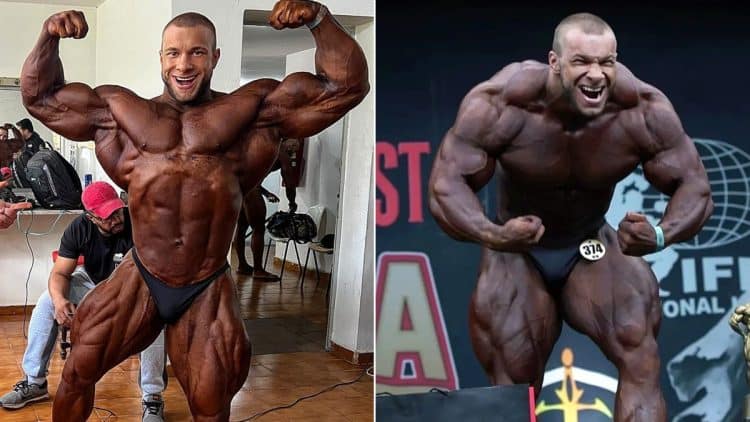 Bodybuilder ‘Good Vito,’ real name Vitaliy Ugolnikov, is one of the most popular fitness influencers who also has the ambition to become one of the best bodybuilders in the world. He got one step closer to realizing his goals after an impressive showing at the NPC show Muscle Contest Fit Pira qualifier, which took place this weekend in Brazil.

Ugolnikov spent the majority of his career competing on the IFBB Pro Elite Circuit. Fans were excited at the idea to see the promising bodybuilder make his way up the ranks and compete in the IFBB competition. Vito continued to add even more muscle mass to his already gigantic frame throughout 2021, indicating a move was inevitable. In Dec. 2021, Ugolnikov announced that he would make the highly-anticipated switch to NPC.

The budding Russian bodybuilder moved to Brazil earlier this year to compete further in the regional shows of Latin America. Ugolnikov shared a training update after his move, where he showed off his insane back muscle development while doing lat pulldowns before switching to dumbbell curls.

Good Vito shared a massive physique update in August, revealing that he tipped the scales at 275 pounds (125 kgs) in preparation for the NPC qualification show. He appeared to have made noticeable improvements in his upper body and looked to be a solid contender. He followed up with another huge physique update just eight weeks out from the Muscle Contest. It was clear Vito would leave no stone unturned in his quest to achieve his Pro card in the next few months.

‘Good Vito’ Vitaliy Ugolnikov recently made an exhilarating competitive debut in Brazil at the Muscle Contest Fit Pira contest. He took the top prize home at the regional qualifier show and has now secured the opportunity to compete in nationals and get his Pro card. Since it was a regional show, Vito stated his appearance was just a teaser and the best is yet to come.

His progress mirrors that of Men’s Open division standout Michal Krizo, who recently earned his IFBB Pro card in October at the 2022 Amateur Olympia Italy. Krizo began competing as a Pro just a few weeks later, similar to Vito’s journey in the amateurs. While both rising talents are gaining momentum, Vito appeared to have conditioning close to Krizo in his latest appearance at the 2022 EVLS Prague Pro.

Good Vito’s win at the regional qualifier event brings him a step closer to earning his Pro card at a Pro qualifier show. Once Vito gets his Pro card, he would need to win a Pro show to qualify for the 2022 Olympia. If all goes according to plan, fans will soon get to see Ugolnikov on the biggest stage in bodybuilding at Olympia.

1983 Mr. Olympia Samir Bannout recently shared his thoughts on the intense competition in the sport this season He advised Krizo to ‘torture himself’ with posing training like bodybuilding icon Frank Zane if he wants to get a top-three finish at the 2022 Olympia, scheduled for Dec. 15-18 at Planet Hollywood Resort and Casino in Las Vegas, Nevada.

Vitaliy Ugolnikov, well known as 'Good Vito,' has ambitious plans for the remainder of his bodybuilding season. In a recent...

Vitaliy Ugolnikov, popularly known as “Good Vito,” has emerged as one of the most impressive young talents in the NPC....

With aspirations to become the best bodybuilder in the world, Vitaliy Ugolnikov, popularly known as 'Good Vito' is moving to...