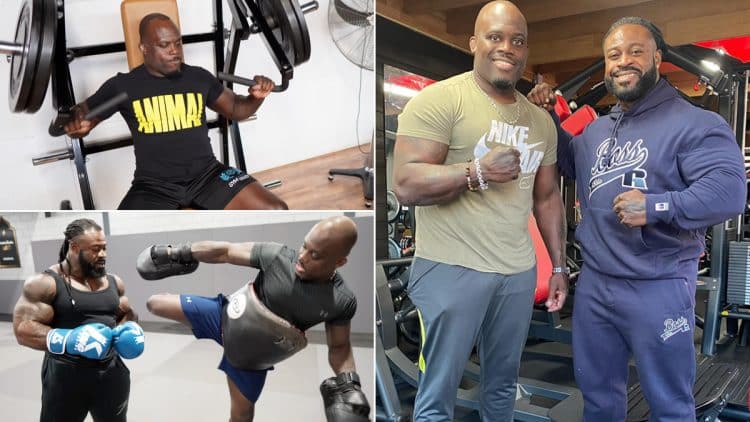 Bodybuilder William Bonac recently joined hands with MMA legend Melvin Manhoef for a training session. Bonac is a Dutch professional bodybuilder that competes in the IFBB Pro League Men’s Open division. Known for his conditioning and incredible muscle density, Bonac came close to winning the Mr. Olympia title in 2019 but finished second. He bounced back by winning the 2020 Arnold Classic but could not realize the dream of winning the Mr. Olympia throne in 2020 and 2021. Bonac turned up the heat at the 2022 Arnold Classic and secured a runner-up finish. However, a large section of the bodybuilding community argued that “The Conqueror” deserved the nod from judges instead of the winner Brandon Curry. Bonac then went on to win the 2022 Boston Pro shortly after. The win earned him a direct qualification to the 2022 Olympia.

Melvin Manhoef is a decorated kickboxer and mixed martial artist who most recently competed in Bellator Fighting Championships. At the time of recording this video, Manhoef was training to fight Olympic medalist and former three-time UFC title Challenger Yoel Romero at Bellator 285. This workout session focused on building explosive strength and muscle endurance. So without further delay, let’s take a closer look at the detailed account of this workout.

Although this was a full-body workout, the duo focused on the chest, back, and shoulders. Bonac explained that the arms get the work done anyway when you train those muscle groups. Therefore he did not include any arms exercises in the session.

Bonac instructed Manhoef to do machine decline chest press on an iso-lateral plate-loaded machine. Both handles of these machines are attached to separate weight stacks that move independently. Therefore it helps eliminate strength and muscle imbalances. Manhoef performed 12 reps of the first set with both arms. He then performed ten reps unilaterally.

Although Manhoef was training with Bonac, building muscle and size was not the primary objective of the session. Explosive striking is the base of Manhoef’s fighting style, and Bonac helped him work on his explosive strength without compromising the movement and other attributes.

“I don’t want him to get stiff. He still has to move around. All I have to do is to try to get him some strength… But still dropping some weight so he can get down to his weight class… And to be explosive. So the intensity has to be high. We have to train explosively because we can’t rely and train on the way I train like a bodybuilder—slow and feeling the muscle…” Bonac said.

Manhoef performed one more explosive set with a similar technique. He next took to another variation of this exercise where the handles were set even lower and cranked out a set at a high pace. Arm movement in these exercises is similar to arm movement when throwing a punch. So presumably, the purpose of this exercise was to improve explosive punching power.

Manhoef next performed this exercise on a plate-loaded iso-lateral machine to train the back. He performed a set of this exercise with a similar technique where he did 15 reps with both arms and performed 12 reps unilaterally with each arm.

“It’s more for him because he is a fighter the way we do the intensity but anybody can do this exercise. If you are a bodybuilder, the only thing that you have to switch and change is the pace at which you do it. So instead of going as fast as he does, you should take it slow so you can contract the muscle much better.”

“He doesn’t need to build muscle, you understand? We are just working together for strength and muscle endurance, that’s why we are doing more intense [workouts]…”

Bonac next guided Manhoef through a couple of shoulder exercises and started with the shoulder press on a selectorized machine. Manhoef cranked out a few explosive sets of this movement and moved on to the next one.

Manhoef took to this movement to work the posterior deltoids. He performed a double drop set of this exercise under Bonac’s guidance and wrapped up the weight training session.

After completing the weight training session under Bonac’s guidance, Manhoef drew the 2020 Arnold classic winner into his territory and held the pads as Bonac threw punches with 12-Oz gloves.

This video was recorded before Manhoef’s big fight and at the time of this article’s publication, Manhoef is retired from competitive MMA following a third-round KO loss to Yoel Romero. Although it is disappointing to see the 46-year-old call it a career off a loss, Manhoef has already created a lasting legacy in the sport with some great performances.

Meanwhile, Bonac’s quest to win the Olympia gold is on. The 2020 Arnold Classic winner is training with coach Chad Nicholls to prepare for the 2022 Olympia. Nicholls recently shared a physique update where Bonac looks massive and stage-ready. However, rising to the top spot is a steep uphill climb for every Open division competitor. Apart from Bonac, veterans like Brandon Curry and reigning Mr. Olympia champion Mamdouh ‘Big Ramy’ Elssbiay are still at the top of their game. Proven young contenders Nick Walker and Hunter Labrada are threatening to push the previous generation aside and occupy the rooms at the top. The addition of Andrew Jacked and Blessing Awodibu to the roster has further increased the difficulty level.

However, Bonac is leaving no stone unturned to conquer the 2022 Olympia and is making each day count with consistent efforts and hard work.

You can watch the full video below, courtesy of William Bonac’s YouTube channel: