William Bonac's coach Chad Nicholls added that "everything is on target," as he continues 2022 Mr. Olympia preparations. 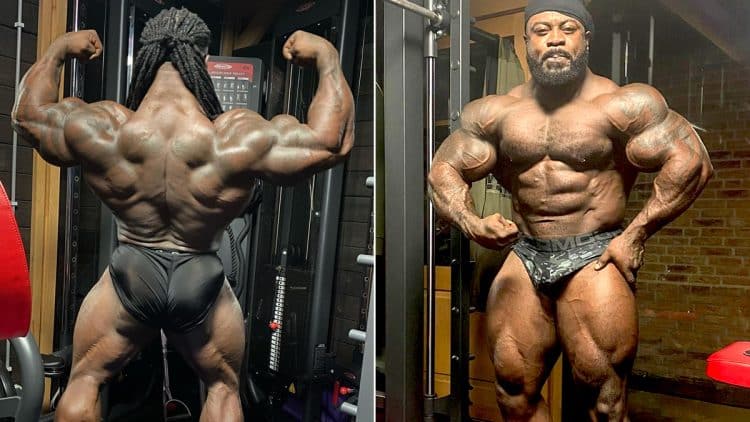 Bodybuilder William Bonac is determined to turn things around when he steps on the Olympia stage later this year. In a recent Instagram post, Chad Nicholls shared a physique update of Bonac, revealing that he is tipping the scales at a massive 264.6-pounds.

Bonac first gained popularity in the IFBB Pro League for his insane conditioning and muscle density. The Men’s Open division is home to some of the freakiest mass monsters in the world. Additionally, the Men’s Open category at Olympia is extremely competitive and Bonac found this out firsthand. In 2019, he placed runner-up to winner Brandon Curry.

Following the close defeat, Bonac regrouped to prepare for the next season and got off to a solid start with a win at the 2020 Arnold Classic. At 2020 Olympia, however, Bonac did not receive the result he was looking for and finished fifth. In 2021, “The Conqueror” earned a sixth-place finish at the 2021 Mr. Olympia.

This year, Bonac earned runner-up at the 2022 Arnold Classic, once again failing to defeat Brandon Curry. Then, a week later he brought his physique to the Boston Pro, where he won the show, and earned his invitation to Olympia this year.

In a recent post uploaded on Chad Nicholls’ Instagram account, Bonac is tipping the scales at a massive 264.6-pounds (120.3-kg) in a physique update, where he looks absolutely jacked.

“TEAM MAYHEM UPDATE: Wanted to give everyone a quick update on The Conqueror. @william_bonac We are at the end of the off season phase. Everything is right on target. Our goal was 120kg and, in this photo he is 120.3kg (264.6lbs)!

This will, without a doubt, be the best William Bonac we’ve ever seen. I know everyone always says that, but get ready for something crazy in Vegas!! #TeamMayhem”

William Bonac is working hard to deliver this winter. He revealed a five-meal bulking diet he’s implemented in order to add more muscle to his frame. During the off-season, he said he’s ‘leaving no stone unturned’ in his preparations and plans to make a statement at the show this year.

He realized that size was one of the only things holding him back and worked on improving it. In fact, the Men’s Open standout has suggested that he plans on playing the size game against reigning two-time defending Olympia champion Big Ramy.

If his recent physique update is any indication, Bonac is on track for an exciting show when he takes his talents to 2022 Olympia.

How To Do The Rolling Bridge – Tips, Variations, Alternatives, Muscles Worked