Discover what movie, TV, and singing star Zendaya eats and how she exercises to keep in great shape and stay on top of her game. 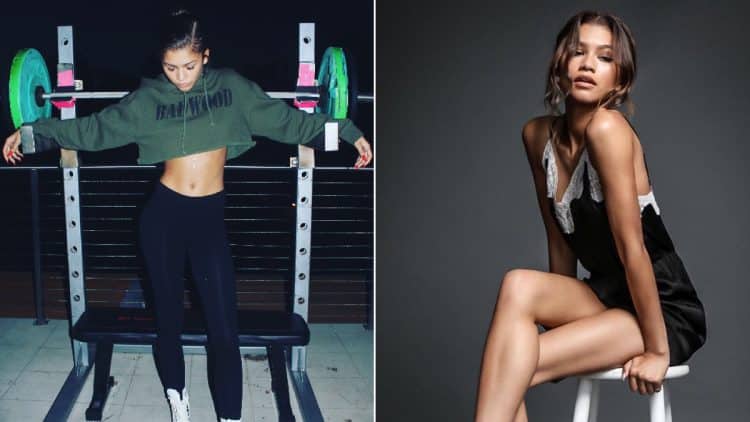 Zendaya is one of the most popular young actresses in Hollywood. Star of the hit HBO series Euphoria, she is as well known for her lithe, athletic body as her acting skill.

The multi-talented star — she’s a singer, dancer, and actress — stays active and carefully monitors what she puts into her body. Interestingly, Zendaya doesn’t believe in traditional gym workouts.

In this article, we’ll break down Zendaya’s workout and diet regimen.

Zendaya Maree Stoermer Coleman was born on Sept. 1, 1996, in Oakland, California to teachers. Her father is African-American, while her mother is of German-Scottish ancestry. Her unique name comes from the Shona word Tendai which means ‘to give thanks’.

Zendaya attended Fruitvale Elementary School in Oakland, where her mother was a teacher. From around age six, she began attending the California Shakespeare Theater, where her mother worked over the summer, and joined a hip-hop dance troupe when she was eight.

Zendaya attended Oakland School for the Arts. While there, she was cast in a number of stage productions, including several Shakespeare plays. When she was in seventh grade, her family moved to Los Angeles. She graduated from Oak Park High School in 2015.

By the time she graduated from school, Zendaya had already built the foundations of her career. She had been a fashion model for six years and had been playing the role of Rocky Blue in the Disney sitcom Shake It Up. In 2011, she released her first single, ‘Swag it Out’.

Zendaya’s first movie role was Frenemies (2012). That year she also became the youngest star to appear on Dancing With the Stars. Over the next few years, her appearances and popularity grew. Her role as Michelle in Spiderman: Homecoming (2017) took her acting career to the next level. Later that year, The Greatest Showman was released.

Zendaya does not eat meat. She made the decision to become a vegetarian at the age of nine. In an interview with People Magazine, she said the main reason for going vegetarian was her love of animals. She also admitted she doesn’t actually enjoy vegetables, making it a challenge to follow a vegetarian diet.

“I’m a vegetarian who doesn’t like vegetables too much — [which] makes it challenging! My main reason for being a vegetarian is that I’m an animal lover — definitely not because I love vegetables.”

Despite not being a fan of vegetables, Zendaya likes rice salad, which is her go-to meal during the summer. This dish combines two cups of brown rice with onion, zucchini, carrots,  and mushrooms.

Even though she avoids animal foods, Zendaya is not a vegan. That means that she can still eat dairy and eggs.

Not a cook herself, Zendaya is a big fan of takeaways. She told Harper’s Bazaar magazine:

“I don’t cook. I think I could cook… I can do anything I put my mind to, so I could cook. I just a) don’t like following directions, and I’m b) too lazy. I use Postmates to order food. I can have anything I want; that’s the beauty of ordering food. If I’m having my favorite meal, I’ll just skip right to ice cream. In fact, I get in trouble with my assistant a lot. He says I shouldn’t do that.”

Here is what a typical day’s eating looks like for Zendaya:

Zendaya has always been a very active person. Rather than doing typical gym workouts, she prefers to challenge her body with the types of activities she loves, meaning lots of dancing and choreography. In an interview with Justine magazine, she confessed:

“For me, I enjoy dancing and doing choreography, stuff like that. So, that’s how I get my exercise. Find something that’s really fun for you, whether that’s jazzercise or whatever.”

In addition to dancing, Zendaya keeps in shape with boxing practice, yoga, and circuit training. To prepare for her role in The Greatest Showman, she had to do a lot of practice on the high trapeze, which helped her build upper body strength.

Zendaya is not a fan of working out at the gym. She prefers to do her training outdoors, whether it’s at the beach, park, or in her home studio.

Zendaya moves from one exercise to the next with minimal rest between sets. Once she has gone through the complete circuit, she rests for three minutes. The actor then goes through the workout a second time. She does three sets in total for this workout.

To help her achieve her daily vitamin and mineral requirements, Zendaya takes a daily multivitamin. She also takes an omega-3 supp for its cardiovascular benefits.

Zendaya is a multi-talented actress who has established herself as one of the most bankable stars in Hollywood. She’s a great example that you don’t have to spend hours in the gym to stay in top shape. You could carve a chiseled figure by sticking to your favorite physical activities. Or you could hire a strict assistant, just like Zendaya.