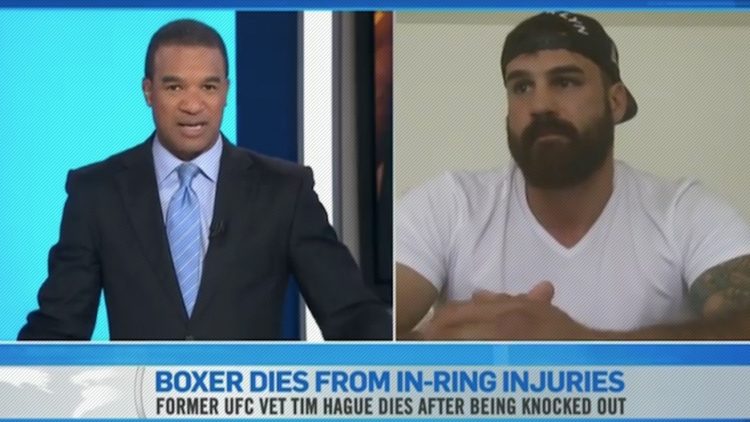 Three days after knocking out a fellow boxer who later died in hospital, Adam Braidwood posted a video to Twitter about what happened to his opponent Tim Hague, whom he called his friend.

“Everybody saw me celebrating but nobody saw me pick up Tim, carry him to the corner and tell him that I love him,” a clearly emotional Braidwood said in a video Monday evening. “I haven’t made a statement because I didn’t know what I could say or do that would help in any way.”

Rip brother you will live in my heart forever. I will fight for us both now, I know that's what you would have wanted. pic.twitter.com/H682h6rwJu

Hague died Sunday afternoon after two days in hospital in critical condition surrounded by family. He lost the KO Boxing bout against Braidwood at Edmonton’s Shaw Conference Centre by a knockout.

“Tim and I were friends,” Braidwood said. “We spoke beforehand. We just wanted to make a beautiful fight for everyone and that’s what this was all about.”

The City of Edmonton has said it will commission a third-party review looking into the match between Hague, an elementary school teacher and former UFC fighter, and Braidwood, a former football player with the Edmonton Eskimos.

Tim Hague died in hospital Sunday after a knockout blow during a boxing match Friday in Edmonton. Now, the city says a third-party review will take place. Tom Vernon reports.

In his video, Braidwood said he had already spoken to Hague’s family to offer his condolences and also offered gratitiude for people who have sent him messages of support following the tragic aftermath of Friday’s fight.

“I just want everybody to help Tim’s family, that’s what this should really be about,” Braidwood said. “Instead of leaving a comment, contact his family. I know they set up an account. Help them any way that you can and… try to leave it at that.”

EXCLUSIVE: Professional Boxer Adam Braidwood talks candidly about Tim Hague who passed away Sunday night.. Hague passed away from injuries he suffered after getting knocked out by Braidwood.

Hague’s family has set up a GoFundMe account to raise money for funeral expenses and other related costs. As of 10 p.m. on Monday, more than $26,000 had been donated.

Hague, who was 34, leaves behind a nine-year-old son, Brady, who friends say was a huge source of motivation for him. Hague, who was originally from Boyle, Alta., was also a coach at the UFC Gym in Sherwood Park.

Braidwood played in the Canadian Football League from 2006 to 2010. The Edmonton Eskimos released him in the spring of 2011.