As a result of their dominant performances on the first day, Garard and O'Brien are currently in the lead of the pack. 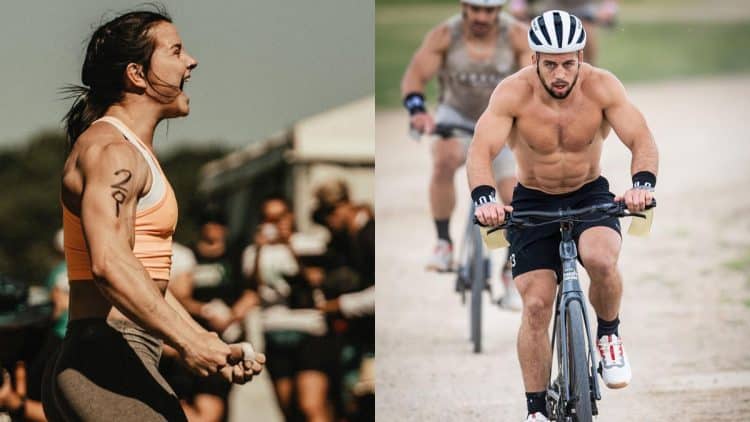 The first day of the 2022 NOBULL CrossFit Games is underway, and the competition will continue until August 7th, 2022. The 40 greatest Individuals and 38 Teams have gathered at the Alliant Energy Center in Madison, Wisconsin, to determine who the Fittest On Earth® are this year. All eyes are pointed towards Tia-Clair Toomey and Justin Medeiros, as they won the 2021 CrossFit Games in their respective women’s and men’s divisions.

On day one of the 2022 NOBULL CrossFit Games, four events were supposed to take place, but some were rescheduled for tomorrow. Two workouts were announced prior to the Games, while two were revealed once the athletes were on the field. As they couldn’t prepare beforehand for the two unknown events, a lot of athletes struggled to perform well. This resulted in some very interesting duels and unexpected placings. The 2022 NOBULL CrossFit Games also had one withdrawal on day one, as Emily Rolfe couldn’t make it.

Women’s Division “Shuttle To Overhead A”

Despite never winning a CrossFit Games event in the past years, Haley Adams already has two victories in this competition. Tia-Clair Toomey also displayed greatness in this event, as her second-place finish in this event got her back into title contention. Gabriela Migała also displayed some swiftness, having finished all the runs in third-fastest time.

Men’s Division “Shuttle To Overhead A”

Uldis Upenieks gave it his all on the runs and secured 100 points. However, Ricky Garard managed to secure a second-place finish, while also retaining some strength for the jerk portion of the event. Garard could have probably turned his pace up, but he approached the event with very smart tactics. Saxon Panchik almost overtook Garard, but fell short by less than half a second.

Women’s Division “Shuttle To Overhead B”

Tia-Clair Toomey used the reschedule of this event to her favour and got back to her best, as day one of the 2022 NOBULL CrossFit Games did not go according to her plans. Tia-Clair made the 2016 Summer Olympics in weightlifting, so she is obviously extremely good in performing jerks. Danielle Brandon got another top three finish, and put herself in a very nice position for the remainder of the competition. Mal O’Brien did not let Tia-Clair gain too much points on her, as she finished in third place.

Men’s Division “Shuttle To Overhead B”

Jeffrey Adler managed to claim a win after a horrendous performance in the Elizabeth Elevated. He won the event with a two repetition advantage, as Saxon Panchik got the closest to him. Medeiros, Garard, and Hopper all completed 16 jerks, but the fastest time on the runs served as a tiebreaker.

While the Toes-to-Bar and Chest-to-Bar Pull-Ups are standard exercises for the majority of competitors, the 10-mile bike run really made it unpredictable. The bike course consisted of many sections, as the competitors drove over grass, gravel, and concrete roads.

Some athletes were suspected to have missed one lap on the bike. As a result, there is the possibility that rankings may change after they are reviewed. Should that happen, we will update the article accordingly.

Spencer Panchik and Lazar Đukić held together throughout the entire event, but Panchik had just a bit more energy in the race’s final stages. That being said, it seemed like they missed one lap on the bike, since their advantage over the rest of the field looked implausible. Ricky Garard also beat Jonne Koski to a third-place finish by less than two seconds.

Several athletes did not complete the final lap on the bike ride, so the rankings after the review are quite different. Spencer Panchik and Lazar Đukić were comfortably in the top five throughout the entire race. However, due to them missing a lap, they suffered a time penalty which significantly lowered their placings.

The workout includes pegboards, jump ropes, pistols, and handstand walks for three rounds. Only the best competitors from each round can go through to the next one.

The second workout of the 2022 NOBULL CrossFit Games brought some very unexpected results, as Tia-Clair Toomey did not even qualify for the semifinal round. She made a mistake while performing unbroken single-unders, which ultimately cost her some very valuable points.

No one was able to complete the final sequence, but Danielle Brandon performed the most reps out of the bunch. Rebecca Fuselier was very close to Brandon, but could not overtake her before the time ran out. The 17-year-old Emma Lawson finished in a massive third place, putting her on top of the overall standings.

The men’s division also featured some very tense moments, as any mistake could prevent the athletes from qualifying for the next stage. However, unlike the women, two men did manage to finish the final sequence. Nick Mathew was the first one to do so, since double-under crossovers gave him a significant advantage. Guilherme Malheiros also managed to finish the course just before the time ran out.

Justin Medeiros finished in third place once again, which shows how consistent he is. However, he could have beaten Guilherme if he managed to balance himself properly on the handstand walk.

Arielle Loewen, who claimed her spot at the 2022 NOBULL CrossFit Games by winning the Last Chance Qualifier, now also won her first CrossFit Games event. Kara Saunders almost won this workout, but Loewen managed to overtake her in the final heat. Mallory O’Brien’s third place finish from this event moved her up to first-place overall at the end of day one.

Patrick Vellner won the fourth event with the most dominant and electrifying performance of the day. Vellner is trying to secure his fifth CrossFit Games podium finish, as he already got two silver and two bronze medals. There is no doubt that his previous experience in gymnastics gave him an advantage over his competitors, since no one else was able to successfully do dips on the parallel bar like he did.

Björgvin Karl Guðmundsson also closed off his amazing first day of 2022 NOBULL CrossFit games with an impressive performance and this second-place finish earned him a lot of valuable points. A surprise third-place finish by Colten Mertens in day one’s final event astonished everyone.

Events two and three for Teams division have been moved from day one to day two because of bad weather.

CrossFit Milford came out of nowhere to claim their first event victory in the 2022 NOBULL CrossFit Games. They barely beat CrossFit Invictus, who placed second, and CrossFit Mayhem Freedom who finished in third place. Immediately after finishing this event, the teams had to complete another workout.

CrossFit Mayhem Freedom had a major slip up on this event, as they did not even finish in the top 10. CrossFit Oslo Navy Blue immediately saw the opportunity of overtaking Froning and his crew, so the team from Norway gave it their all and won the event. CrossFit Selwyn closely followed them across the finish line, while CrossFit Reykjavik finally displayed their pover.

Push Bob down the field

Then, 3 rounds for time:

After the final toes-to-bar, push Bob to finish

The Team’s lineup was divided into two heats for this event. As scheduled, heat one completed its workout, while heat two opened up two hours later due to bad weather. Regardless of the long and unplanned delay, the teams in heat two performed significantly better than the teams in heat one. In fact, the winners of heat one, 8th Day CrossFit Black, finished in 19th place overall.

As a result of heat two being more dominant, we saw an incredible race between the teams. CrossFit Oslo Navy Blue won this workout overall, while Mayhem Freedom beat Mayhem Independence by just six-tenths of a second. All three of these teams competed against each other in heat two.

*Two members hold the Worm while the others perform dips and pegboard ascents.

Only three out of the 38 teams finished this workout, as the gymnastic tasks turned out to be too hard for many athletes. Team 8th Day CrossFit Black had the fastest time out of the three, and Mayhem Freedom took second place at the end of the event after being led by Rich Froning.

We were also able to see one of the favorites for the 2022 NOBULL CrossFit Games, CrossFit Reykjavik, severely underperform. It seemed like Lauren Fisher suffered a shoulder injury which prevented her from completing the dips on the parallel bar.

The Individual and Teams divisions were not supposed to compete tomorrow at the 2022 CrossFit Games, but some of their events have been unexpectedly rescheduled. So, neither of the divisions will get an entire day off until the competition ends on Sunday, August 7th.