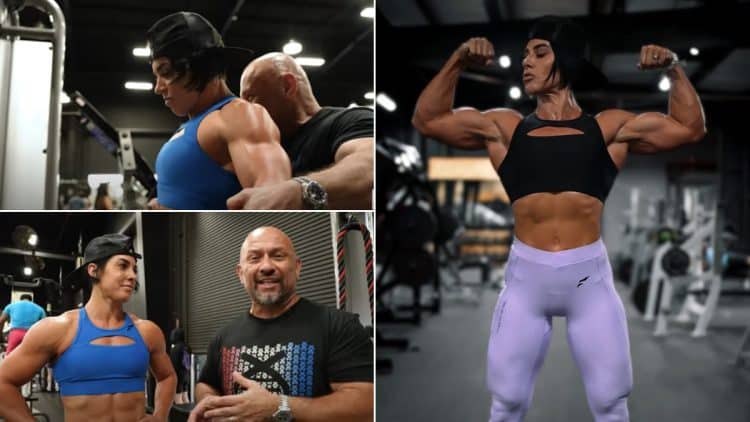 Dana Linn Bailey reached the top of the sport during her time competing as a Women’s Physique competitor. In a recent video, Linn got busy in retirement with a brutal FST-7 shoulder workout with bodybuilding coach Hany Rambod.

Bailey’s impressive conditioning guided her to success in the IFBB Pro League. In 2013, she managed to capture the prestigious Olympia title in the Women’s Physique division. The bodybuilder returned to 2014 Olympia to defend her title but narrowly lost it after coming in second to Juliana Malacarne.

Last week, Dana exercised alongside four-time Mr. Olympia Jay Cutler. The pair of bodybuilders teamed up for a taxing chest and triceps workout. Even in retirement, Dana and Jay approach their training sessions as they did during their prime years in the spotlight.

Rambod’s training methods are methodical. He and Dana focused on performing a series of exercises and complimented the time under tension with static holds after each movement. Specifically, FST-7 training stands for Fascia Stretch Training. The ‘7’ represents the number of sets typically practiced during this type of training. In most circumstances, the ‘7’ sets are performed as the final exercise to target a particular body part.

Find a full list of the workouts used in Rambod’s video below:

Rambod helps Dana Linn Bailey with static holds before moving on to the next, heavier set.

“Out here, we’re going to focus more on that outer lateral head. So, we can go a little bit wider. So, squeeze your shoulders and let’s see. Move those lats out.” Rambod explained. “So again, for those who don’t know. I use a lot of static holds and I also use a lot of flex sets. What I’m trying to do is increase blood flow to the area. More time under tension. With more time under tension you’re going to get more growth.”

After performing a few sets, Rambod helps Dana practice static holds again to increase blood flow to the areas activated during this workout.

“She doesn’t make the mistake that most athletes do, which is use your traps. That’s why she’s actually more balanced because she’s not using a lot of traps. She’s keeping her chest up and she’s really focusing on her delt because most athletes will use too much weight and then they’ll get these gigantic traps which will actually make you look more narrow. Rambod said.

The decorated coach praises Bailey for keeping her chest flared up during dumbbell lateral raises.

“Again, she’s doing a great job of keeping her chest up and we’re just getting her to pull up just a little more than usual and I think that’s going to come out to a really round and full delt.” Rambod added.

During the last dumbbell exercise, Rambod stressed the importance of muscle control, especially during the ‘eccentric’ motion.

“We’re working on muscle control. So what are we doing? We want to be able to control the eccentric as well. As we’re doing static holds, she’s holding the opposite side, and then being able to do one side, she completes it, and then switches over to the other. Again, a whole different kind of strong.”

Behind The Back Cable One Arm Lateral Raise

Rambod helps Dana through the workout by placing his hand at varying angles for her to reach while using the cable machine.

After a demanding first set, Rambod assists Dana with some more static holds.

Cable Bent Over One Arm Flyes

Rambod believes the key to cable bent over one arm flyes is ensuring a proper stretch during the movement. He added that keeping the shoulders tight will result in a better stretch.

“The key is getting her to stretch more because we really like the range of motion even better than traditional bent over lateral raises. That’s why I try to keep her shoulders upright, so she gets a really good stretch. Then, we pull all the way out.”

Before finishing up for the day with a final cable exercise, Rambod helps Dana practice her static holds one last time.

“We just wrapped up with shoulders with 2013 Women’s Physique Olympia winner Dana Linn Bailey. It was a great shoulder workout. How do you feel?” Rambod asked.

“We need to do this more often. I want you to train me in every single body part.” Linn laughs.

Rambod was left impressed by Dana’s strength considering she stepped away from the sport competitively almost ten years ago.

“It was really great because she’s super strong. She’s got the endurance of a pure champion thoroughbred. She always looks like this even though she hasn’t stepped on stage in so many years. Rambod said. “That’s the difference between part time bodybuilders compared to someone who really lives it.”

Rambod instructed Bailey to perform two sets of standing reverse cable flyes in order to stretch the muscles in their fully extended position.

I got a better stretch…really focusing on keeping that elbow straight.

Despite retiring from the sport, Dana’s motivation hasn’t waned in the slightest. She has made a dedicated effort to grow her YouTube channel, which currently has over 500,000 subscribers, in addition to her two million followers on Instagram. Bailey routinely shares workout videos online and turned heads after getting an intense arm pump in while training alongside women’s bodybuilder Kristen Nun.

RELATED: Top 5 Shoulder Training Mistakes And How To Correct Them

Given Rambod’s extensive knowledge in regard to working out, Dana Linn Bailey left the training session eager to learn more from the credentialed coach. If her recent workout with Rambod showed anything, it’s that Dana still has plenty of motivation to train as if she still competes at the highest level.