Rongo Keene outperformed some of the biggest names of Strongman to get his first International win. 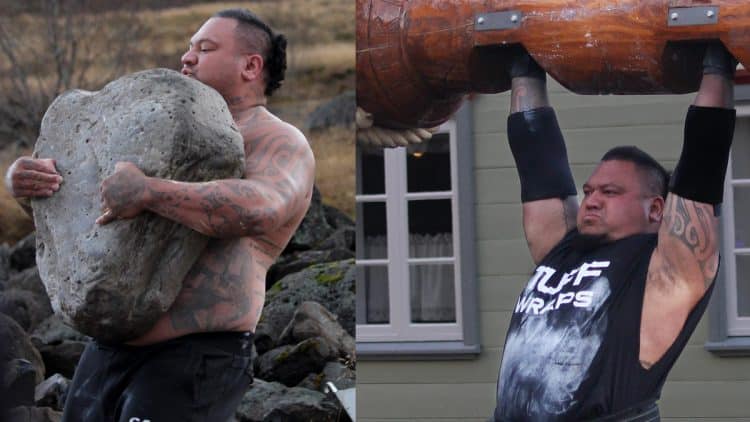 The 2022 Magnus Ver Magnusson Strongman Classic took place on November 18-20, in Reykjavik, Iceland. Organized and named by the 4x World’s Strongest Man, Magnus managed to gather some of the best Strongman athletes currently competing. Magnus, however, also recruited some less experienced athletes who are likely to be the future of the sport. One of those individuals was Rongo Keene, who won the 2022 Magnus Ver Magnusson Strongman Classic.

Despite competing against some athletes who made the finals and podiums at World’s Strongest Man competitions, Rongo Keene still managed to land his first International Strongman title. Most impressively, Rongo beat Maxime Boudreault and Eythór Ingólfsson Melsted, who got second and third place respectively.

The first event of the 2022 Magnus Ver Magnusson Strongman Classic was the Rock Overhead Press. They attempted to lift six stones, which ranged in weight from 100 to 150 kilograms (220 to 330 pounds).

There was a three-way tie for first place, as Rongo, Melsted, and Finerty all lifted the 138-kilogram stone. In addition, almost every athlete on the roster tied with someone else for one of the positions.

Very similar to the Atlas Stone event, the athletes had to lift four Natural Stones to their platforms. The stone’s weight ranged from 130 to 185 kilograms (286 to 408 pounds).

Kristján Jón Haraldsson was significantly faster than any other athlete, as he was the only one to finish all four stones in less than 30 seconds. Melsted was the second fastest, while Maxime Boudreault settled for third.

The Hammer Throw was the final event of day one. A bit unusual, but also traditional, it required athletes to throw the 21-kilogram (46.3-pound) hammer as far as possible.

Unusual events are known to make competitions fun, as anyone could win them. So, Torfason proved to have the best qualities for this event, which saw him almost get the 10-meter mark. Vilius Jokužys got second with a throw of 9.22 meters, while Maxime once again got third, having thrown just 0.08 meters less than Vilius.

What better way to start the second day of the 2022 Magnus Ver Magnusson Strongman Classic than with the Husafell Stone Carry. The traditional Husafell Stone, weighing 186 kilograms (410 pounds), had to be carried around in a circle, with the aim being to cover the most distance. One circle around the rocks was 35 meters long.

Only two men were able to complete two revolutions and cover at least 70 meters, with Vilius Jokužys being the best. Maxime Boudreault also got second, while Colton Sloan got third.

The stones were once again a part of an event, but this time in a medley form. A total of four stones, weighing 100 to 145 kilograms (220 to 319.7 pounds), were placed ahead of the athletes, who then had to pick them off the ground and lift them to one of their shoulders.

Rongo Keene was the fastest to lift all four stones, having beaten Melsted by just two seconds. The Canadian representative, Maxime Boudreault once again found himself in a top 3 position.

The Farmer’s Walk did not actually feature the regular implements. Instead, the competitors had to carry two stones which were different in weight. One stone weighed 137 kilograms (302 pounds), while the other one came out to 142 kilograms (312 pounds). The goal was to cover as much distance as possible.

Mika Törrö got his first event win with a mind-blowing carry of 35.88 meters. Rongo Keene was also amazing, as his distance of 34.77 meters meant that he was the only other person to exceed 30 meters. Torfason got third.

The penultimate event of the 2022 Magnus Ver Magnusson Strongman Classic was the Axle Deadlift For Reps. The weight of 325 kilograms (716.6 pounds) was loaded onto the bar, while the time cap was 75 seconds.

No one was able to come close to Melsted who performed seven repetitions in order to get maximum points. Rongo, Sloan, Ujarak, and Motal all shared second place with five reps each.

The final and deciding event of the 2022 Magnus Ver Magnusson Strongman Classic was the Log Press Medley. Four logs weighing between 110 and 165 kilograms (242 and 363.8 pounds) had to be completed consecutively and as fast as possible.

Known for his incredible shoulder strength, Maxime Boudreault did not find this event too difficult to win. He was followed by Melsted, while the overall winner, Rongo Keene, secured the gold medal with a third-place finish in this event

Related: Nick Best Announces His Decision To Retire From Strongman Competitions At The Age Of 54

Rongo Keene has so far taken part in 10 National and International competitions. Apart from this win, he only won the 2016 Australia’s Strongest Man. Rongo also competed at the 2018 World’s Strongest Man contest, but finished last in his qualifying group. However, the situation is looking better than ever for him, considering the effort it took to win the 2022 Magnus Ver Magnusson Strongman Classic.