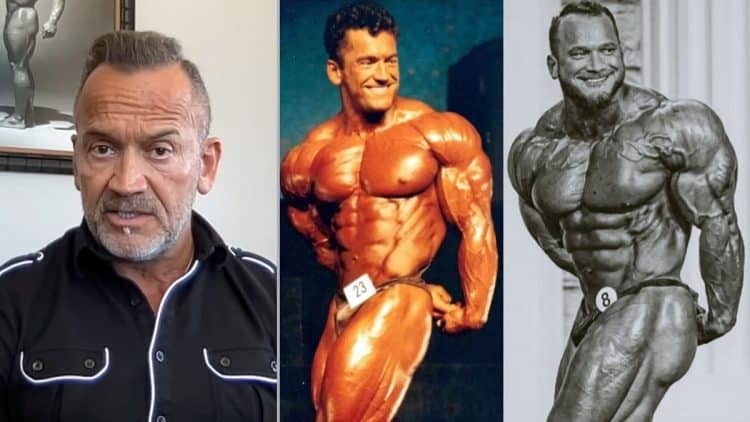 Lee Labrada understands the art of posing and how it can accentuate the qualities of an athlete’s physique. Speaking with Terrence Ruffin, Labrada shared his posing inspirations and how the art form is almost extinct in the Men’s Open division today.

Throughout his career, Labrada proved himself against the toughest contenders the sport had to offer like eight-time Mr. Olympia Lee Haney, Shawn Ray, and Rich Gaspari. While he achieved many accomplishments, Labrada could not procure a Sandow trophy. Nevertheless, his dedication and love for bodybuilding is evident when he discusses the sport.

The last time fans heard from Labrada he opened up about staying fit at 62 as well as his son Hunter Labrada’s budding IFBB career. According to Labrada, Hunter plans to step away from the sport after winning a Mr. Olympia title.

In 2021, Lee Labrada connected with Classic Physique standout Terrence Ruffin. Given Lee’s posing expertise, he offered ‘Ruff Diesel’ some advice. Ruffin recently won the 2022 Arnold Classic and continues to demonstrate an artistic level of posing. In their latest discussion, Labrada shared some thoughts on how posing has changed from his era to now.

Labrada listed a few bodybuilders who influenced his style of posing.

“So, some of my early influencers on posing were Ed Corney and Mohamed Makkawy. I would also say that Frank Zane and even Samir Bannout influenced my posing early on also. I did develop my own style, but I’ve found it helpful to watch videos of some of these superstars at the time and to learn — to do the movements and the poses and such that they did.”

After Lee watched Ed Corney guest pose, he saw him as a pioneer for his ability to utilize the transitions between poses.

“I remember seeing Ed Corney live in person when I was 17 years old — In Florida he was guest posing and it was just amazing because it looked to me like a statue in motion. A lot of the bodybuilders back then were very good at hitting what I call the static poses. They were not as good in the transitions,” Lee Labrada said.

Unlike other bodybuilders who fumbled through poses, Labrada mentioned that Ed Corney’s flow made the presentation more appealing.

“He was one of my early influences and I realized that I didn’t have to go up there and hit 12 or 16 static poses and just kind of fumble from one pose to the other. The mesmerizing presentation came from doing the transitions.”

Lee Labrada said it wasn’t until the 70s that bodybuilders started paying attention to transitions between poses. He specified that the ultimate goal is to hide imperfections when a bodybuilder is on stage.

“So, in the 70s the bodybuilders started to actually pay attention to the transitions. I think that Ed Corney was the biggest pioneer of that era. A trendsetter. And I think because of what he was doing he influenced a lot of bodybuilders in that era,” Labrada said. “One of your goals as a poser is to hide your flaws as best as you can.”

Labrada believes Men’s Open division ‘has no incentive to pose,’ Judging criteria is partially to blame

Once Dorian Yates took over the Men’s Open division, Labrada explained that the sport went in the direction of ‘mass-building’ instead of bodybuilding.

“As much as I believe that posing was refined through the 70s until the 80s, I do believe that it reached a pinnacle in the late 80s and early 90s before the Dorian Yates era. Then, bodybuilding seemed to go in the direction of what I call mass-building, not so much bodybuilding.

“A lot of that stuff [symmetry, balance, and proportions] started getting tossed to the side. And I think that we’re still in danger of some of that in the Men’s Open bodybuilding today. Again, it comes down to the judging criteria. I think the bodybuilders are going to do whatever they are awarded for,” says Labrada.

Labrada shared that there’s no incentive to pose in the Men’s Open and it looks like ‘tanks clunking’ into each other with very few transitions.

“For the longest time they’ve not been rewarded for having excellent display. They are awarded for doing the mandatory poses which come in the prejudging and the like and it’s pretty much set on from that point that posing is an afterthought.”

“If there’s no incentive to pose well, then you’re going to be seeing a lot of what you’ve been seeing the last few years. They look like tanks basically clunking between static pose and static pose with very little on the transition.”

Before ending the discussion, Labrada and Terrence Ruffin agreed that Kai Greene was an outstanding poser in the modern era.

“I think that’s the way it should be. I don’t think everyone should pose the same. Logan is a great poser, Logan Franklin, but the way me and him pose are very much different but I think it brings some originality and fun into it when there are different posers doing different things,” Terrence Ruffin said.

The Classic Physique division has arguably never been more popular with plenty of excellent posers. In addition to Ruffin, three-time Classic Physique O winner Chris Bumstead is waiting in the wings as he aims to capture his fourth straight title. Other rising threats have thrown their name in the hat this year like Urs Kalecinski and Brazil’s Ramon Rocha Queiroz.

Without a doubt, Labrada has seen the sport change a lot since his time on stage. Looking ahead, Lee and Ruffin are unsure if posing in the Men’s Open division will ever return to what it once was.