Andy Ruiz Jr. KO’s Anthony Joshua In The Seventh Round! 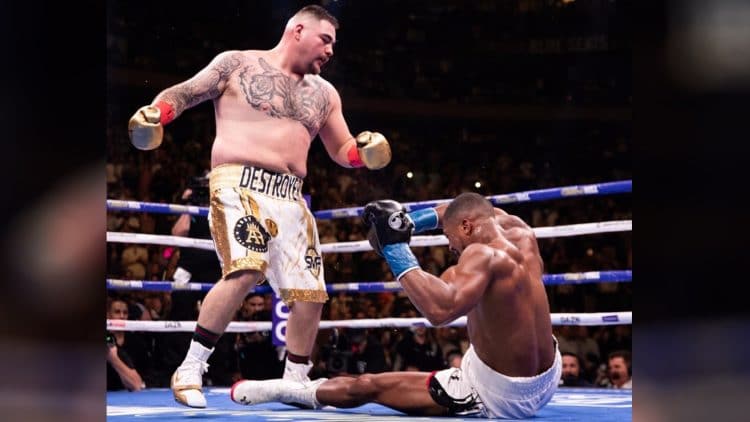 Andy Ruiz Jr. shocked the world, turning the lights out on dangerous heavyweight knockout artist Anthony Joshua in the seventh round! Interestingly, Joshua was a major -2500 favorite, but an underdog taught him a lesson and won the WBA, IBG, WBO and IBO heavyweight titles!

We haven’t seen much action in the first two rounds. Both fighters started cautiously.

The challenger was hit heavily by a fabulous left hook from Joshua in the third round. Yet, Ruiz somehow recovered and knocked his opponent down two times! The brutal counterpunch nearly finished the champ, but he somehow got up. Ruiz tried to maul him, but Joshua survived.

Joshua didn’t land a significant strike in round 4, Ruiz was trying to finish him all the time. During the next two frames, Andy Ruiz Jr. kept the same strategy. Joshua ate many punches to his head and mid-section.

The seventh round brought a major surprise. Ruiz Jr. scored a fast knockdown. Joshua got up with a bloody nose. But after a major flurry of punches in the center, Joshua was knocked down again.

Joshua was back on his feet but he stumbled to the corner, so the referee waved off the contest. This was a massive victory for Andy Ruiz Jr.

Check out the highlight reel KO below.

WE HAVE A FIGHT ON OUR HANDS LADIES AND GENTLEMEN!#JoshuaRuiz pic.twitter.com/Kf4zJBebne

WBC heavyweight champion Tyson Fury has one of the most inspirational stories in all of sports. That inspiration just continues...

Anthony Joshua Adds Another Belt To His Collection Anthony Joshua is now a three-belt world heavyweight boxing champion and he did...

Anthony Joshua Interested In Zuffa Boxing The UFC is reportedly making an audacious bid to sign a mega multi-fight deal...

Francis Ngannou Calls Out Brock Lesnar, ‘Give Me That F__king Fight’