After a mysterious heart condition kept Antoine Vaillant from competing at shows, he still remains committed to the sport: "I never said I would stop bodybuilding or training" 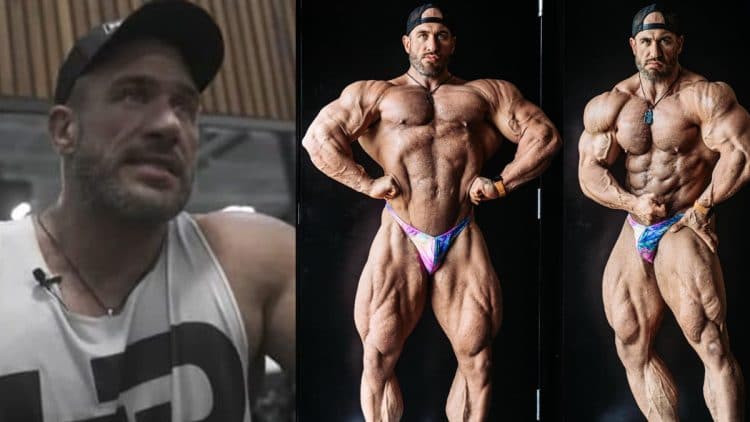 Popular Men’s Open competitor Antoine Vaillant revealed that a heart issue prevented him from competing in the sport of bodybuilding earlier this year. In a recent video, Vaillant opened up about his current health and the decision to continue training as a bodybuilder.

Vaillant last competed at 2020 Mr. Olympia, a competition that saw him earn 14th place on his first attempt. While he might have had less experience than many of his peers, Vaillant brought an incredibly balanced physique to the most prestigious event of the year, proving he could hang with elite-level talent. Following his impressive Olympia showing, Vaillant began to celebrate in light of his success on the Pro circuit.

Last year, Vaillant announced that an unknown heart condition was preventing him from competing and training as a bodybuilder. He underwent a Calcium Score test, a heart examination that checked his coronary arteries. Medical professionals discovered that he was in the one percentile — meaning for his age and gender, 99 percent of people had better results than him.

The sport has seen a staggering number of bodybuilders die lately and many are seemingly due to heart problems. Before 2021 could end, Shawn Rhoden, a former Mr. Olympia winner, was found dead at 46 from a heart attack. George Peterson tragically passed away in his hotel room from heart issues before getting to compete at 2021 Mr. Olympia. Then, in March of this year, Cedric McMillan, 44, was the latest competitor to die from heart complications. For Vaillant, this concerning trend no doubt played a role in his desire to keep up with his heart health.

In a recent YouTube video, the Canadian native says he ‘healthier for sure’ and that his heart health is ‘stabilized’ despite all of the ‘party drugs’ he used in the past.

“Yeah, I am healthier for sure. Of course, I’m healthy. The damage that was done to it [the heart] from the past and the causes, a combination of things but for sure, a long time having high blood pressure was probably like the main cause. I’ve controlled that now with the help of Dr. Glen Jackson.

When I did all the party drugs with the problems I had in the past, that didn’t help but yeah, I’m doing blood work every four weeks and everything is stabilized and checked out and if something is like what happened with the blood work, I make choices and decisions accordingly right?” Antoine Vaillant explained.

After having his heart checked recently, Antoine revealed that no blockages were found, though a ‘little plaque’ was detected in his arteries. It appeared that Antoine’s bodybuilding career was in jeopardy due to his health, but he has made it clear that his intention was never to step away from the sport or stop training.

“So yeah, people will still talk and they think I’m retired and stop or whatever. I kind of played with it a little bit but no I never said I was.

I never said I would stop bodybuilding or training. If they watch my whole videos, actually playing that I did further testing, there’s no blockages so there is a little plaque but at my age, it happens you know.”

The ordeal has been unnerving for the Pro, but he appreciated the fact that his plight likely resulted in other athletes getting their heart health checked.

“As far as being in the one percent for the population, one percent out of 100, still like… it’s not that uncommon right? But all those numbers at first scared me and back then, it was kind of like a hot topic, like oh my god, people are dying because they don’t check their health.

I checked my health, and I said ‘look, I found something, and you guys should check it too.’ I’ve had my own problems with addiction that I could not tell anyone online and do it on my own with my support here. But I wanted to tell people, why? To help people.”

According to Vaillant, everybody’s time will come eventually. He stressed that if his health wasn’t in good standing, he would ‘make the right decision’ by correcting the problem.

“We’re all going to die someday listen.” Antoine added. “A lot of friends got checked out because of me. Everybody can hate all they want, I’m doing good. Vaillant added. I’m good with that. Everything is cool, if something wasn’t, I’d be the first to accept and make the right decision.”

For the last several years, especially after his 2020 Olympia performance, Vaillant found himself struggling to deal with substance abuse and addiction. Like many people who find themselves physically dependent on chemicals, Vaillant’s drug use was recreational and occasional at the beginning. In an effort to combat the growing problem, the 34-year-old attended rehab facilities four times.

Despite his troubled past, Vaillant has no intentions of slowing down in the gym and enjoys training as a bodybuilder. Vaillant ensured his fans that his heart is in good health and that he doesn’t plan to retire from the sport in the near future.