Follow in the footsteps of legendary bodybuilder Arnold Schwarzenegger and build a chest you can truly be proud of! 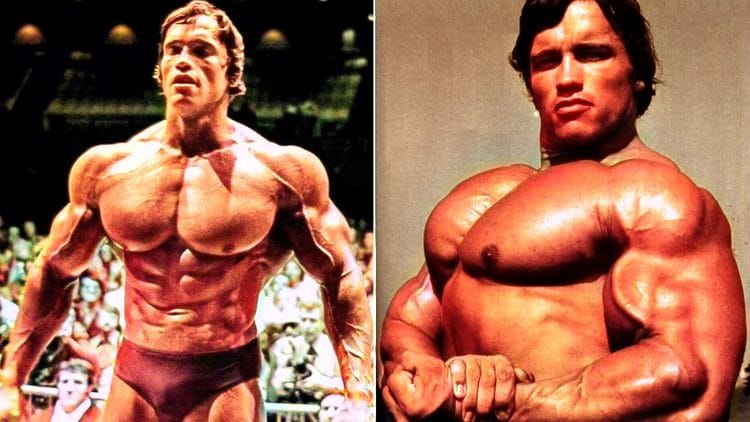 Arnold Schwarzenegger is and will probably always be the most famous bodybuilder in history. With four Mr. Universe titles and seven Mr. Olympia wins, no other bodybuilder has had more of an impact in the sport of bodybuilding. 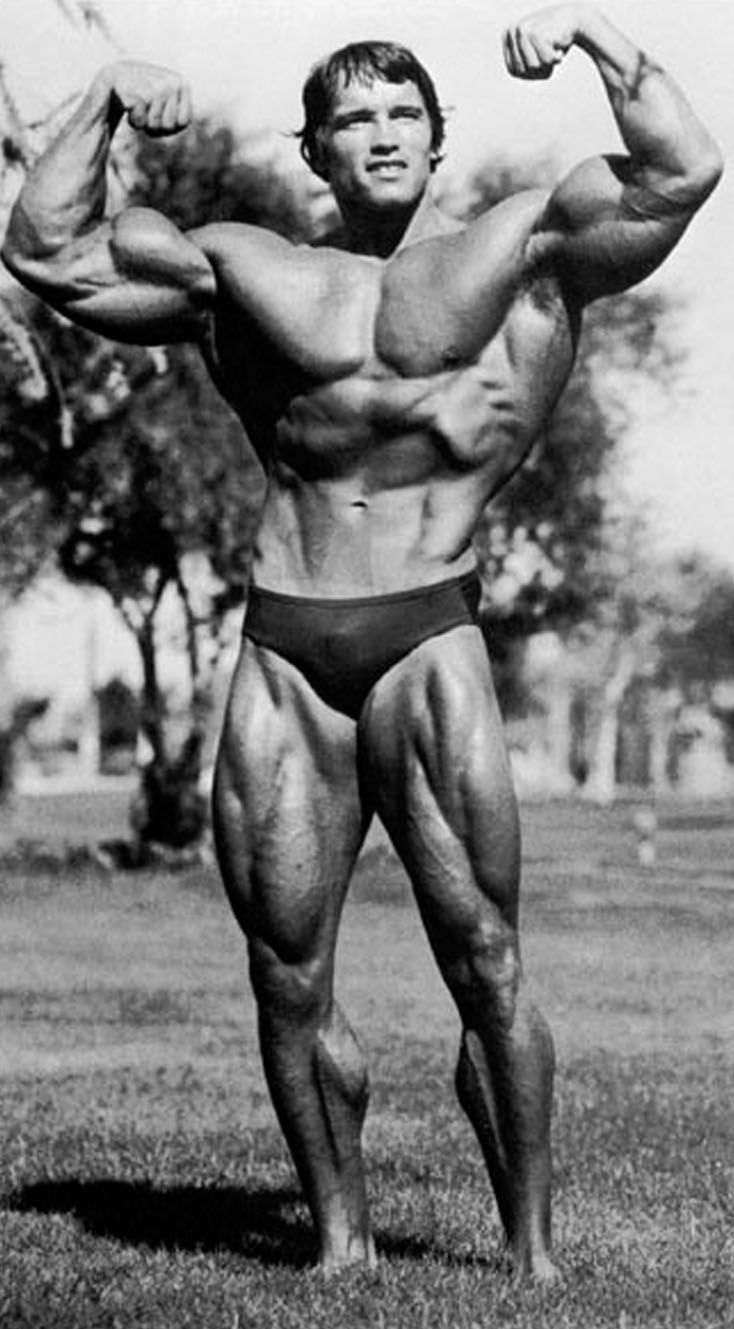 Many past and current champions name Arnold as the inspiration that launched their own bodybuilding careers. And, with the competitions he hosts, such as the Arnold Classic, Schwarzenegger has put a lot back into the sport he clearly loves.

Arnie has also written several books and hundreds of articles in which he shares his training advice. After many decades in the sport, when Arnold speaks, bodybuilders listen – even if his statements sometimes ruffle a few feathers!

Because of his movies and political career, even non-bodybuilders know who Schwarzenegger is – he’s a global phenomenon. They might not be aware of his past sporting achievements. After all, he was in his bodybuilding prime almost 50 years ago. That said, most people know that he’s the guy with the massive arms and strong, Austrian accent.

Despite being in his 70s, Arnie is still training. However, his workouts are very different from when he was a champion bodybuilder. Now his focus is more on health and longevity and less on building massive muscles. That said, he’s still in great shape and is more muscular than many men half his age. 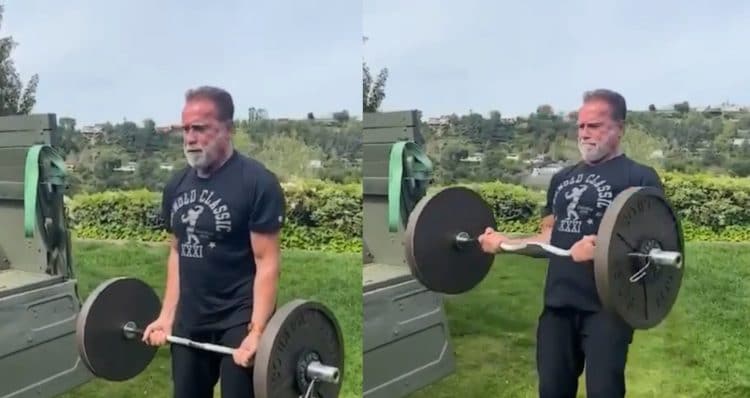 During his competitive heyday, Arnold Schwarzenegger was the total package, with classic aesthetics, massive muscles, and excellent definition. He was also a world-class poser. But, his stand-out body parts were always his chest and biceps.

In this article, we reveal how Arnold Schwarzenegger built his famous chest.

Arnold Schwarzenegger’s chest workout often changed. Like most bodybuilders, he trained instinctively and liked to vary his workout based on how he felt on any given day. His many training partners would also influence his workouts.

That said, Arnie DID have a favorite chest workout, and that’s the one we’re going to share with you today!

Surprisingly, given Schwarzenegger’s incredible chest, his pec workout isn’t especially complicated. Nor does it involve any exotic training methods or high-tech machines. In fact, it’s a fairly standard workout that even many novice bodybuilders could follow, albeit with a few less sets. 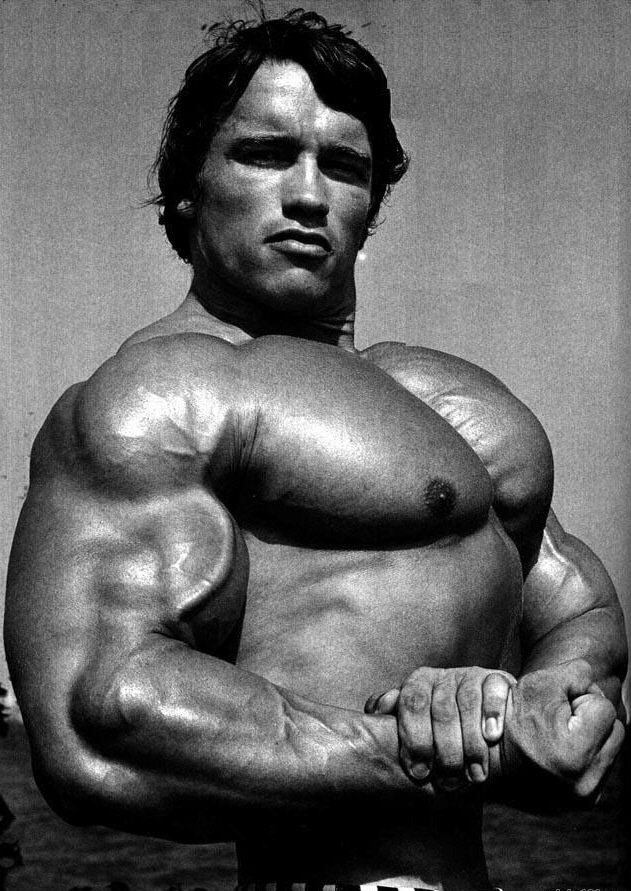 However, Arnold trained with extreme intensity, focusing very much on the mind-muscle connection to ensure every rep was as productive as possible. Remember, too, that Schwarzenegger trained his chest twice a week, and had fantastic muscle-building genes. He was destined to be a champion bodybuilder.

Four exercises for the chest might not seem like a lot. Still, each one hits the pecs from a different angle and combined to develop what was arguably one of the best chests in bodybuilding.

A lot of fitness experts watching Arnie train are quick to point out how he often cheats or uses loose form to complete his reps. While that may be true, it’s clear that Arnold’s training techniques worked for him.

However, for safety, most lifters should use the correct training form to minimize the risk of injury.

So, follow the instructions below to ensure your workouts are both productive AND safe! 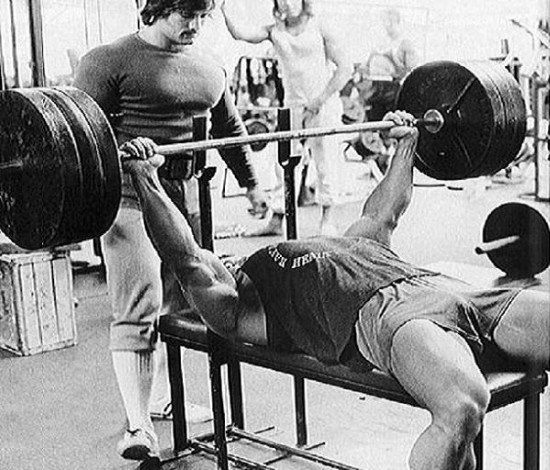 While Arnold Schwarzenegger sometimes used a Smith machine for bench presses, more often than not, he just used a regular barbell.

He started with a light weight for high reps and then pyramided up in weight and down in reps over several sets. Rests were typically no more than a minute or so, and he frequently supersetted chest training with back exercises. Sets often ended with forced reps, where a training partner would help him lift the weight, and he’d then lower it unaided.

To keep the tension on his pecs, Arnie often did three-quarter reps of bench presses, where he’d push the bar partway up but stop short of lockout.

Learn how to do bench presses here.

To emphasize his upper chest, Arnie used a bench fixed at around 45-degrees. This is quite steep and is another potential cause of shoulder pain. If you suffer from sore shoulders, you’ll probably find a 30-degree bench angle more comfortable.

Most people do dumbbell flyes using light to moderate weights. However, to sculpt his enormous chest, Arnold Schwarzenegger liked to go heavy, using 65 to 85-pound dumbbells. This not only illustrates how strong Schwarzenegger was but is also why he often had to resort to less-than-perfect form for some of his exercises.

That said, using heavy weights for high reps, as Schwarzenegger often did, will challenge your muscles like nothing else can, forcing them to grow.

Arnold usually did his dumbbell flyes with his feet OFF the floor. This creates instability which may increase pec engagement. However, if you don’t want to risk losing your balance and falling off your bench, you should keep your feet flat on the floor.

Learn how to do dumbbell flyes here. 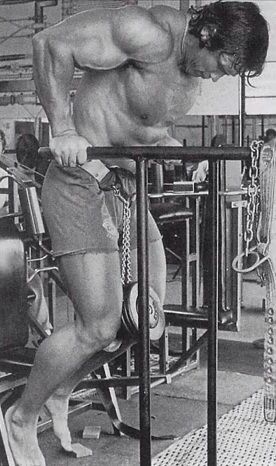 Dips are an often-undervalued chest exercise. Done with a large range of motion and plenty of weight, dips are great for building a bigger chest and especially useful for targeting the lower pecs.

Again, Arnold Schwarzenegger liked to use heavy weights and do high reps – working up to 85 pounds for 10-15 reps. As well as the chest, weighted dips are also an excellent triceps builder.

While dips are every bit as effective as the bench press for pec training, they can be hard on your shoulders. That’s even truer if, like Arnie, you descend deeply to really stretch your chest. So, take care if you do weighted dips. Consider doing decline dumbbell bench presses for a more shoulder-friendly lower-pec workout.

It’s impossible to deny the impact Arnold Schwarzenegger had on bodybuilding. In fact, without the Austrian Oak, it probably wouldn’t be the sport it is today. Arnie had one of the most memorable physiques, and while his final Mr. Olympia win was controversial, there is no denying that he was one of the best bodybuilders in history, if not THE best ever.

And that makes his chest workout all the more surprising. There are no advanced training techniques, exotic exercises, or fancy machines – it consists of exercises that every lifter should be familiar with. Yet, using this no-frills approach, Schwarzenegger sculpted an almost unbeatable chest.

That said, Arnold’s chest workout does involve a lot of sets so, if you try this workout, maybe consider reducing the volume by 50% to avoid overtraining.