The bodybuilding legend offered a few useful fitness tips for anyone looking to lose weight and live longer. 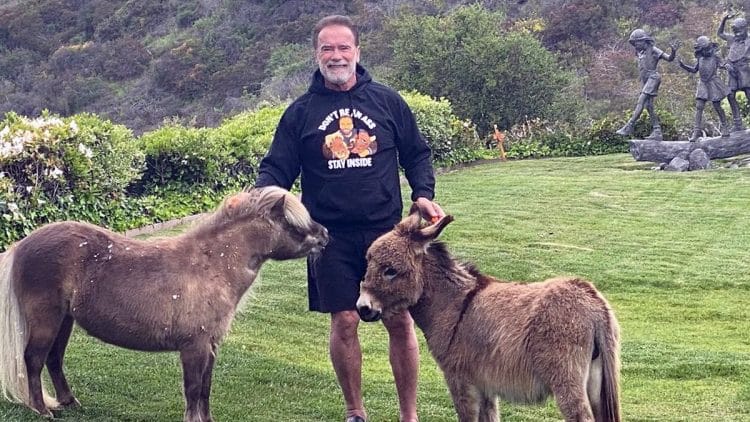 Arnold Schwarzenegger is still committed to fitness and bodybuilding at the age of 75. In a recent newsletter, Schwarzenegger stressed the importance of walking daily/eating high-protein meals for living a longer and healthier life.

Schwarzenegger established himself as one of the greatest bodybuilders ever from the 1960s to the 1980s. During his illustrious career, Arnold captured the prestigious Mr. Olympia title on seven occasions (1970-1975, 1980). He shared the stage with a number of Mr. Olympias like 1983’s Samir Bannout, three-time winner Frank Zane, and 1981 champion Franco Columbu.

While he’s long stepped away from competing, Schwarzenegger still represents the bodybuilding community with pride. In fact, he helped create the Arnold Sports Festival, an annual extravaganza that features bodybuilders, strongmen, powerlifters, and other athletes competing in various sporting disciplines.

In addition to his love for bodybuilding, the Austrian native credits his overall success to fitness, which he says helped him preserve his health. He’s been open about how his goals have changed since getting older. Schwarzenegger specified that he prefers machines instead of free weight nowadays to avoid injuries.

In his latest newsletter, Arnold Schwarzenegger shared some useful tips for maintaining one’s health and stressed the importance of daily walking/high protein meals for boosting longevity.

Arnold Schwarzenegger: ’10-15 Min of Daily Walking Can Reduce Mortality by 40%’

According to Schwarzenegger, walking 10-15 minutes a day can preserve one’s life dramatically. He cited a study from August 2022, where researchers suggested the magic number for walking is between 7,000 – 9,000 steps daily.

“High-intensity exercise gets the headlines, but good old fashion walking might be your best lifeline. Researchers reviewed data on more than 47,000 people over 7 years to determine the impact of step count on mortality. And the numbers say a daily stroll is an effective way to live longer, even if you change nothing else. Growing up in Europe, walking is totally normal once you finish a meal.

The bodybuilding legend added that even small changes to someone’s daily step count could significantly improve their potential lifespan.

“The good news is that even small changes to your daily step count can boost your lifespan. Compared to the lowest amount of steps (~3,500 steps), adding a little more than 2,000 steps per day — about the equivalent of 10-15 minutes of walking — can reduce all-cause mortality by an extra 40 percent.”

Schwarzenegger cited another study and mentioned that participants whose protein intake increased moderately were likely to lose up to 11 pounds. He added that those who ate more protein daily, were consuming less calories on average.

You can thank the science of fullness. Protein reduces hunger, and those who bumped up their protein ate approximately 450 fewer calories per day,” shared Schwarzenegger.

Schwarzenegger advised his followers not to overthink dieting.

“The key is don’t overthink it. In the study, participants swapped cream cheese for eggs at breakfast (they still ate bread), added cheese to a turkey sandwich (ditched the mayo and chips), and had beef lasagna for dinner (instead of regular pasta).”

Even with a busy schedule, Arnold never misses an opportunity to exercise. The last time fans heard from the movie star; he showed off his strength with a Christmas training session. At 75 years old, Arnold is committed to longevity and health.

In October, Arnold put his philanthropy hat on and offered special training sessions for $150,000 as part of a kids charity after school program. A number of stars participated in the After-School All-Stars event including action-icon Sylvester Stallone, Danny DeVito, and Dolph Lundgren, as well as Arnold’s co-stars from his latest Netflix project, “FUBAR.”

Despite being in his mid-70s, Arnold Schwarzenegger doesn’t appear to be slowing down. In the coming months, his focus will be on bringing an exciting 2023 Arnold Sports Festival in March.