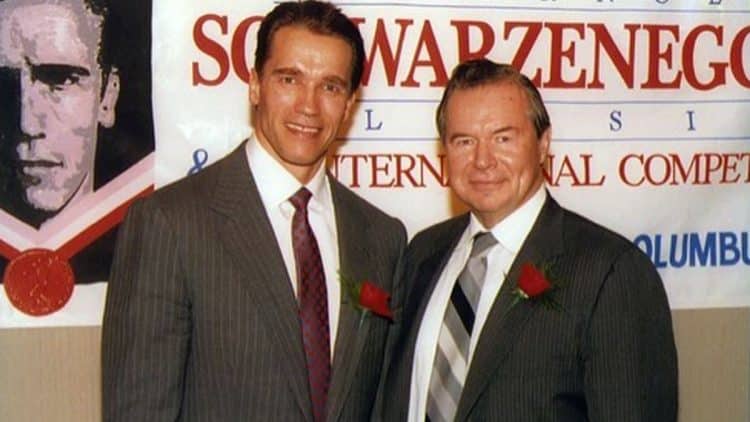 Bodybuilding legend Arnold Schwarzenegger moved on from competing decades ago, but his passion for bodybuilding and fitness hasn’t gone anywhere. In a statement issued in Arnold’s Newsletter, Schwarzenegger shared a heartfelt message on the tragic passing of his longtime friend and mentor Jim Lorimer.

Arnold Schwarzenegger dominated the Men’s Open stage during his time in the sport from the 1960s-1980s. The seven-time Mr. Olympia winner helped bodybuilding break into the mainstream with his charismatic personality and brash attitude. Featured in the iconic documentary Pumping Iron (1977), Schwarzenegger and Lou Ferrigno took the sport to new heights.

The International Fitness and Bodybuilding Federation (IFBB) celebrated Schwarzenegger’s success in the sport by launching an annual multi-sport event named after him called the Arnold Classic. The contest is considered to be the second most prestigious event in bodybuilding after Joe Weider’s Olympia Fitness & Performance Weekend. Arnold joined forces with bodybuilding pioneer Jim Lorimer to co-found the festival in 1989.

The Arnold Sports Festival has proven to be a hotbed for surging talent and regularly showcases budding competitors who have gone on to win the Olympia. At the last event in March, Brandon Curry claimed victory at the contest for a second time.

On Nov. 25, Schwarzenegger addressed the tragic news of Lorimer’s death at 96 years old. He lauded Lorimer’s tireless efforts in promoting women’s sports from the early days. Lorimer founded the Ohio Track club women’s team and also served as the chair of the US Olympic Committee for women’s sports.

In a statement issued in Arnold’s Newsletter, Schwarzenegger shared a heartfelt message after the death of Jim Lorimer.

“Jim Lorimer will live forever through the millions of people he inspired to join our fitness crusade and tune into this little niche sport called bodybuilding. I am devastated that I won’t sit with him again and hear his wisdom, or critique bodybuilders together, or just laugh and laugh. My thoughts are with Bob, Kathy, Jeff, and the whole Lorimer family, but I also know that Jim isn’t gone. Jim lives on in every member of his family, and he lives on in me. He’s one reason I would never call myself self-made.

When I met him 52 years ago at the Mr. World bodybuilding championship he organized so fantastically in Columbus, Ohio, I immediately knew Jim would be a big part of my life. I told him when I retired from competing, we would be partners and promote bodybuilding together. And starting in 1976, we did just that with a handshake agreement for more than 50 years, expanding from a bodybuilding show that drew 2,000 people to a sports festival with over 200,000 visitors and more athletes than the Olympics (more than 20,000), while we branched out from Ohio to inspire people on every continent except Antarctica.

When I was appointed the Chairman of the President’s Council on Physical Fitness and Sports by President Bush in 1990, I knew that I needed Jim by my side, and boy, was I right. He helped make the impossible possible with his brilliant legal mind when we worked with all of the federal agencies and hundreds of bureaucrats to organize the Great American Workout on the White House lawn. Jim also lives on in every single person he inspired to live a healthier life. Some people assume Jim started promoting sports with me – that couldn’t be further from the truth. His sports and fitness crusade started much earlier, when he was lifting up women’s track and field.

In the 50’s and 60’s, when promoting women’s sports wasn’t as popular as it is now, Jim was a pioneer. He founded the Ohio Track Club woman’s team, and then he became the chair of the US Olympic Committee for Women’s Sports.

“In between his jobs as an FBI agent and an executive at Nationwide Insurance, he helped turn around our Olympic team so we could start beating the Russians,” added Arnold Schwarzenegger. “He became so legendary for his promotion of sports that he was asked to host the 1970 World Weightlifting Championships. He decided to host the Mr. World competition to sell more tickets, and the rest is history. To Jim, the Mr. World was just a way to pack the theater, but to me, winning that title changed my life.

I beat Sergio Oliva for the first time, and I saw how well Jim treated the athletes and made the commitment then and there to work together to elevate the sport of bodybuilding. It was one of those magical moments, and it was destiny that we met, but it was Jim’s fanatical commitment to sports and fitness that laid the foundation for our fate. I will miss his wisdom, I will miss his mentorship, I will miss his kind, kind heart. I will miss his sense of humor and his desire to make the world a better place and his friendship. But Jim will always be with me. He helped make me who I am.

He’ll always be with all of us. So while I grieve today, I will also remember how lucky I was – how lucky the world was – to have so much of this wonderful man’s time. This Thanksgiving, I remember Jim Lorimer, and I am so, so grateful he was such a big part of my life. Thank you, Jim.”

Jim Lorimer goes down in the history books as one of the most important figures in bodybuilding. He helped elevate the sport in popularity and provided a major platform for the next generation of bodybuilders at the Arnold Sports Festival.

Speaking of Arnold Schwarzenegger, last month, former UFC two-division champion Conor McGregor shared a jacked physique update where he flexed while away on a sabbitical due to injury. McGregor described himself as a combination of Schwarzenegger and Bruce Lee.

Fans last saw ‘The Austrian Oak’ spread the holiday cheer with a Christmas workout while inviting fans to join in on a fitness crusade. In the end, Arnold is grateful for his close friend Lorimer’s contributions to the sport.